Nerd Plus Ultron: There Has to Be More to ‘Avengers: Age of Ultron’ Than Printing More Money 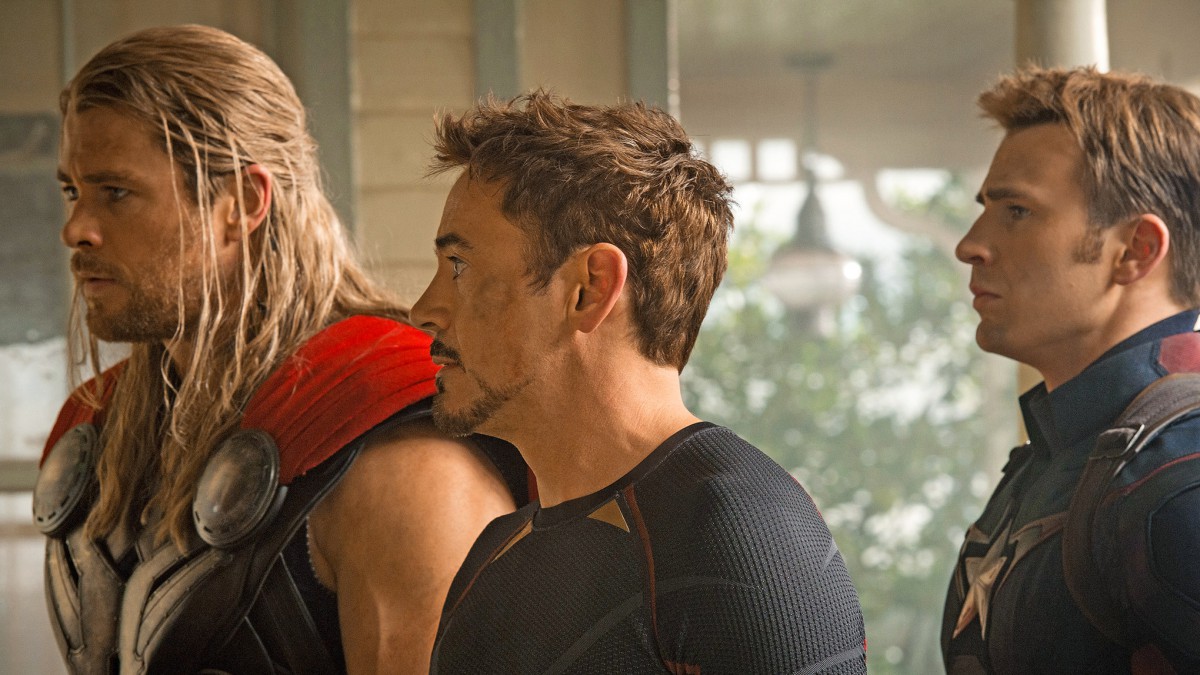 When does a movie’s sense of romance collapse into abject mawkishness? When do we inch back from the edge of our seats and suppress the urge to laugh? If the movie is Avengers: Age of Ultron, it’s somewhere in the middle, about the time when Linda Cardellini shows up as Mrs. Hawkeye and prevails upon her superguests to repair tractors and chop wood (Captain America simply rips up his logs). The gang has demolished another city — this time, one somewhere in Africa that wasn’t even done developing — and the only earthly haven from the fallout is the secret farmhouse where Hawkeye (Jeremy Renner) stores two kids and a wife, whom Cardellini can’t help but play as though she were married to Mike Brady. Her husband is weighing whether to hang up his bow and quiver, thus inspiring her to begin one conversation by saying, “You know I support your Avenging.”

Furious 7 cleverly and respectfully established that potential plotline a few weeks ago for the late Paul Walker, whose character deliberated an exit from whatever it is those guys do. Age of Ultron’s doting over Renner actually made me stop and ask whether something terrible had happened to him during the filming of this movie. The difference is that Walker was an integral part of his multibillion-dollar action franchise. Renner’s place in the Marvel Universe seems more expendable: He’s a redshirt with magnificent arms.

But Hawkeye is given prominence in a movie that lasts for two hours and 21 minutes and features more stars and characters than a 1970s disaster movie. Presumably, these scenes of emergency rustication — set amid the same signposts of beating-heart Americana you find in science fiction lately (Looper, Transcendence, Interstellar) — are meant as a respite from the movie’s stockpile of chaotic spectacle. At the culmination of that mess in Africa, Iron Man (Robert Downey Jr.) summons his best toys to quell a run-amok Hulk, who’s been placed, along with the rest of the group, under some kind of hallucinatory spell by the female half (Elizabeth Olsen) of a set of testy Eastern European twins.

This sequence looks and feels as good as anything in the previous Avengers movie, from 2012. Computer-generated images acquire bruising tonnage while also being vividly defined in a style that exhilaratingly approximates the experience of reading an actual comic book. Three years ago, that verisimilitude was an achievement. Writer-director Joss Whedon and hundreds of technicians had improbably re-created the intangible thrill of illustrated action. Now, after a dozen more superhero films, a third of which serve as appetizers for this second installment, you start to feel like you’ve eaten too much. This latest, most overwhelming iteration of the Marvel blockbuster began, in 2008, in mutual gluttony: We wanted more superheroes as much as the studio did. Seven years later, with movies and network shows and a streaming series (and comic books), I don’t know when more is going to end. Will there be no subsequent stand-alone series that won’t be co-opted for cross-promotion, for synergy?

At this point, “more” has mutated into “too much.” That “too much” has consolidated Hollywood’s global hegemony so thoroughly that the impossible physics of perpetual motion has been achieved. But where does that leave these movies on a scene-to-scene basis? Cardellini draping herself over Renner for a couple of scenes as a cooldown between flare-ups encapsulates the lugubriousness that now has set in. With a bad issue of a comic book, you can whip through, shrug, and hope for something better the next month. But these behemoth movies — megabusters — have to seem worth the bother. The genre is an economy unto itself: too big to fail. (“Next month,” after all, is more like two or three years away.) They have to seem busy and stuffed with action. Of course, by packing in all of that action, they risk excess.

Not terribly far into Age of Ultron, everyone sits around the Avengers headquarters in street clothes, drinking and bantering. Don Cheadle is there as vice–Iron Man. So, too, is Cobie Smulders’s agent of S.H.I.E.L.D., looking like an agent of Pan Am. Thor (Chris Hemsworth) has placed his hammer on a table, and a montage breaks out in which some of the boys try, in vain, to lift it. (Scarlett Johansson’s Black Widow smells a pissing contest and chooses to hold her nose.) Chris Evans’s Captain America makes a little headway, inspiring Hemsworth to send us a flash of emasculative worry, then fake certainty. The sharpening of Thor’s macho prissiness is mostly a thing. His size is a joke on his theater-geek insecurity.

The previous Avengers installment gave Thor nothing to do. But the upgrade feels like as much the result of a mandate for “more” as everything else in this movie — more plot, more action, more banter, more villains, more everything. When Smulders asks the men where Gwyneth Paltrow, Natalie Portman, and Hayley Atwell are, you have to laugh. Has she seen the poster? Where would you put them? This is a movie ravenously greedy enough to be mistaken for a Nathan’s Hot Dog Eating Contest. As it is, we’re beyond capacity. Officially, Samuel L. Jackson reprises the long-running role of his now former S.H.I.E.L.D. muckety-muck, Nick Fury. But all the expository yammering and grandfatherly uplift he’s assigned to do should be making Morgan Freeman feel litigious. Olsen and Aaron Taylor-Johnson play the Eastern European twins Scarlet Witch and Quicksilver. Before inducing her latest nightmare, she says, “Everybody’s afraid of something.” I’d start with those accents. Other actors visit this movie from the worlds of their ancillary Marvel titles: Idris Elba (Thor), Stellan Skarsgaard (Thor), and Anthony Mackie (Captain America: The Winter Soldier). There are parts, as well — crumbs, actually — for Julie Delpy, Andy Serkis, Claudia Kim, Thomas Kretschmann, and Paul Bettany, whose character would be a welcome new addition in a less tightly packaged product and whose face is covered in cherry Kool-Aid. This movie doesn’t need a director. It needs the fire marshal.

For the record, the director is once again Joss Whedon, who also did the script. And once again, he tries to impose some semblance of fun — if not a sense of order. The opening minutes, especially, have the sort of glibness, epitomized by Downey, that cuts through the grandiosity of that long, opening battle sequence set amid the trees and bunkers of someplace called Sokovia. Downey returns to his normal disrespectfulness, but the increase in banter and one-liners gives so much of the movie the feeling of an awards show. Why should Downey always win every conversation? This still leave Evans as the butt of a castwide running gag. Even Smulders gets in a dig.

In the plot of Age of Ultron — one of them, anyway — Tony Stark, a.k.a. Iron Man, and Dr. Bruce Banner, a.k.a. Hulk (Mark Ruffalo), use the artificial intelligence that Tony has discovered in a gem in a scepter1 to top off Stark Industries’s new global security system, called Ultron. Immediately, Ultron, whose baritone belongs to James Spader, achieves evil A.I. sentience. (Its retrieval occasions the opening action sequence.) Ultron gathers sentience, destroys Tony’s previous A.I., and proceeds to plot a course for Ye Destruction of All Humankind. You can feel Whedon trying to justify the movie’s existence by giving the actors throwaway lines and little romances, touches meant to amuse and humanize. This includes Spader’s Ultron, a villain who thinks and feels and begins putdowns with such things as “I can’t physically throw up in my mouth …” If he knew about the running Captain America joke, he’d have an eye roll for that, too. Hearing Spader is a pleasure. He gives Downey a run for his money in the slickness department. But their wits can’t disguise the familiarity of this enterprise. At some point, Downey feels out a wall while incanting, “Please be a secret door, please be a secret door, please be a secret door.” Lo and behold …

By the time everyone’s at that farmhouse, the movie feels as if it’s in a holding pattern. Whedon has misjudged how much these people’s lives mean to us now. It isn’t that there’s no room for the ordinary in one of these movies. There’s no place for the banal, and banal is what that stretch at chez Hawkeye is. Unless Cardellini is turning into a wasp or a sorceress, why, really, are we here? Whatever was special or new about the superhero movie in the early 2000s, with the release of the first X-Men and Spider-Man movies, has evaporated. Once upon a time, we would have admired that opening sequence, which climaxes with about five of the Avengers running from their respective battles into a single slow-motion shot, as the state-of-the-art technical achievement it is. But now we feel about it the same way Tony Stark feels about that secret door. It’s a cliché. World-saving is no longer a surprise to these characters. It’s work. Grunt work. For them. For us.

Halfway through this second helping, I was thinking ahead to how little reason there would be for a third. I don’t know that I care to watch Olsen wave her arms again until special effects shoot from her. But she’ll be there, as will the handful of characters who pour into the movie’s finale with distressing eagerness. The movie wants to succeed on its own terms. But usually you don’t know what those are. Often they feel like the marketplace’s. Or the studio’s. This argument applies to many movies. But the marketplace is all you sense in Age of Ultron. It’s not Whedon’s movie. It’s capitalism’s.

What Other Cool Stuff Can We Extort From an Increasingly Desperate Jay Z in Exchange for a Tidal Subscription?