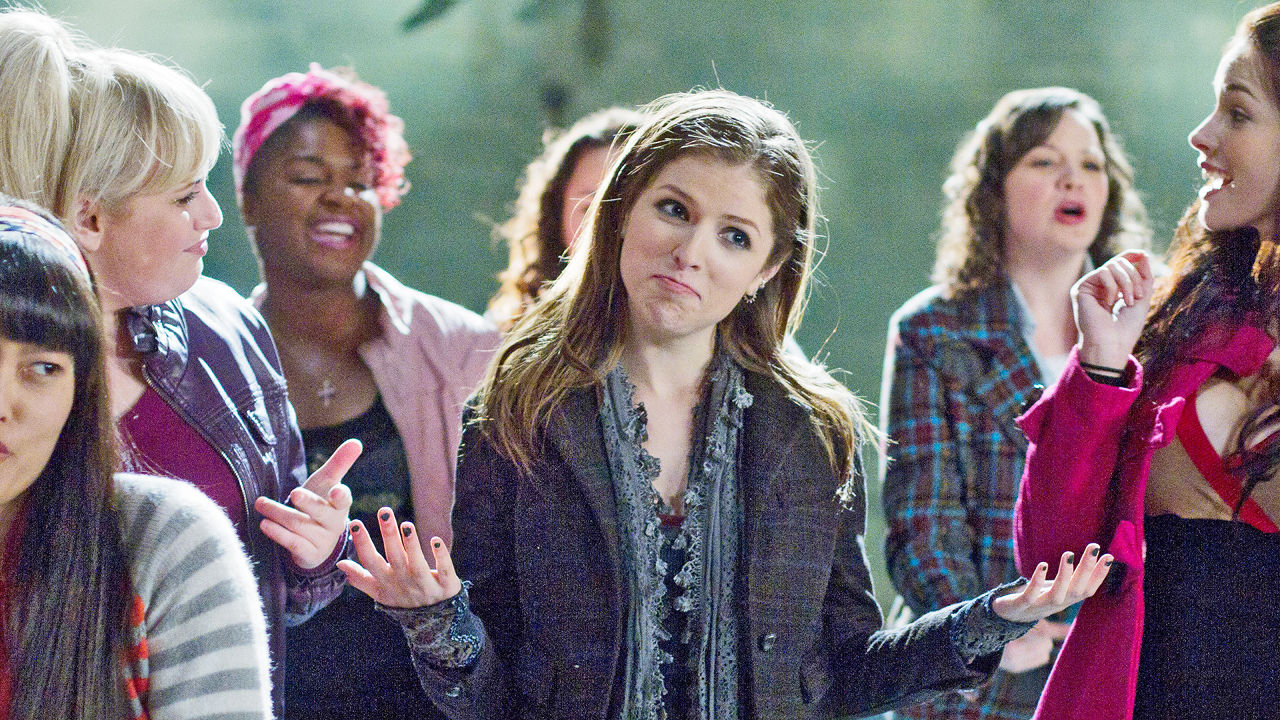 I didn’t watch Pitch Perfect when it was in theaters. I was aware that it existed, I just had very little interest in watching it. I remember seeing the previews with my wife and being like, “Nope, not a chance.” I remember going to the theater for other movies and seeing Pitch Perfect promo posters, the ones that had a picture of the cast and the tagline “Get Pitch Slapped” on it and feeling very good that I’d accurately measured the temperature of a movie by its preview, because “Get Pitch Slapped” is really just a terrible line, so the movie was certainly terrible too. So I didn’t watch it there. I didn’t see it until something like 18 months after it came out. I rented it from Redbox for $1 and watched it at home. And I’ve been mad at myself ever since.

I love Pitch Perfect. I care about it, were I to guess, far more than a 33-year-old Mexican man should. I don’t even know how many times I’ve seen it now. If it comes on TV, I watch it. If I’m writing, sometimes I stream it and let it play in the background. If I’m standing still for more than five seconds, I feel it necessary to watch YouTube clips of it on my phone. After I read last year that they were filming Pitch Perfect 2, I hunted and hunted and hunted on the Internet for new stills or videos or anything. When a video finally did pop up, I emailed my editor the instant I saw it, and then I strongly considered turning in my resignation when he said he thought Bring It On was a better movie. [Editor’s note: Bring It On is much, much better. Resignation still pending.]

In the meantime: a character ranking for the first one.

Pitch Perfect is, of course, a movie about singing. But this is not solely a Who’s The Best Singer? ranking. It can’t be that. That’s too narrow. If that were the case, the winner would be obvious (Cynthia-Rose). It’s also not a Who’s The Most Vital To The Pitch Perfect Universe? ranking. That’s too direct. Were it that, the final tallies would basically be calculated just by counting up who has the most lines in the movie and there you go, there’s your ranking (and Beca’s your winner). This is rounder than that, bigger than that. It’s a very general, very big, Who’s The Overall Best Character From Pitch Perfect? ranking. It takes into consideration those two things, but also more things, things like the person who was most believable, the person who was the most charming and likable, the person who had the most secretly great moments, the person who had the most obviously great moments, and on and on. All of those were considered, then measured (inasmuch as you can measure them), and that’s how their ranks were figured. Off we go:

She was the one who was goofy for sex. Her one good thing was that she’d decided her vagina was male and was also a hunter. While she never explicitly states that it hunts penises, the context within which she exclaims that it’s a hunter leads me to believe so. If it hunted something else, though — say, wild boar — then she’d have moved up several spaces, for sure.

Stacie placed lower than a guy who rides a unicycle.1

Sidebar: There’s a scene where he falls down. I’m still not sure whether it was planned:

I’d always assumed so, because it was so perfectly timed, but I’m not so sure anymore. It feels like if it were, all the guys would’ve turned around when he fell because otherwise, why have him fall? As it is, only the guy nearest the fall is the one who notices. I don’t know, man. I’ve watched it 2,000 times and I still can’t tell. This is our generation’s Zapruder film.

Stacie lost to a guy who rides a unicycle and a girl whose only purpose in the movie is to have super large areolas.

As far as being identified by body parts is concerned, having really well-defined abs is considerably better than having bologna boobs, I figure.

I need for someone to put together a comprehensive ranking of college roommates from movies. I figure Kimmy-Jin probably falls somewhere near the middle. She wasn’t very nice, but she also wasn’t super in-the-way or obtrusive. First place is probably the Lambda Lambda Lambda guys. Last place is a tie between Remy from Higher Learning (he’s the guy who becomes a Nazi and kills Tyra Banks and shoots a few more people and then also kills himself) and the two guys in Dead Man on Campus who try to get a roommate just so they can convince him to kill himself.

He was a Grade A secondhand man. He was also quietly very funny and a talented and vital member of the men’s group. I’m interested in the Donald backstory.

The savant excluded because of his weirdness but OH MY GOD WHEN HE FINALLY GETS TO PERFORM WITH THE TREBLEMAKERS:

It’s a Top Two Singing Come-Up In A Movie Of Ever, matched only by Ahmal hitting the high note during the “Oh Happy Day” scene in Sister Act 2: Back in the Habit:

(You can skip ahead to the 2:28 mark if you just want to see the high note. If you do that, though, you should go on and skip your life ahead to your own funeral, because turns out nobody likes you at all.)

She’s possibly the most talented, most versatile member of the Barden Bellas. She’s completely capable of running the team, and for sure capable of starring in an a cappella performance, and were it not for Beca, she probably would. She’s the Blake Griffin of the group.

I suppose he’s kind of a dick, but let’s not just ignore that he’s the leader of what we’re told is the most dominant a cappella group in the country, and let’s also not ignore that he was picked to sing backup for John Mayer, AND LET’S ALSO not ignore that he left the group and then the group immediately lost their very next competition. He’s talented, there’s just no other way about it. Also, he is an excellent dancer:

I’m  glad he’s back for the new version. 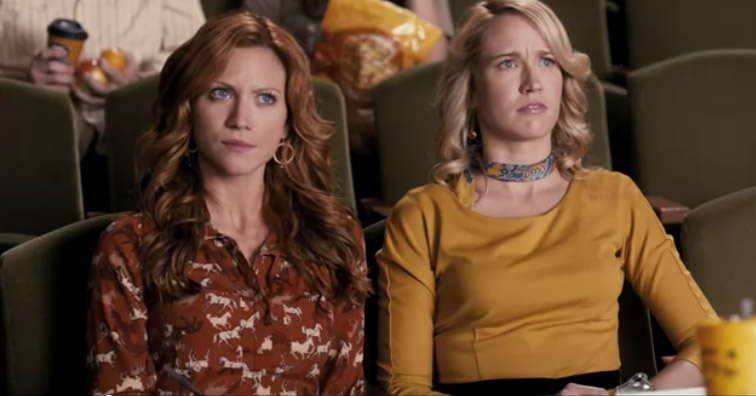 They have to go together, same as John and Gail.

“Yeah, don’t put me down for cardio.”

Nobody has more quotables. Nobody has more pizzazz. Nobody (not named Jesse) has more charm. You know what’s so great about Fat Amy? Her whole role in the movie is to be the funny one. That’s her thing. And a lot of times, when someone’s thing is to Be The Funny One in a movie, it turns into a Try To Be The Funny One thing, and that’s way different and definitely terrible. But that never happens with Fat Amy (née Fat Patricia). She’s always able to do just enough so that she’s more compelling than Just The Funny One. I’m nervous that they’re going to push her too far into GOOFY in PP2, though that’s an observation based almost exclusively on the part in the trailer where she ends up showing her vagina to a bunch of people while she dangles from the ceiling. Either way, she’s a strong third here, and really very nearly leapfrogged Beca to get into second place.

ARE YOU GODDAMN SERIOUS?

How does she not finish first here?

I’ll tell you how:

PLEASE BE MY BOYFRIEND, JESSE.

EVERYTHING ABOUT YOU IS PERFECT, JESSE.

When scientists finally figure out how to make it so that men can get pregnant, the very first call I’m making is to Jesse from Pitch Perfect to see if he’s down.

It’s when Beca is performing the “Don’t You (Forget About Me)” part. If you’ll recall, he was upset with her because she’d been not that nice to him (FOR WHICH I WILL NEVER FORGIVE HER), and so he was not talking to her or really not even acknowledging her. So she’s performing it and he realizes that she’s worked it in there as a sort of apology/appreciation to him. And he considers bucking back against it. But then he finally gives in and raises his hand up in the air as the song hits its peak. The best Jesse moment is right before that, when he gives the guffaw look. It happens here, and it takes him from 1:09 to 1:14 to fully unfurl it:

Dark Bird: The Tallest Man on Earth Spreads His Wings for an Intense, Introspective New Album