Dark Bird: The Tallest Man on Earth Spreads His Wings for an Intense, Introspective New Album 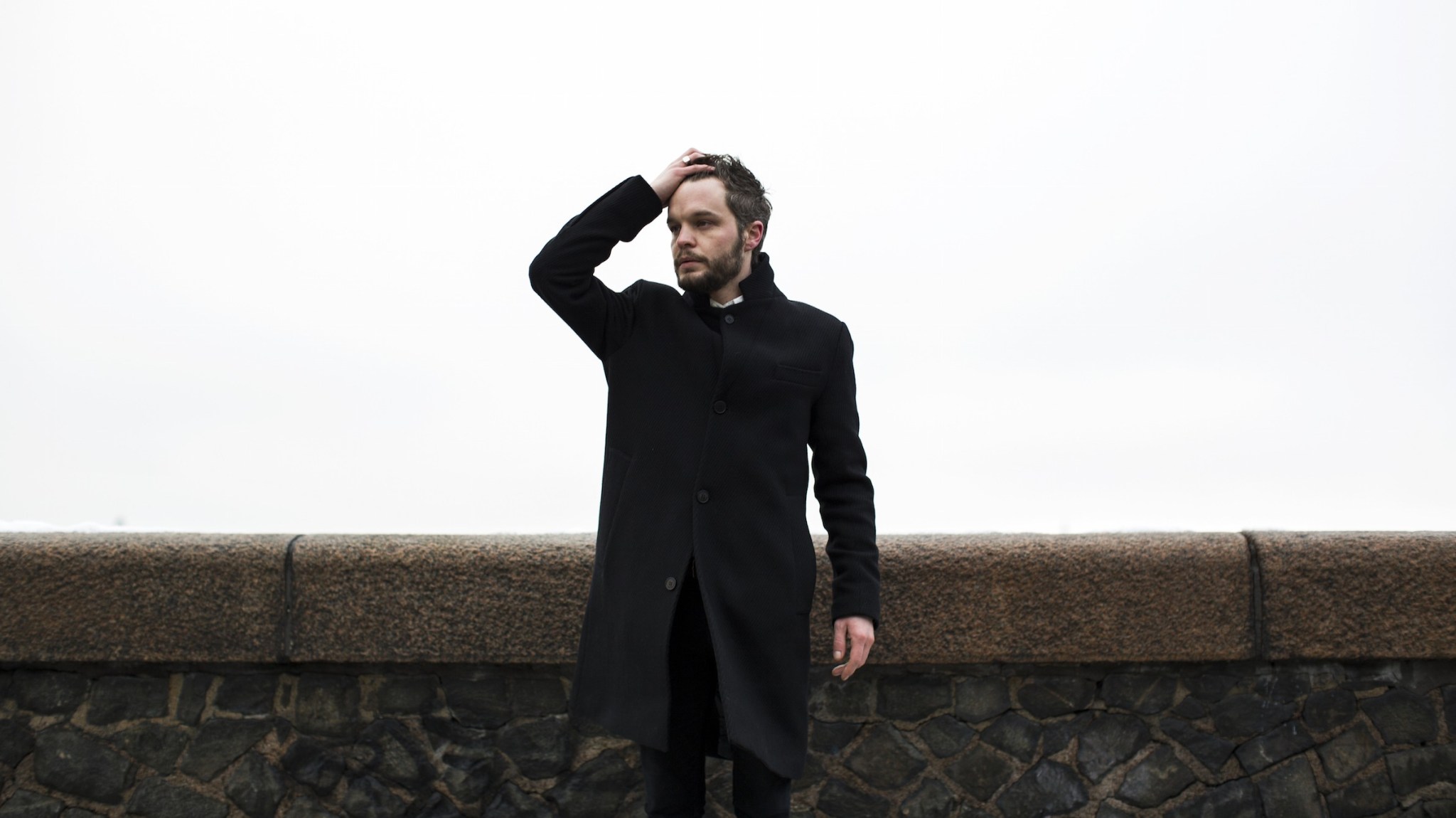 In his songs, nakedness comes naturally to Kristian Matsson. The 32-year-old Swede, who records and performs as the Tallest Man on Earth, began his career nearly a decade ago with just a guitar, some lo-fi recording equipment, and a batch of illusory tunes that seemed to broadcast his inner monologue in real time. “I’m gonna force the Serengeti to disappear into my eyes / And when I hear your voices calling / I’m gonna just turn inside out,” he sings in an impassioned yelp over a furious guitar strum on “I Won’t Be Found,” the first track on his 2008 debut LP, Shallow Grave — a record preoccupied with death, disappearing, and other topics that haunt insomniacs between three and four in the morning.

At his best, Matsson really does turn himself inside out, plugging listeners directly into the live feed of hopes, fears, half-formed thoughts, and non sequiturs tumbling from his subconscious. But when he greets me at the door of a friend’s house in south Minneapolis, Matsson is interested in a different sort of nakedness. Not the emotional or spiritual kind, but rather nakedness nakedness.

It’s an early Friday evening in mid-March. I meet Matsson at the end of an unseasonably warm late winter day, the kind that prompts sun-starved Midwesterners to put on shorts as soon as it hits 50 degrees. Matsson isn’t that crazy — he’s wearing jeans and clutching a brown jacket to his slight 5-foot-7 frame as we walk to the backyard patio. He is staying here as he prepares to tour in support of Dark Bird Is Home, his fourth album, out this week. For the first time, the Tallest Man on Earth will perform as a band; before now, it was just Matsson prowling by himself around the stage with a guitar, like a welterweight wielding a blunt object in the ring.

All folkies seem to make this transition eventually, and Matsson says rehearsals have been “very, very good.” As for the possibility that he might alienate fans in love with the solitary intensity of his previous LPs, “it’s not really a concern,” he insists. “There will probably be people who will be disappointed, but should I stay the same?”

Matsson is itching to shed his clothes and hop in his buddy’s sauna, which is housed in a separate structure adjacent to the patio. Will I join him? It helps him relax. No, I say. Saunas make me pass out. Matsson sips from a can of carbonated water, looking slightly disappointed. I suspect that he is trying to put off the interview. He has reluctantly agreed to only a few of them to promote Dark Bird Is Home.

“I did a lot of interviews in the beginning — a lot of blogs, stuff like that,” he says with a weary grin. “It was just a lot of, ‘So, you like Bob Dylan.’”

Dylan comparisons come out like flies at a picnic if you happen to be a guy with a craggy voice and an acoustic guitar. But Matsson (cough, like Dylan, cough) has always had grander plans beyond being just a solo act. After rebelling as a teenager against the classical guitar lessons his parents imposed on him, by joining a punk band — “I wanted to be Iggy Pop,” he says — Matsson took another abrupt turn in his early twenties toward the Delta blues and Nick Drake. He recommitted himself to guitar, though when he played live, he kept on chasing the spirit of the Stooges.

“When I started doing what turned into the Tallest Man on Earth, I wanted to be a band onstage, but just me,” he says. “I wanted to have the same energy as a band.”

On the second Tallest Man on Earth LP, 2010’s excellent The Wild Hunt, Matsson seemed to be writing songs for a larger-than-life arena-rock group, even as he played them with a busker’s enthusiasm. This is especially true of the climactic track, a stirring piano ballad called “Kids on the Run,” which sounds like a demo for an unrealized epic from Who’s Next.

Shallow Grave and The Wild Hunt garnered positive, if modest, press — it was on the road that Matsson made his bones. He toured wide and far in the early going. The first time I saw him perform, it was a free gig in the late ’00s at a theater in Milwaukee. The audience was made up largely of neophytes, but Matsson put every ounce of his energy into winning over converts. Forming a partnership in 2008 with Justin Vernon of Bon Iver proved hugely beneficial in that regard — as Bon Iver’s opening act, Matsson gained entrée to an exploding audience of people interested in sensitive singer-songwriters.

Indie (or however you want to classify “semipopular” music) has changed a lot since then — earnest guitar-slingers are the opposite of hip in 2015. But Matsson does better than many artists who generate exponentially more hype. His record sales are hardly prodigious — he’s moved around 240,000 units over the course of three albums and two EPs. But on Spotify, his most popular tracks — “The Gardener,” from Shallow Grave; the stunning “Love Is All,” from The Wild Hunt — are well north of 10 million plays. The best song on Dark Bird, the Springsteen-like “Sagres,” is already at 1.5 million. On his latest tour, which launched Wednesday, Matsson is headlining midsize theaters across the country, including historic venues like the Ryman in Nashville and the Beacon Theatre in New York City.

The numbers are important, if only because of how difficult it is to gauge how popular a musical artist is now. Social media is frequently used to measure reach, though tweets and Facebook likes don’t necessarily indicate true engagement in an artist’s work the way, say, going to a concert does. “Feed” fandom can in fact be fleeting and ephemeral. At least that’s how Matsson and his longtime manager, Niclas Stenholm, see it. While Matsson maintains a Facebook page with more than 345,000 likes (or rather, his people do), his Twitter remains inactive three years after he signed up. (Over 10,000 followers are still waiting for Matsson’s first tweet.) Stenholm calls it “an Amish approach to social media.”

“I think of it as a challenge: How successful can you be at what you do without fame?” Matsson says. “Because what is fame needed for? To get into parties?” He laughs. “There’s so much information going on, so much that gets thrown at you, like, Here’s my new thing. What if silence [is] louder?”

In 2013, Matsson finished a tour cycle in support of his third album, There’s No Leaving Now, which was inspired in part by his recent marriage to fellow singer-songwriter Amanda Bergman. Matsson’s career was going well — the venues he was playing were getting “bigger and bigger and bigger,” he says. But the solitary man was feeling lonely out on the road.

“You have a great show and you’re buzzing with some kind of electricity. But then everyone goes home. They go home and get to sleep in a bed with the ones they love. And I just stand there with so much adrenaline going on,” he says. We’re inside now — the sun has set, and the brisk evening air has chased away illusions of a back-patio hang.

“I tour with a beautiful crew, but there were many times [where I] played really big shows and you’re just by yourself in the dressing room. You just stand there, like, Is this success? How do I celebrate this? [I was] just longing to have a little family on the stage.”

Matsson’s friendship with Vernon is what brought the Swede to Minneapolis — his new backing musicians have played in Bon Iver and other Vernon-shepherded satellite acts. Matsson wound up doing overdubs and recording vocals for Dark Bird at Vernon’s studio in northwestern Wisconsin, after laying down basic tracks in Sweden.

Matsson prefers to do his vocals away from home, because otherwise “I’m too relaxed,” he says. “If I was to sing now in this room and it was just me here, I couldn’t sing nearly as well as I could in a live show, just because you have to be at your … I don’t know if you want to impress? I don’t know if it’s that simple, but you try harder and you just make it work.”

Even by the dour standards of a Tallest Man on Earth LP, Dark Bird is loaded with sorrow. The primary influence on the album is the dissolution of Matsson’s marriage, which prompted him to rewrite songs he had planned to record. Matsson isn’t a literal storyteller, so a line like “I’m still a bunch of memories and shit that I believe” (from “Darkness of the Dream”) derives its power from the conversational manner in which Matsson delivers it. Musically, Dark Bird expands Matsson’s palate considerably, moving beyond threadbare folk to a heartland rock sound, even while Matsson’s vocals ground the record in his usual introspective zone.

The hardest song for Matsson to finish was the title track, in which he directly addresses his ex-wife. Between elliptical metaphors are lines that are strikingly straightforward: “No, this is not the end / No final tears that we need to show / I thought that this would last a million years / But now I need to go.” At Vernon’s studio, he broke down while trying to record his vocal.

“I was married to a person — she should be here to talk about this — but we do the same thing, so it’s very hard,” he says. “It doesn’t have to be drama or specific things that happened. We’re friends, [and] you can’t take care of your friends in the way that you’d like because you’re traveling.”

“It’s therapeutic while you’re doing it, but it doesn’t really help you solve anything. It’s a good process, it’s very nice when you do it. But afterwards, you’re not healed from it.”

I sense that Matsson is pulling away. He’s suddenly cagey — when I ask about his parents, he pauses, thinks for a moment, and says, “I sort of don’t want to talk about that.” Matsson doesn’t like going to these places with strangers when he’s not onstage. There’s no need. His silence is strong.

Grantland Summer Movie Preview: ‘Talk Me Into This’