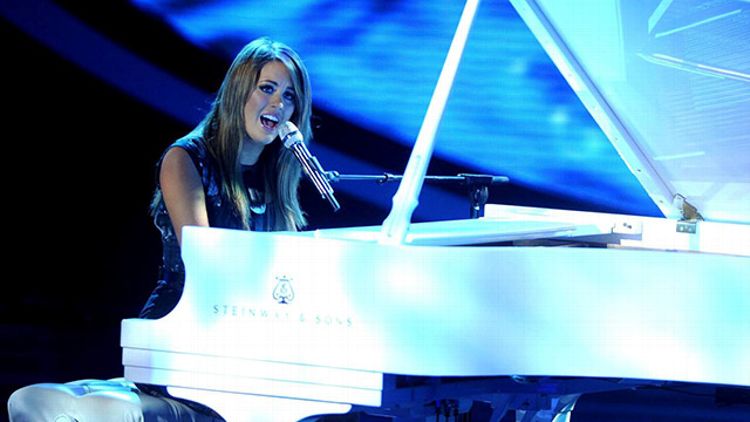 Whatever doesn’t deafen you makes you stronger: Grantland’s Jay Caspian Kang, Mark Lisanti, and Emily Yoshida have returned, bowed but not broken, to tackle another season of American Idol. They don’t think they can make it, and with the judging panel in crisis, they may never have that recipe again.

Is there any way Angie doesn’t win this? She got not one but two “In It to Win It”s from Randy Jackson last night.

Yoshida: Hey, Mark. While I won’t say that getting an “In It to Win It” from Randy is NOT a meaningful thing, I’d like to also point out that Randy whipped out a new catchphrase last night, and Angie was not at the receiving end of it. “Ten out of 10 out of 10.” Think about that for a second. No, really. Try to picture it in your mind.

Kang: It’s like a tattoo of an M.C. Escher drawing on fire with orange flames shooting out of the staircases. Ten out of 10 out of 10 = 42 and the secret of the universe has been solved.

Can I whine here and say that I think Angie sings every song in exactly the same way and that she could sing “Midnight Train to Georgia” and Ani DiFranco’s “32 Flavors” in succession and they would sound exactly the same? She just sort of wails around in a minor key and then fills in her voice and goes whoa-whoooooa-oooooh and we’re all supposed to be impressed because who has heard from Tori Amos in the past 10 years? She will most likely win and reinvent herself as some sort of Disney-fied (oooh, just received e-mail from parent company … Let’s see here … ) — Disney-fied MEANING AWESOME — version of Taylor Momsen and we will have to hear songs about her heart ripping in two and the puddles of something spreading on the floor whooooa-ohhhhhhh because I might not really enjoy Angie and her bright-bright teeth, but even I know that she’s got some commercial appeal.

Lisanti: I don’t know how I’ve come to be this group’s designated Angie apologist. You say FORTY NICE THINGS about a nice lady singing behind a piano on the television, and you’re up all night pricing white Steinways online just because they coincidentally look elegant in anybody’s living room, and suddenly you’re “Team Angie.” I get it. We have a desire to put labels on everything.

The Dawg was riding hard for Angie. No one’s saying that he’s a queenmaker, because the voters don’t even acknowledge the existence of the judges, but it’s hard to argue with the math. Ten out of 10 out of 10, over a billionty percent yes, times “In It to Win It” squared, well … I wouldn’t bet against that if I had any idea of what it means.

She won the night, handily, and let’s leave it at that. Also, the piano arrives tomorrow.

What do you think about this J.Lo replacing Mariah story? Would that even solve anything?

Kang: This is how it would work: “Mariah” walks out onto the Idol stage after one of the performances (probably Angie). A mash-up of “Vision of Love” and “Jenny From the Block” plays in the background. After taking one last loving look at the audience, “Mariah” reaches into her bodice and pulls out a long paring knife. She proceeds to saw herself in half. Then some chrysalis butterfly stuff happens and J.Lo steps out of the husks of Mariah (THE NEW BORICUAFLY) and reveals — just kidding! — it was her the entire time.

I still think Mariah was a better judge than Kara DioGuardi. They both rambled on for a really long time, but at least Mariah didn’t humiliate herself by stomping around onstage in a bikini. Also, Mariah gets a lifetime pass for me for like 40 different reasons, including “All I Want for Christmas Is You,” “Vision of Love,” “I’ll be There (featuring Trey Lorenz),” and pretty much everything else.

Lisanti: With this palace intrigue now out in public, Mariah’s sudden attempts at actually participating in the show make sense. Two weeks ago, she did mention on-air that the producers went to her with a delicate request that she “start doing her job.” Now I suppose we know that request involved Nigel Lythgoe showing her that he has J.Lo on speed dial and dropping hints like, “Trust me, she doesn’t have anything better to do.” The result has been a more engaged Mariah; no, she doesn’t have anything to say beyond the usual, bland affirmations, but at least a large number of words are spilling out of her mouth and we’re not getting as many reaction shots that catch her getting blowouts at her seat during the duets.

Yoshida: Mariah and J.Lo are basically the same generically encouraging divas, but one of them thinks she still has a brand to protect and one of them doesn’t. I would take 10 Steven Tylers in drag before J.Lo as a Mariah replacement.

Is the show beyond saving?

Yoshida: No. Idol is going to last forever and ever and ever, just like Star Search and American Bandstand and Fraggle Rock.

I think a more appropriate question might be “How slow and painful should the death of Idol be?” At this rate we’ll probably continue getting new seasons for another three years or so, till the average audience is down to about the level of a Greenblatt-era NBC sitcom, then there will be a tearful cancellation announcement on Vine, then we’ll get another “Farewell Season” with three times as many LaToya London guest appearances as Season 12, and we’ll all watch in horror as the confetti falls on the final victor and Ryan Seacrest lowers his head and powers down one last time. Unfortunately, so few people will be watching that when I run out into the streets with a foaming bottle of Andre and an American flag, there will be nobody there to celebrate with. But that’s the real benefit to Fox of running Idol quietly into the ground instead of beheading it in the town square: denying us our victory party.

Kang: Hmmm … doesn’t seem like this question is really about “the show,” is it?
Lisanti: I think that as the audience continues to shrink each season, they’ll just keeping cutting the budget to keep things profitable, until all that’s left is one contestant per four-hour episode lip-dubbing along to YouTube videos, and a first-generation iPad propped up on the judges’ table showing Twitter results for the hashtag #pleasekillusnow. Ryan Seacrest will host as if nothing has changed, and be great at it.

Ryan Seacrest teased a “twist” in the results show tonight. What do you think it is?

Kang: Mariah joins the contestants in the competition! Do you think she’d win?

Yoshida: The entirety of Season 12 existed in a snow globe on the bedside table of a young patient at the Los Angeles Children’s Hospital.

Lisanti: Jimmy Iovine removes his baseball cap, revealing that the top of his skull has been removed and a tiny Simon Cowell in a glass box has been surgically implanted into his brain.

Kang: Sadly, I think Amber is going home, which is too bad because Kree is about one fake scowl and flat note away from turning into the worst Wynonna Judd drag queen in the long history of Wynonna Judd drag queens. Somewhat as an aside, why do Idol contestants keep singing “MacArthur Park”? Seriously? How do you connect with these lyrics? “I left my cake out in the rain. And I’ll never have that recipe again?” Donna Summer is dead (R.I.P.); please stop with these weird butcherings already.

If Kree makes the finals (Kree is going to make the finals), I’m going to plotz.

Yoshida: Wait, before I answer this, let me talk about the actual show last night for a second. Couple things.

OK. I actually think Kree will be out this week, just because she’s the new Vote for the Worst pick and at this point in the competition that’s usually as good as a ticket home. But “MacArthur Park” might have been instant death for Amber, so who knows.

Lisanti: I think it’s Amber, if only because the stylist’s multiple attempts to dress her as the young Whitney Houston went completely uncomprehended by tween voters.

But it also might be Kree. Which will result in Nicki Minaj rushing the stage, tearing out her extensions, and screaming “KREEEEEEDOMMMM!!!!” like Mel Gibson at the end of Braveheart. Also, Ryan Seacrest will be grimly disemboweling her.

Jay Caspian Kang is contractually obligated to mention Ani DiFranco at least twice per season.
Emily Yoshida is a member of no fewer than three different Eiffel 65 message boards.
Mark Lisanti is splayed out atop a white piano. The other patrons at the piano store have called security.

The Americans Season 1, Episode 12: Feelings Come and Go, But 'The Oath' Is Forever