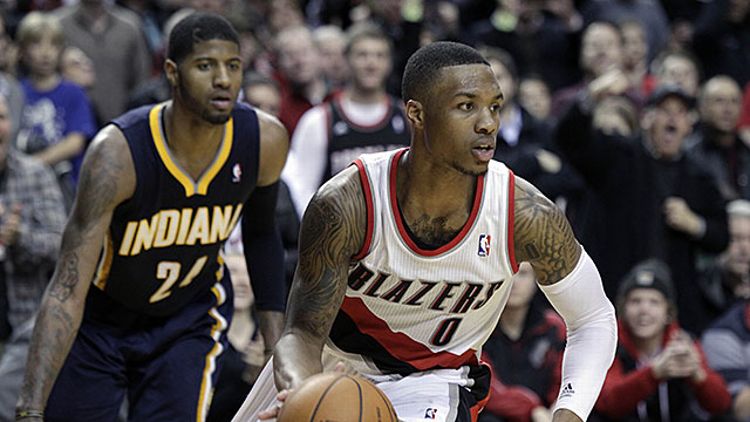 Last week, My Scrabble Friend had an idea. Because I want to steer as far away from endorsing this as I can, I’ll let him explain it himself:

Scrabble Friend: There’s a prop bet for the first team to score 20 points in a game. These lines actually carry odds on them, roughly 20 percent adjusted from the game’s original money line. So, if the Suns are a +400 for the entire game, they’ll be something like +320 to get to 20 first. Basketball is a weird game filled with runs and it’s silly to assume that any team in the NBA would really be +320 to get out to a quick start and put up 20 before the other team wakes up. As far as my research finds, the underdog wins this bet 80 percent of the time. The research in question started last night, when I bet five underdogs, four of which hit, hence the 80 percent. We will call the bet “Death Race.” Small sample sizes are for nerds.

My response: Prop bets are all stupid.

His rebuttal: Maybe they’re not?

I was convinced. For the next few hours, we researched the points-per-minute for the starting units of every NBA game and went back as far as four games of play-by-play data before getting bored and looking for a spreadsheet and/or asking interns if they knew of an “algorithm” that would result in a thumbs-up or a thumbs-down for our idea. When all that failed, we decided that the only reasonable thing to do would be to bet an equal amount on every underdog in the “first to score 20 points” prop bet.

On our first day, we cheered lustily as the Magic +200 ran out to a quick lead against the Spurs and then watched in horror as five of our other six bets lost, giving us a net loss of roughly four betting units. The experience was enough to turn us off the practice, which is too bad because the next day the underdogs hit all over the place.

There’s an argument to be made — one I won’t make — that Death Race is actually a smart bet. If you do actually go back and look over this year, you’ll see that bad teams have gotten off to quick starts, especially running bad teams like the Sixers and the Suns (although it might be time to nudge the Suns into the “Wait, Aren’t We Supposed to Be Tanking?” category). But to really follow this bet, you have to believe that a team’s adjusted odds for outplaying their opponent change by 20 percent or more when the time span gets reduced to 20 to 30 possessions. There’s no real evidence this is true — sure, there’s more variance in the result, but probably enough to overcome the adjustment Vegas already makes for these bets.

One nice side benefit: If you’re one of those people, who, like myself, have parents who live in the middle of nowhere and you’re stuck on a geriatric island off the coast of Washington for a week and the sun is going down at 4:30 and you have nothing to do but think of funny nicknames for the dog and watch League Pass, Death Race provide a nice jolt to your day. As in, you can just watch the first 10 or so minutes of an NBA game before flipping to the next bet you’re going to lose. It’s a fun, truncated, but ultimately stupid way to watch a basketball game.

To test the ultimate “fun” of Death Race, My Scrabble Friend and I left our respective extended Thanksgiving weeks and drove from Seattle to Portland to go watch the Blazers-Pacers game at the Moda Center.

People of Portland, I enjoy your vegan meatball sandwiches and your solid craftsman houses, but I wonder why so many of you still wear Rudy Fernandez and Joel Przybilla jerseys. Is it an ongoing love-affair with the letter “z”? Is it soft, “well-intentioned” racism in the form of jerseys of white players? I don’t get it. You have so many other vintage/hoopster jersey opportunities: Sheed, Duckworth, Alaa Abdelnaby, Ruben Patterson, Z-Bo … Are the Przybilla jerseys “ironic”? Walking around the concourse, it felt as if the bike messengers of Portland were all required to wear a uniform: a Rudy Fernandez/Joel Przybilla jersey, a ponytail stuffed into a backward baseball cap, and some anarchy symbol or another tattooed on the back of the hands.

One other whiny observation before I start: The Trail Breakers, a break-dancing crew that performed in the second half of last night’s game, has a white dude who, I swear, is taller than Robin Lopez. In my game notes, I wrote “Shawn Bradley of break dancing.”

Here is a faithful transcription of the entirety of said game notes:

On to the slobbering over Paul George; over the Blazers fans, who really did seem to push their team to their biggest victory in years; over the incredible free throw shooting down the stretch; over the very weird theater of Carrie Brownstein from Portlandia hanging out in the Blazers’ locker room after the game and introducing her friend to “LaMarcus.” Before last night’s game, My Scrabble Friend and I agreed that the Blazers were “not real.” After watching them hang in the game while being outplayed in the first half (we bet the Blazers in Death Race and lost horribly) and then hit the afterburners on the second night of a back-to-back and blow right by Paul George’s best Reggie Miller impression, well, I still don’t know if they’re title contenders, but I’d be surprised if they didn’t ride a great home record to the 4 seed in the Western Conference playoffs. Certainly Portland fans don’t need me to tell them how great they are, and their reputation certainly precedes them, but at least allow me to say the crowd last night was among the best I’ve ever seen in an NBA regular-season game. Both teams had played the day before in Los Angeles, and both had stretches when they looked tired. I’m generally not one to put too much stock into how professional athletes react to cheering, but there was no denying that the “Sixth Man” pushed the Blazers in the fourth quarter, or that the Pacers, save George, wilted down the stretch.

There are two reasons why I don’t think Portland could be better than the 4 seed. The first, weirdly, is Damian Lillard, who has been jacking up the second-most 3s in the league. Lillard has been at 40 percent from behind the arc to date, but it’s hard to believe that number can be sustained given his significantly lower rate last year and in college. And even if he can level it out to 38 precent or so, I’m not sure if it helps the Blazers to have their point guard taking so many 3s. Lillard’s best asset is his ability to get to the line, where he shoots at close to 90 percent. With his quick first step and his body control, he should be getting there more than 5.4 times per game, a number that trails fellow point guards Goran Dragic, Isaiah Thomas, Chris Paul, Eric Bledsoe, Jeff Teague, Russell Westbrook, and Ty Lawson.

Lillard’s assists are also down this year, and too often he’s drifting beyond the arc and looking for his shot rather than trying to swing the ball to an open shooter. This is all fine now, but if the Blazers were wondering if Lillard was going to trend toward being a shooting point guard or a complete player, they’re getting more of the former. If Lillard keeps playing the way he’s playing right now, he’s going to shoot less than 40 percent from the field for the year and will have an assist total that places in the lower half of starting NBA point guards.

His efficiency around the basket has plummeted this year down to an atrocious 0.776 points per possession, which ranks in the bottom 6 percent of the league. If that doesn’t improve, what you’ve basically got in Portland is a slightly richer man’s Brandon Jennings.

The second reason I don’t think the Blazers can can contend for a championship is Joel Freeland. Not sure if I have to say more here. Robin Lopez has been great this season, but the Blazers desperately need a competent backup center.

From a gambling standpoint, the line for tomorrow’s home game against the Thunder should be one of the most interesting of the year. Oklahoma City plays tonight in Sacramento, so there should be some adjustment for the road back-to-back. I can’t figure out if the Blazers will be favored in this game or not, but whatever the number is should tell you a lot about how Vegas feels about this team.

Two thoughts on the Pacers:

A. If you’re one of these fans who demand tears and a pound of flesh from your athletes after a brutal loss, if you call into sports-talk radio shows and scream about how you definitely saw Player A smiling after he dropped a touchdown pass or hugging the opponent, and if such shows of affection and sportsmanship clash with your hard-core, PWN-everything way of life, start rooting for the Pacers. The locker room after the game was funereal — Roy Hibbert sat slumped in his chair, staring morosely off into space; Lance Stephenson looked like he had just been given a grapefruit-juice enema; and Orlando Johnson, undeniably the chemist of these Pacers, stared at the floor for the entirety of Paul George’s interview with the gathered press. I know this was the Pacers’ second loss of the season and that they lost in tough fashion, but I worry about burnout down the road. There’s intensity in the NBA and then there’s the theater of intensity. Young teams can sometimes act a bit too intense, almost out of tribute. The Pacers don’t have enough talent and depth to win 65 regular-season games without killing themselves every night. They might do better to tone down the intensity, especially given their lack of depth up front.

B. Paul George is the fourth-best player in the NBA. This is now just obvious. The need for a proper nickname has never been more pressing.

The 6-10 leaders of the Atlantic Division have enough offense to ensure the over in this game.

How are the Nets going to score 80 points in this game, not to mention the 100 or so needed to make the over possible? I’d parlay the Nuggets and the under with the kid who looks like a young Johnny Gill on The Voice.