Maidana vs. Broner: The Unraveling 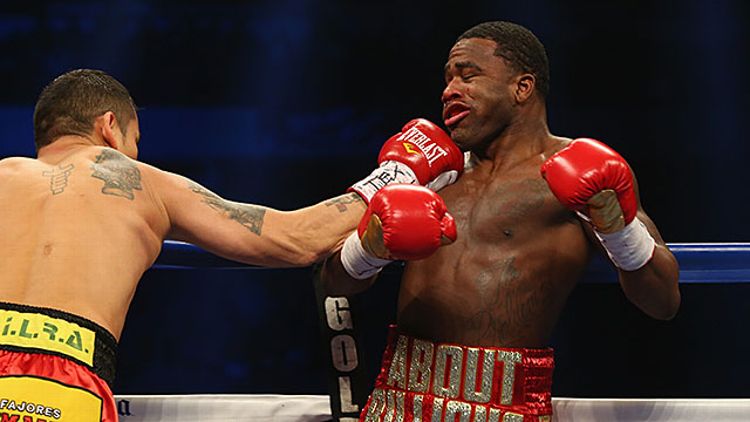 Athletes should not be judged for losing, only for the way they handle losing, which means that on Saturday night in San Antonio, Adrien Broner, the undefeated champion of three weight classes, had some outs. Sure, he was in the middle of getting beat, badly, by a highly motivated man with bad intentions, and nothing Broner was going to do in the ring was going to save him from Marcos Maidana’s fists. But Broner had the power to stop the clowning. He could have sold out in the 11th and engaged Maidana in a “You better kill me now” type of fight. Hell, as Brian Kenny suggested after the fight, Broner could have stopped and talked to the press and explained how he, the self-appointed savior of boxing, got pummeled by a 30-year old journeyman.

Broner did none of that. He chose instead to embarrass boxing and himself with two displays: one vulgar, one farcical. The vulgar came in the first round. Broner had been getting smoked for two minutes and had been set down flat on his ass. Pressed up against the corner turnstile, Broner tied up Maidana’s arms, swung behind him, and began dog-humping him. In the eighth, every Broner fan who nervously laughed off the humping must have vomited a little upon seeing the farce of Broner faking an injury after a head-butt, crumpling to the canvas and praying to God, Al Haymon, and Richard Schaefer that the fight would end with a Maidana disqualification.

I feel the need to say here that I, as a rule, do not like to judge athletes, full stop. In fact, in three years of writing about sports, the only time I’ve felt the need to write about bad athlete behavior was when Broner and Paulie Malignaggi engaged in a stupid and prolonged exchange about who slept with whose “sidepiece.” I also have always felt that boxers should get a longer leash than other athletes — a cornerback who gets baked after talking shit has the next play to make it up. A basketball player who clanks a shot and then pouts about it can wait two days and totally redeem himself. Boxing, because it is an individual sport, and because a loss comes at such a high cost, sometimes sets up a ritual humiliation that will stick with a fighter for the rest of his life. When you’re in the ring alone and getting years taken off your life, you’re not always going to adhere to the Queensberry Rules. Broner’s dog-hump and his flop will not haunt him like “no mas” haunts Roberto Duran or the ear-bite haunted Mike Tyson, but only because Broner is not anywhere near their level, as a fighter or as a household name.

And yet, despite all these caveats, I still cannot excuse Broner’s behavior in the ring and the lack of respect he showed for a sport whose fans bond together under the ridiculous notion that boxing’s traditions and history matter. Fight fans have to endure bad decisions, marginalization, PED scandals, cold wars between promoters, insulting PPVs, and insulting matchups. The only unassailable thing boxing fans have is the conviction that a higher order sometimes reveals itself in the ring. I watch fights every Saturday night in the hopes that I’ll see a scene like the end of this July’s bout between Omar Figueroa Jr. and Nihito Arakawa, when two half-dead fighters hugged one another with true affection. This is absurd, I know, and sounds pious, but boxing is a pious thing tethered to a history of masculinity that is as problematic as it is dumb. I’ll put it this way: To love boxing, you have to be a bit pious about loving boxing.

Broner shat all over our pious belief in those higher moments, and the sad part of it all was that Broner, the fighter, showed more heart Saturday night than any other fighter has this year. He got rocked within the first minute of the first round and held on gamely for the next 11, occasionally turning the tide before getting rocked again. And although he never dropped his hands and went for the knockout, that was dictated by Broner’s limitations as an offensive fighter and not his desire to win. If you believe in Emanuel Steward’s credo that the true champion reveals himself when he’s hurt, Broner, who is only 24 and still has a future in the sport, showed fight fans a side of him that we all must now begrudgingly respect. He stood in, took his beating, and kept punching back. If he had just left it at that, we would all be making excuses for Broner right now. He’s not a 147-pound fighter (neither is Maidana, for what it’s worth), he was brought along too quickly, he spent too much time partying and promoting his brand, etc. All these things might be true, but they don’t really matter anymore because Adrien “The Problem” Broner went from “compelling, talented heel” to “full-out embarrassment” on Saturday night. When Floyd Mayweather played the heel in the past, he always backed it up in the ring and treated the sport with respect. You can like Floyd or you can hate Floyd, but if you love the sweet science, you probably love Floyd. But what do you do with an unproven 24-year-old who gets knocked around the ring and embarrasses everyone in the process?

In the tunnels after the fight, Bernard Hopkins had this to say. Via ESNEWS.

Hopkins, despite his constant bullshittery, is almost always right. Broner’s career must now enter its second phase, and it’s worth wondering whether he will ever fully come back from a beating of that magnitude. Or if his image, which was built up through his manipulation of social media, can ever be restored. If you search “Broner” on Twitter right now, you can see what happens when you build your brand entirely on Twitter’s stupid shit.

Last year, I spent a few days with Broner in his training camp in Colorado Springs. Since then, I’ve rooted pretty openly for him and his trainer, Mike Stafford, to succeed in the sport. Even back then, I didn’t find Broner’s act particularly charming or interesting, but I loved his work ethic, the accuracy of his punches, and the way he thought his way through his fights. I still admire all those things about Broner — bad nights happen in boxing, as do great ones, and I think it’s fair to say that Broner had the worst night of his career and Maidana had his best. But I’ve reached the point where the Adrien Broner act has overwhelmed the merits of the athlete and I cannot think of one athlete who has been able to rebuild after being beat down in such an awful and humiliating way. A great deal of credit should be given to Maidana and his trainer, Robert Garcia, and I’m sorry this piece hasn’t really addressed their brilliance. Maidana whipped himself up into an elevated version of himself on Saturday night — he heard Broner’s talk, stored it away, saw the 5:1 odds against him, stored those away, and when the opening bell rang, he erupted and exposed the Al Haymon/Golden Boy hype machine for what it is. In an earlier era, we might have called him the “virtuous” fighter — he took all the bullshit put out by Broner and the boxing business apparatus, and exposed it all. What a fight by Maidana!

As a bit of a postscript, I’ve been mulling over career options for Broner and have only been able to come up with one: convince Showtime and Golden Boy to make the rematch, ramp up the “antics,” never apologize, and knock Maidana the fuck out. Nothing else works — an apology and a “rededication to boxing” make him just some other dude, and a slow rebuild will take too long, especially if it comes at a lower weight class. Maybe the accelerated, unapologetic return isn’t the best thing for Broner or boxing, but it might be the only out left for a talented young fighter who now finds himself painted into the corner.

About Last Weekend: Charles vs. Everyone