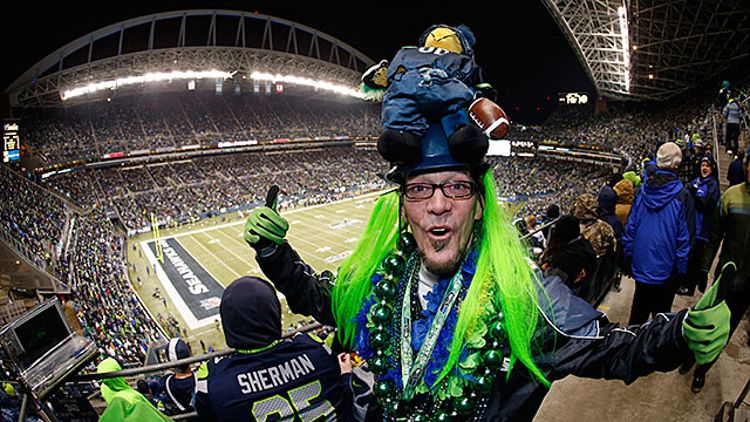 Monday night at CenturyLink Field in Seattle was loud. Really loud. Uncomfortably loud. The loud started as a buzz in warm-ups, became a roar as the game began, and at times reached seismic levels as the Seahawks won their much hyped matchup with the New Orleans Saints, 34-7. After the game, I saw a man in a Guinness World Records blazer holding a plaque certifying exactly how loud it was. Officially, no game had ever been louder. I wasn’t surprised.

That said, it was not the noise that determined the outcome. Drew Brees and the Saints did not seem particularly flustered by the crowd, and while the game featured a number of flags, few were for procedural violations. Aside from a 20-yard completion to Jimmy Graham, on the Saints’ only touchdown drive, Brees was unable to pick apart a makeshift Seattle secondary and forced to try to move the ball with underneath passes. This strategy failed. The rigor and precision the Seahawks displayed on defense Monday night likely secured the team’s home-field advantage through the playoffs.

I can’t remember exactly when my mind collapsed under the weight of trying to understand what I was seeing. It wasn’t the early 60-yard pass to Zach Miller, where Wilson used his eyes to create more than 10 yards of separation for his tight end. Maybe it was the deep ball lofted to Doug Baldwin, in the face of an all-out blitz? Or the lob across his body later in the same drive to Baldwin for a touchdown? Or the ball Kearse dropped in the end zone that was placed so impeccably as to break one’s heart when it hit the ground. Or the back shoulder pass to Kearse. Or maybe the deep ball to Lockette. Or maybe on one of the read option runs. Or possibly the desperation lateral straight out of a Pop Warner playbook that was inches away from working. It had definitely already happened before Wilson banked a touchdown pass off tight end Kellen Davis’s face and into Derrick Coleman’s hands.

I don’t know. At some point in the second or third quarter, I descended into madness. Russell Wilson broke my brain.

Watching Wilson live, consistently exploiting whatever the defense gives him, whether it’s running room or single coverage, is astonishing. How can a second-year quarterback drafted in the third round keep putting together single-game highlight reels comparable to other players’ entire seasons? The combination of decision making, foot speed, and arm strength begs absurd comparisons like Fran Tarkenton and Steve Young. These are obviously absurd comparisons! You can’t compare Russell Wilson to Fran Tarkenton and Steve Young. How could Russell Wilson be that good?

But then you look at Wilson’s stats and see that only Dan Marino threw for more touchdowns through this point in his career. That no player will have won as many games in their first two seasons as Wilson. Wilson is ahead of Peyton Manning in YPA on the season. In the history of the NFL, only Aaron Rodgers has a higher passer rating. Wilson is the lowest-paid starting quarterback in the league, which allowed the team to go sign Cliff Avril and Michael Bennett in the offseason, both of whom combined to strip Drew Brees and return the fumble for an early touchdown. He also did all of the special effects for The Hobbit: The Desolation of Smaug, using only his mind and Microsoft Paint. Oh, and he banked a touchdown pass OFF HIS TIGHT END’S FACE.

Again, my brain is broken.

To fully contextualize what the Seattle Seahawks did at CenturyLink Field on Monday night, I think it is worth remembering that, like John Wooden, Ron Swanson, and the pharaohs, Seahawks head coach Pete Carroll built his own pyramid. The Win Forever Pyramid. Here it is:

I cannot imagine having the self-confidence necessary to unironically codify a belief system in pyramid form. It’s just so silly. And then Carroll takes the next step and names it the Win Forever Pyramid, as if that’s a reasonable name for anything, as if an unnatural yearning for perpetual victory hasn’t always been a prerequisite for constructing any type of pyramid at any point in history.

But then, to see Pete Carroll in all of his swaggering, energetic glory is to have no doubt that the pyramid is working. Carroll is the second-oldest head coach in the NFL after Tom Coughlin, a year older than the perpetually exhausted Mike Shanahan, and yet he’s leading the league’s most dynamic team to the top seed in the NFC with an eye toward the creation of a perpetual dynasty. With Pete Carroll at the helm, nothing makes sense, except for everything.

As a Seahawks fan, however, I have to say that remains an absurd notion. No matter how good the team looks, there is no knowing. As every Seahawks fan has been reminded, we’ve never won before. Looking at Pete’s pyramid, we haven’t practiced winning; the environment we have as fans is not yet one built on confidence and trust. Things are still anxious. We don’t know how to win, much less how to assume we will win. All of which is to say I’m not surprised the stadium has never been louder than it was Monday night. When faced with not knowing, there are really only two options: Be anxious or get loud. This fan base has been anxious before. It’s complained about poor refereeing. It’s turned on its worst players. So why not give the Win Forever Pyramid a chance?