The Americans Season 1, Episode 12: Feelings Come and Go, But ‘The Oath’ Is Forever 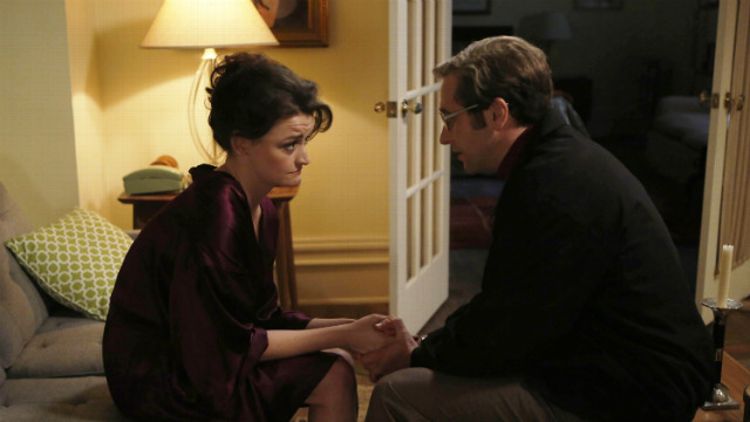 One of the many subtle arguments The Americans has advanced during this remarkable debut season is the notion anyone is capable of doing just about anything. Maybe we can’t all get an armed FBI agent to stab himself in the gut, like Philip, or spice up foreplay with a metal towel rack to the head, like Elizabeth, or even catch grapes in our mouth like Paige. But those are just details. In terms of the juicy stuff that spies do on the reg, the lies and double-crosses, the violence and deception? Yeah. Just about anybody can manage that. You’d be surprised.

The reason isn’t ideology and it isn’t patriotism. It’s not some dark or resourceful second self that lurks within each of us, Mr. Hyde–like, waiting for the right moment to emerge. Our capacity for doing dirt, The Americans argues, is directly connected to our proximity to other people. “Love,” as a great American once put it, “is a battlefield.” And the fighting, as worst-mom-of-the-year candidate Elizabeth counsels her daughter, never stops. (“Feelings come and go, honey,” she told Paige while at the sink. “It doesn’t mean the battle is lost.” C’mon, Nadezhda! That’s a soldier’s mentality guaranteed to land you an officer but never, ever a gentleman.) Love — and its double agent, fear — is what made Stan put a bullet into the back of an innocent kid’s brain, what made Viola put a ticking clock in her boss’s office, and what made Martha betray first her practicality and then her country. When pushes turned to shoves, even little Henry went full Streets of Rage and broke a bottle over a creeper’s skull the moment he felt his sister was in danger — and Henry weighs less than the piece of paper Arkady made Nina read aloud to him. The brilliance of The Americans is the way it demonstrates no war is ever really cold. People are far too hot-blooded for that.

“The Oath” was a typically excellent episode of The Americans, which means it featured a lot of lying: Stan to Nina, Elizabeth to Philip, and, most devastatingly, Clark to Martha. But what made it particularly dark was the way it hovered over the bigger, structural lies that society creates in order to police itself. It was there in the grandiose pledge of allegiance Nina was forced to recite in order to secure her (awfully sudden) promotion. She sounded good — and Annet Mahendru always sounds good. As an actor she’s an alluring mix of heat and chill; sometimes she’s the vodka, other times she’s the ice — as she swore to serve as “the sharp edge of the struggle” for the interests of her people. But let’s drop the fignya, shall we? The only struggle that’s ever interested Nina is her own. It’s why she was sending stereo equipment home in the first place, why she went down on Vasili, and why she buttered up to Stan. When, at episode’s end, she spilled the beans like tea leaves and diamonds all over the Rezident’s desk, it wasn’t because a piece of paper had stirred a latent sense of duty. It’s because she finally realized that she was being lied to, that the man she was pretending to love had killed a man who had actually loved her. The personal always trumps the political; sometimes it’s just convenient to claim otherwise.

Nina’s oath of office was artfully twinned with the sham marriage of Clark Herbert Westerfeld, who doesn’t exist, and Martha Anne Hanson, who really should know better. Here again was a set of words, a solemn ceremony that we imbue with a significance far greater than the sum of its parts. “An oath is both a statement for the present and a promise to the future,” intoned the reverend. But the couples who stand in front of him have already lashed themselves together with emotional rope far stronger than anything God or the state of Virginia could ever muster. “I know they’re just words people say,” Elizabeth said afterward to her former/current/never husband. “Do you think things would have been different between us if we would have said them?” Philip demurred and director John Dahl framed the scene perfectly: At a distance Philip appeared to be leaving Elizabeth at the altar. But in reality all that mattered was that he was walking away.

Let’s talk more about this wedding. What sick sadist dreamed up such a scenario? A decade of cable excellence has taught us to expect certain things from a season’s second-to-last episode, first and foremost among them an opportunity for scribblers like me to use the word “penultimate” with the wild abandon of a New York City chef with his first ramps of the year. But beyond that, penultimate episodes are often when the big violence goes down, like that thing on The Wire or that other thing on Game of Thrones. Last night, spymasters Joe Weisberg and Joel Fields gave us the inverse: a marriage ceremony more brutal than any whacking, a cynical charade that was often almost sweet. Forcing Elizabeth to stand there, in her lousy glasses (a Westerfeld family tradition), and watch her husband marry someone who adored him, with vicious Claudia present as her only family? The whole setup was far worse than any torture she could have endured back in the mole-hunting warehouse days.

And what of Martha? There’s always a quiet, heartbreaking dignity to the catfished, even those from an era that predates the term. It’s because we can see their desire to believe so plainly, a cringe-inducing fervor that silences all doubt. Martha has “dated nothing but unpredictable” for decades. She loves Clark not necessarily because of who he is — because, let’s face it, he is literally nobody — but because of what he represents. After all this time, the bad lovers and worse workplace harassment, he feels she deserves him. He’s someone to make breakfast for and introduce to her parents. He fills a need. He plays a role. Alison Wright has been quietly wonderful in this part from the beginning, adding just the right notes of enthusiasm and spark to a character that could, in lesser hands, be a doormat. But that doesn’t mitigate the cruelty that’s being visited upon her. Maybe it’s distance provided by that unmussable wig or maybe it’s the strength of all that misdirected anger, but what Philip is doing to this woman is horrific, the most monstrous act in a series full of them. The escalation of this fake affair into a fraud marriage is worse than all the kicking, punching, stabbing, and shooting we’ve seen so far. He’s destroying another person from the inside out. It’s easy to lose track of that because Philip is such a good dad and generally a softer touch than his brittle wife. But to toy with a worthy woman’s wants and needs until he owns them both is an act worthy of the devil.

Which, if you recall, is exactly what Viola called Philip last time she saw him, back when he was wearing a porn ’stache and smothering her sick son with a throw pillow. It wasn’t surprising that the Weinberger business from the second episode returned last night, but it was gratifying. At the start of the season it seemed that The Americans would follow FX protocol and mix in a few stand-alone procedural episodes with the overarching mythology. But Weisberg and Fields were both devious and brilliant: everything was always connected, each op a breadcrumb in a season-long trail of deception and deceit. Back when I was a fresh-faced English major I used to think the word “dissemble” shared some sort of etymology with “disassemble.” It doesn’t and I failed that particular pop quiz. But I couldn’t help but think of it last night as Weisberg and Fields (and the episode’s credited writers, Joshua Brand and Melissa James Gibson) slowly sifted through the detritus of the season and reassembled all the hours of malicious dissembling. “We see what we see in people,” Elizabeth optimistically told Paige. “Things that aren’t really there.” But Viola saw right through her son’s captors, and her conscience — and the oath she took to her Lord — finally led her into Gaad’s office.

“The Oath” was an hour defined by two confessions: Viola’s and Nina’s. But why does everything feel dirtier than ever? Elizabeth’s asset is promising her high-level intel but can’t even stay out of jail long enough to deliver the goods. The FBI knows the KGB is listening to whatever they say in Caspar Weinberger’s study, but not what they say in Agent Gaad’s office. I suppose the episode’s best scene — the charged game of Joust between Elizabeth and Claudia at the local arcade — was also an apt metaphor for where The Americans stands as we head toward zero hour: Games on top of games on top of games. Everyone is playing everyone else as quickly and recklessly as they can. But the thing about those old arcade machines is that it didn’t really matter how good you were or how many quarters you had in your pocket to burn: There weren’t happy endings or really any kind of endings at all. The thing about games back in 1981 is that, no matter what, everyone eventually lost.

Started From the Bottom, Now He's the Rock ... and Other Inspirational Tales From This Week's Tabloids