Songs of the Week: Skylar Spence, Vampire Weekend’s Chris Baio, and the Return of Chillwave 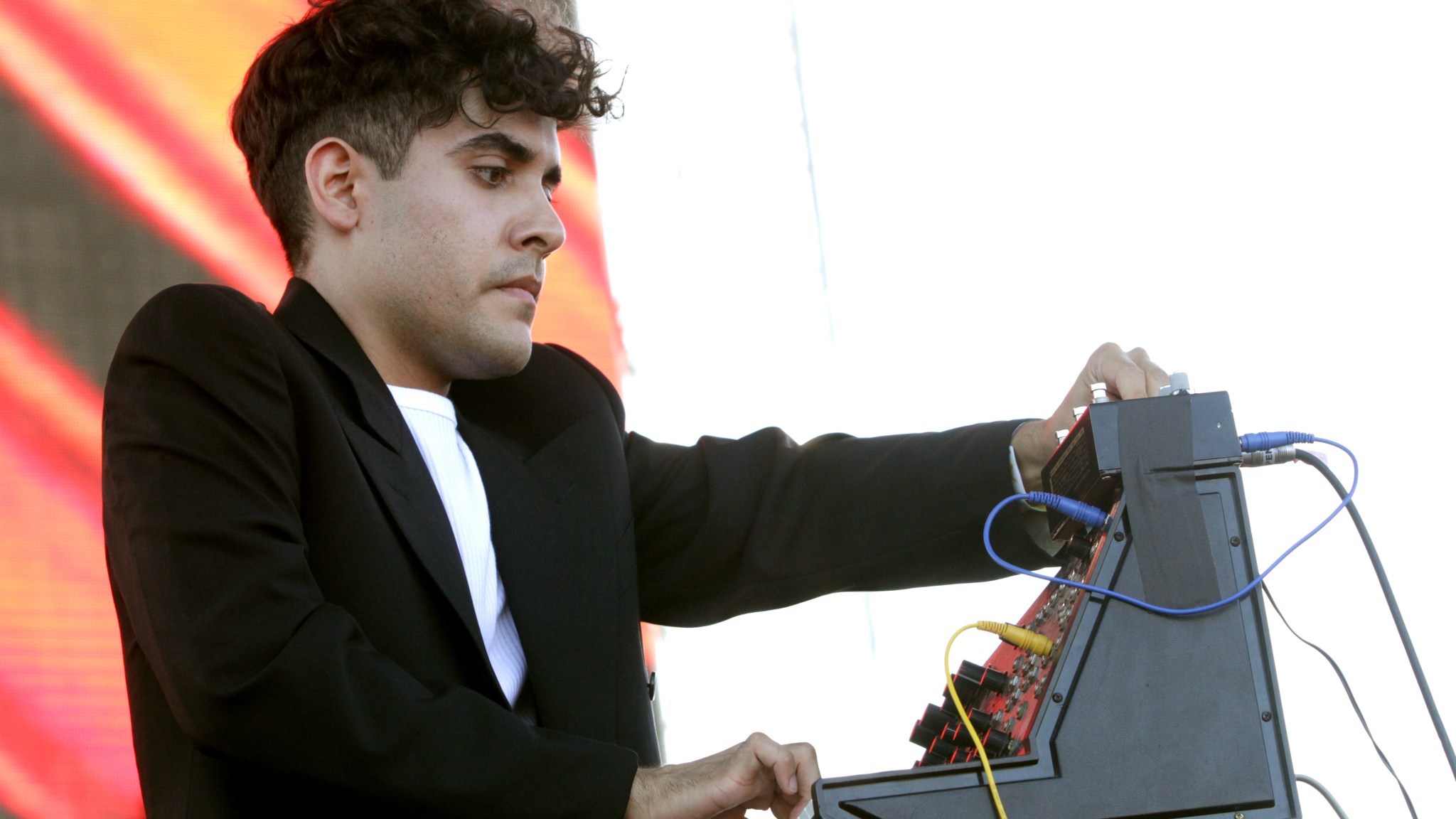 I’ve had some rough things to say about Neon Indian and his role in the chillwave explosion of 2009. Specifically, I pointed out that his lyrics are mostly inane nonsense and his vocal talents leave something to be desired when experienced live. Here’s the problem with those statements: I mostly like Alan Palomo’s music. No, really. This is not a goof. The last album, Era Extraña, has suffered in my estimation every year since it came out, but I still go back to Psychic Chasms, even if I find its deadbeat summers and unfulfilled acid meet-ups unintentionally hilarious. Era Extraña is heavy, lead-footed, and kind of dark in places; songs like “Fallout,” “Hex Girlfriend,” and “Future Sick” are as bummer-inducing as their titles imply. At his best, Palomo makes cocaine music, the kind of songs you want to hear when your mind is consumed only with thoughts of pleasure and how to receive it. The music is so catchy that it barely matters what is being sung or who is doing the singing. The sentiment is more vital than the message itself. Neon Indian soars when Palomo leans more fully into his love of ’80s iconography.

His follow-up to Era Extraña drops next month, and VEGA Intl. Night School is pure, uncut cocaine music. “Slumlord” is great, but it’s not even the coke-iest track on the record. I save that distinction for “Dear Skorpio Magazine,” a raucous, leering ode to cheeseball ’80s Italian porn mag Skorpio. Chillwave was about sideways glances to the past, but as these artists mature out of the trend, they’re turning to face their influences head-on. Toro y Moi embraced jangly indie pop, Washed Out doubled down on hippie-ish nature fetishes, and Neon Indian has finally accepted that he’s a sleazy purveyor of disco coke jams.

Genres don’t really die so much as they mutate into other forms. Punk branched off into hardcore and New Wave. New Wave begat No Wave, which eventually turned into grunge through Sonic Youth. In chillwave’s case, the analog nostalgia was reprocessed into super-esoteric micro-genres like seapunk and vaporwave. Saint Pepsi, now known as Skylar Spence, was first noticed for dabbling in vaporwave, which defined itself by a fascination with subversion of ’80s and ’90s dance music and satirical deconstructions of consumer culture. Where chillwave classic “Feel It All Around” by Washed Out slowed down a frantic Italian dance tune1 and turned it into a meditative electronic moonbeam, vaporwave slowed down samples so much that the songs became brooding, lonely, and menacing — or in some cases, so silly sounding that they reveal the inherently ephemeral nature of pop music.

Saint Pepsi released a split record with fellow vaporwaver Luxury Elite called Late Night Delight. The album opens with a terrifying sample of “Rock With You” by Michael Jackson and ends with a dreamy take on “Off the Wall” called “Enjoy Yourself.” Late Night Delight, and vaporwave in general, is the hangover from the coke music binge — a dark reflection of a frivolous style. It’s what happens when the world stops spinning around you and you’re forced to come to terms with whatever self-absorbed nonsense you got into the night before. The music works much better when accompanied by soulless advertising imagery that visualizes that sensation of wanting to have it all for no good reason. “Enjoy Yourself” is especially freaky when paired with chopped-up bits from the infamous McDonald’s “Mac Tonight” ads that featured a man with a crescent moon for a head playing the piano on a bed of clouds.

Saint Pepsi was forced to become Skylar Spence because, as you would imagine, Pepsi doesn’t want some hipster selling T-shirts with its name on it. The name change might have been legally motivated, but it makes artistic sense as well. Where Saint Pepsi would release something as transgressive and borderline unpleasant as Late Night Delight, Skylar Spence wants to actually make you dance. Prom King, his debut full-length, dropped today. It also plays with the disco-revivalist themes that Neon Indian claims on VEGA Intl. Night School. “Fiona Coyne” is the standout track, an ode to a Degrassi character that is miles away from scary moonmen and creepy samples. Vaporwave never quite caught on the way chillwave did, but you can see traces of its satirical ambition in the output of the PC Music collective. The miracle of musical evolution goes on and on.

I hate Vampire Weekend. Its rise ran parallel to the chillwave fad, and I thought of it as music for dorks who would rather sit in a corner reading Goodbye, Columbus than go out and party. Listening to its music is like getting slapped in the face with a Sperry Top-Sider by Chris Eigeman. And this is coming from someone who likes both Sperrys and Chris Eigeman. It’s just an East Coast preppy thing I will never actually understand, I guess. Maybe I’m a self-hating preppy who wishes he weren’t such a square. Regardless, this side project from Vampy Weeks’s bassist Chris Baio doesn’t bother me at all, probably because the songs sound nothing like Vampire Weekend. Baio has a bit of a lounge-lizard-y, Bryan Ferry thing going on in “Sister of Pearl”2 that I find quite charming. The rest of the album leans on electronics and instrumentals. In a way, it owes more to Neon Indian than it does to Vampire Weekend. It’s not quite bass-heavy EDM. It’s yet more ’80s-inspired club music, with a mild nod here and there to Depeche Mode.

Check out Steven Hyden’s Q&A with Bradford Cox ASAP. As much as I loved Deerhunter’s last single, “Snakeskin,” for its funky qualities, I’m equally intrigued by the dream-pop vibe on “Breaker.” With two such disparate releases, I have no idea what to expect from Fading Frontier when it drops, but I’m sure I’ll love every second of it.

I’m throwing this on here because I haven’t enjoyed a late-night talk show theme this much since the old Late Night With Conan O’Brien theme. Combined with the visuals, it almost feels like a daytime talk show opening because it’s so upbeat. Like the host for whom it was made, this intro is not trying to be cool or sly. It’s unabashedly optimistic, welcoming, and full of joy.

Molly Lambert reviewed Honeymoon, the new Lana Del Rey album, today, and while I have no patience for LDR, I did find myself intrigued by Molly’s name-checking of ABBA as an influence on Honeymoon. Like a lot of music fans, I have a soft spot for the kitschy quirks of ABBA. “Fernando” is one of my favorite ABBA tracks because Steve Coogan’s obnoxious radio host character Alan Partridge named his son Fernando after the song.

It’s not just chillwave that’s primed for a comeback. The unimaginatively titled “dance punk” genre is perpetually threatening to reemerge. Club music made the jump to hyperspace and abandoned grit, grime, guitars, and DFA Records–approved artists. But there are enough people like me who yearn for the days when dance tracks could be snotty or angry or petulant instead of unifying and egalitarian. !!!’s upcoming album, As If, aims to fill that void in my life. I saw the band open for Hot Chip at the Greek Theatre here in L.A., and it remains a lively, anarchic presence onstage. That I felt only slightly embarrassed for the band members as they age up was a minor victory. They’re not quite Happy Mondays, a dance act that can barely muster the energy to fight each other, let alone gyrate. It’s inevitable that they will be one day, but not yet. Not now.