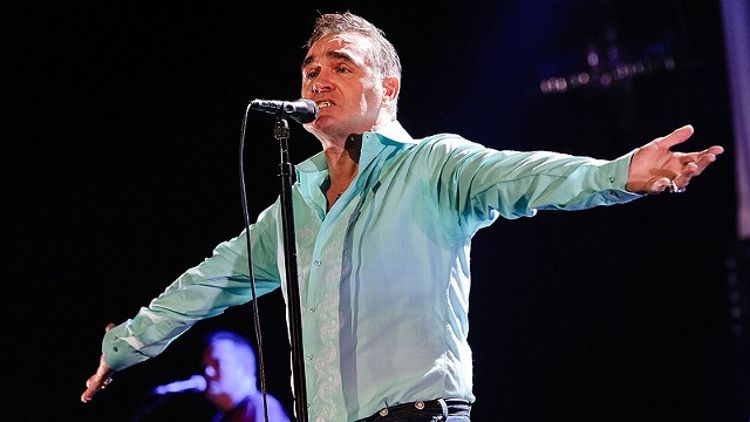 A window directly into my soul, or the first time I was exposed to the Smiths: I was walking down the hallway in middle school when I saw an older student — the star of various sports teams, a boy who combed his hair and had a steady girlfriend — open his locker. Curious about his inner life, I peered in: It was empty. The inside of the door was plastered with stickers boldly proclaiming something called “THE SMITHS.” He exchanged a word with a friend and then put a record inside his locker. The record also had these two words on it. I assumed that The Smiths were the heaviest, manliest, most aggressive band on the planet. It would be another year or so before I would discover this wasn’t the case, after a friend who’d been spurned by a girl in our class insisted that he didn’t want to talk about it, and the only thing he needed, he dramatically declared, was this tape of The Smiths’ greatest hits. I took this to mean that the tape of undoubtedly unholy, pure noise he was putting in the stereo would eviscerate us, cleanse us of whatever it was we were feeling. But instead, I heard Johnny Marr’s jangly guitars and Morrissey’s fey warble, words that depicted a grave, mature-seeming sadness far beyond our preteen comprehension. These songs didn’t describe my friend’s specific malaise (she wasn’t all that) so much as they offered a new language he was trying to stretch and fit inside.

To see Morrissey in 2012 is to seek communion with the like-minded and, perhaps, a prior version of oneself. The stubborn and, if you want to be polite about it, famously “principle-driven” singer is in the midst of a world tour and, at this point in the 53-year-old singer’s career, you imagine there are few attendees with unresolved feelings about the former Smiths front man’s solo career. When Morrissey and his muscular backing band played Radio City Music Hall last week, it had the feeling of a reenactment. There were T-shirts from all stages of his career, graying quiffs, a pre-show video playlist featuring all the Morrissey favorites (New York Dolls, Sparks, etc.) familiar to Morrissey devotees, and he even took the stage to “Imperfect List,” as he’d done for previous tours. There were Smiths songs (“Shoplifters of the World Unite,” “Still Ill”) interspersed among old favorites (“Everyday Is Like Sunday,” “Spring-Heeled Jim”), there were sing-alongs when appropriate, there was the moment he took off his shirt, there was the mid-show lull of “Meat Is Murder” (with accompanying propaganda film for the vegetarian lifestyle), and there was that spell of chaos during the encore when fans took turns trying to shake-and-bake past security and hug their beloved.

The music was fine, perhaps thicker and more conventionally “rocking” than in days past, and it was startling to see so many generations of Morrissey devotees who had grown into functional, socialized adults. Morrissey remains stubborn and judgmental, which is reassuring in the way things that never change can offer reassurance. Are there people left for whom “Meat Is Murder” might still be transformative? It was Morrissey’s sense of solitary withdrawal that had once captured the imagination of his followers. The disappointment at the heart of his songs wasn’t born out of pure despair so much as a demand for more out of life, love, the people around him. There was something needling and subversive about his contrarian sensibility, his willingness to despise the popularity so many others sought.

At some embarrassingly late point in life, I began to recognize that I hadn’t fully understood Morrissey’s bleakness. You could take everything literally and discover comfort in someone else’s acerbic, lonely narrations. Or you could listen for those droll punchlines and knowing exaggerations and realize that Morrissey was just having a laugh. He paced the stage of Radio City and began to tell a joke about a cab driver. It went nowhere, but he seemed amused all the same. As the years have passed, with Morrissey barely mellowing, his iconoclasm has made him seem somewhat hermit-like, but maybe this is what happens when you are adored for being a misanthrope. Morrissey is currently preparing a 660-page autobiography he hopes will be “an instant Penguin Classic.” Then again, he also told an interviewer last year that he wasn’t “that interesting.” The book is due for release in December, and I expect it to be fucking hilarious.