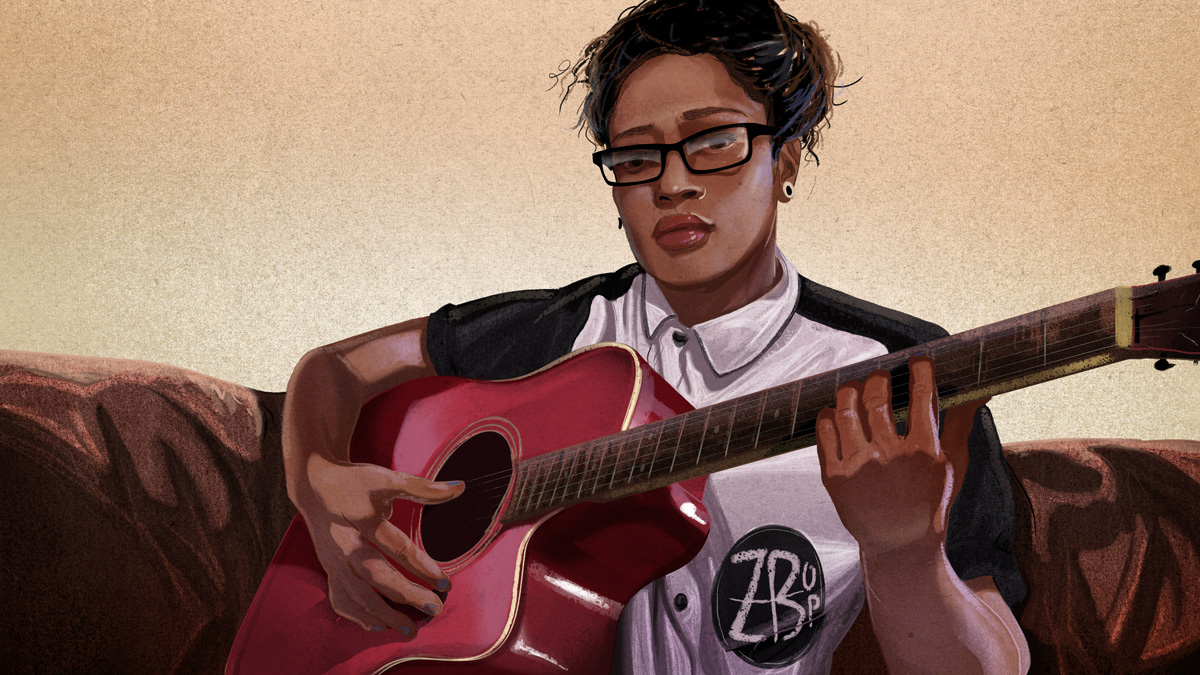 Increasingly, I find myself processing each passing year not as a string of events but as a series of shifting moods. Instead of discrete milestones, I recall sensations: an intense rush of ecstasy, late-afternoon shock, a week of fatigue, a season of contented bliss. This year, the moods I remember with an unusual fondness — the ones that offered a reprieve from the rest of life, on and offline — were brought on by strangers playing music on the Internet.1

I spent a remarkable amount of time in 2014 digging though YouTube to seek out covers of songs I knew and loved, whether by Drake or obscure Glaswegian crash-pop bands. I collected these clips as I collect and obsess over records from distant cities I will never visit. I’d like to say I was driven by a curiosity about the lives of others, but that’s not quite right. Other than looking at what other videos they’d posted, I never learned anything about who they were or where they lived; I never scrutinized what they were wearing, the books on their shelves, or the color of their carpet. But I felt like I recognized something in their performances. It was in the way they leaned into certain words, the melodic gloss that wasn’t in the original songs’ versions, the way they twisted someone else’s plaintive lines into something strange and desperate. They were making these songs their own.

Earlier this year, while looking on YouTube for a live clip of Slowdive’s “Alison,” I noticed a cover version by a user named fooberdoobs in the sidebar. I had always assumed that the song’s production was complex and laborious, and I didn’t think a lone person with an acoustic guitar could reproduce its majesty. The original is the perfect distillation of shoegaze, a haunting melody swaddled within layers of golden gauze. Interpreted by fooberdoobs, the song is slower and more deliberate. The heavy reverb fills the room with noise; it swells with a kind of sad euphoria. The sidebar recommended a different and no less singular cover version by a user named AgeKeey. AgeKeey took a much more strident approach, unearthing a choppy aggression that had been tamed in the original. Soon I was just searching out random songs I remembered from middle school, ones I never imagined anyone would have bothered to cover. Two girls reading the lyrics of “Sally Cinnamon” off an iPhone. Two guys — presumably Russian? — doing the Verve’s “Slide Away.” One of them earnestly strums while the other builds walls of sound to match his trippy shades.

Cover versions are about living with music. They’re about letting a song daze and entrance you, studying its surfaces and running your finger along its edges and angles, taking it apart and putting it back together again until the only thing left to do is to reshape it in your own image. You trace its highs and follow its lows and figure out the center so you might figure out a part of yourself. There’s something strange and voyeuristic about watching strangers on a screen do this. These aren’t the kinds of performances that aspire toward stardom; it’s unlikely that these clips will land anyone a spot on tour with a pop star. More often than not, they communicate a kind of intimacy and generosity, a gift that asks nothing in return but an ephemeral moment of communion. Maybe someone in that vast, unknowable audience will like it enough to share it with someone else.2

These covers remind us of all the new possibilities tucked within old songs. Pavement’s lyrics make even less sense when someone sings rather than speaks them, and Spiritualized’s “Ladies and Gentlemen We Are Floating in Space” never sounded so sweet and desperate as it does shorn of its epic frame, sung through a rolled-up magazine. Sometimes the performers seem too shy to look at the camera; sometimes it looks like they’re purposely pointing their music somewhere else in the room. A kid discovering something faintly jazzy about Animal Collective’s “Fireworks.” A Spanish guy having a blast assembling a one-man-band version of Inner City’s “Good Life,” a song intended for dance floor fellowship. At a time when living on the Internet has the capacity to feel dispiriting and casually abusive, these clips feel like the very opposite of trolling. They create scattered micro-communities of encouraging fans wishing each other well. A Japanese kid plumbing the droll flatness of the Vaselines’ “Jesus Wants Me For a Sunbeam” and then commiserating in the comments section with a new fan from China about how nobody else around here listens to cool music. In case you ever wanted to hear an acoustic version of Rich Gang’s “Lifestyle” by two kids in Reno, that exists too.

I couldn’t stop listening to a user named Alofa Gould interpret PartyNextDoor’s “Persian Rugs” via King Krule’s “Baby Blue.” It becomes a thing of majestic, shaky beauty. (Gould also records as Ikea-Graveyard.) My favorite clips were by a user named Brenna Thomas, who also turned to PartyNextDoor for inspiration. She transforms his shapeless, cocky “West District” into something off-kilter and bluesy. “Yeah my name is NazT and the trigger finger function,” she smiles, adapting the line to her name. “Silly n-​-​-​-​ might lose his life on assumptions,” she continues singing, and it sounds like a realer threat than the slick, cavernous original. Halfway through, it dissolves into Drake’s “Days in the East.” On the original, Drake is all squint-eye come-hither, sensitive sext croons over synth kicks and a swarm of underwater bees. She turns it into something entirely different, adding a bit of sneering menace that feels feigned in the original. Drake balls up his fists and looks out a penthouse window; she looks straight through you, and she feels sorry for you.

Allan Kingdom and Spooky Black’s3 blissed-out “Wavey” was one of these Tumblr micro-hits that attested to what was now possible so long as you had some ideas and software. It felt like a massive, blockbuster hit turned inside out. When Thomas covered it, she stripped it bare, erasing Kingdom’s falsetto and upping Spooky Black’s faux-machismo. Whereas the original sounded tentative and prankish, her cover took everything for face value, turning it into something teasing and strong.

I realize that all of this is one step removed from saying: “YO. PODCASTS!” Normal people doing normal things on the Internet isn’t a particularly new phenomenon, but it was one I kept returning to over the course of a year in which history seemed to alternate between moving too fast and too slow. Maybe this is just what happens when you live a life in search of distraction and diversion. Maybe it just speaks to the amount of time I spent on the Internet, a version of the world calibrated to intensities, where everything that matters is either the best or the worst thing ever — where things are ranked and raked over until they are drained of meaning. To me, these videos had more modest aspirations, each one a message in a bottle. They chronicled everyday moments of discovery and faith. At a time when anyone with a decent computer and a vision can make music that sounds big and polished, a lot of stuff on YouTube remains bare and unadorned, and maybe that’s why I was drawn to its smaller scale. Nothing has to sound this way anymore.

It could be that I’m idealizing what’s going on here, trying to call people singing songs on YouTube some kind of outsider art. Maybe everyone secretly wishes to become a star; maybe this was as much a version of someone else’s “reality” as reality TV. All I know for certain is that this was some of the best music I heard all year, music that reminded me of bygone thrills: accidental discovery, browsing, the lure of imperfection, the smallness of a stage. At a time when anything on the Internet could spark controversy or court abuse, it was vital to escape into someone else’s world for a few minutes at a time. It was quietly inspiring to see people send each other long-distance props and ask for guitar tablature.

On Facebook, a friend of a friend kept posting images of James Foley’s beheading; it was her way of forcing everyone to reckon with true evil. Lying in bed, needing to sleep, unable to stop watching a livestream from the streets of Ferguson. The trauma of being trolled. Fireworks from the perspective of a drone. The what-time-is-it-there disorientation of seeing familiar blocks of Taiwan and Hong Kong occupied by cheery idealists. A grainy clip of a man paying an unjust penalty for selling loosies. A web-savvy terrorist organization capitalizing on how the Internet works. A web-savvy president riffing between two potted plants. And then you read about all that you don’t see, and you feel worse. In many ways, searching for these covers was a retreat from everything else — not an escape, but a pause from the unrelenting rhythms of life and politics, a diversion from the bad and a chance to recall the good. And in this way, I found comfort in all of these modest offerings. A song for your thoughts.

Filed Under: What we saw, Year in Review, The Year In Music, Youtube, covers