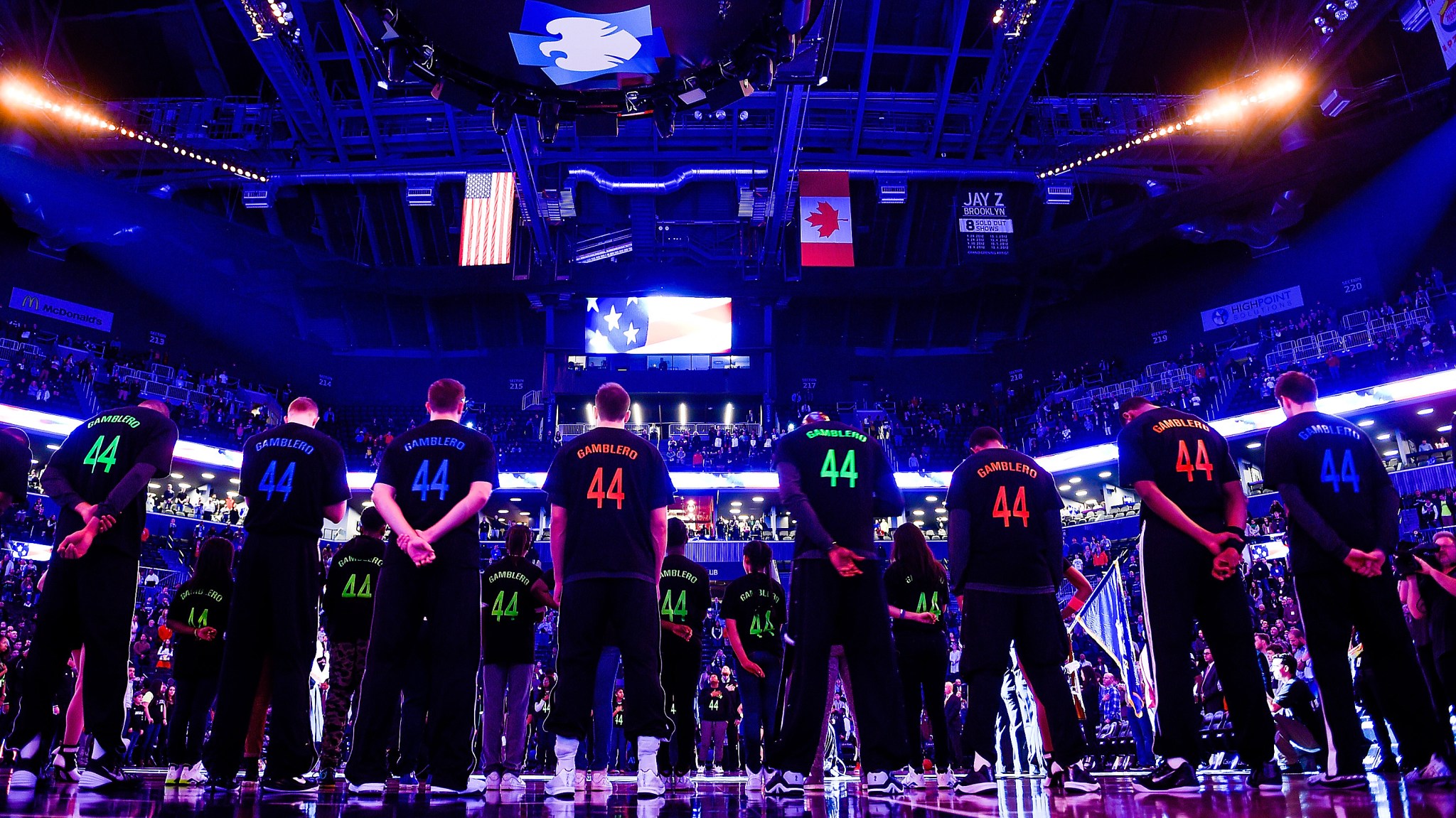 As the Nets came out for warm-ups before Tuesday night’s game against the Heat, I heard a kid ask his mother why everyone on the team was wearing the same number. It wasn’t just the players. The cheerleaders, dancers, assorted hype squads, and scattered team employees were all wearing black T-shirts emblazoned with “Gamblero” and “44” in various shades of neon. Dozens of fans around the lower bowl wore neon shirts underneath their Nets jerseys and goofy glasses to match. Deron Williams sported a pair of eye-catching high-tops the color of a fresh tennis ball.

I didn’t hear how the mother answered her son’s question, nor did I envy her task. They were all paying tribute to Jeffrey “Gamblero” Vanchiro, one of the Nets’ most visible fans, who took his own life over the weekend. If you’ve ever been to a game at the Barclays Center, you’ve no doubt seen him, and even if you haven’t, there’s a character like him at every arena. During timeouts, the giant video screen often showed Vanchiro jamming in the aisles, strutting, raising the roof, mugging for the camera. He was distinguishable because of his loud style of dress: neon undershirt, no. 44 jersey, glasses and cap to match. He always looked stoked as fuck to be dancing and hyping everyone up and then, as soon as the timeout ended, he would settle into a seat, clap his hands, and cheer on the Nets.

His passing gave the night a solemn vibe. Before tipoff, the team played a video tribute to Vanchiro — “as known for his enthusiasm as his neon shirts” — before a brief moment of silence. Shorn of LeBron James, Paul Pierce, and any general feelings of optimism, this matchup was a far cry from last year’s home opener. The Nets continue to age before our eyes and, despite some flashes from Williams and a career night for Mason Plumlee, the team’s improving defense couldn’t make up for its static offense. (For the record: The Nets’ promising young Croatian forward Bojan Bogdanovic currently wears no. 44.) 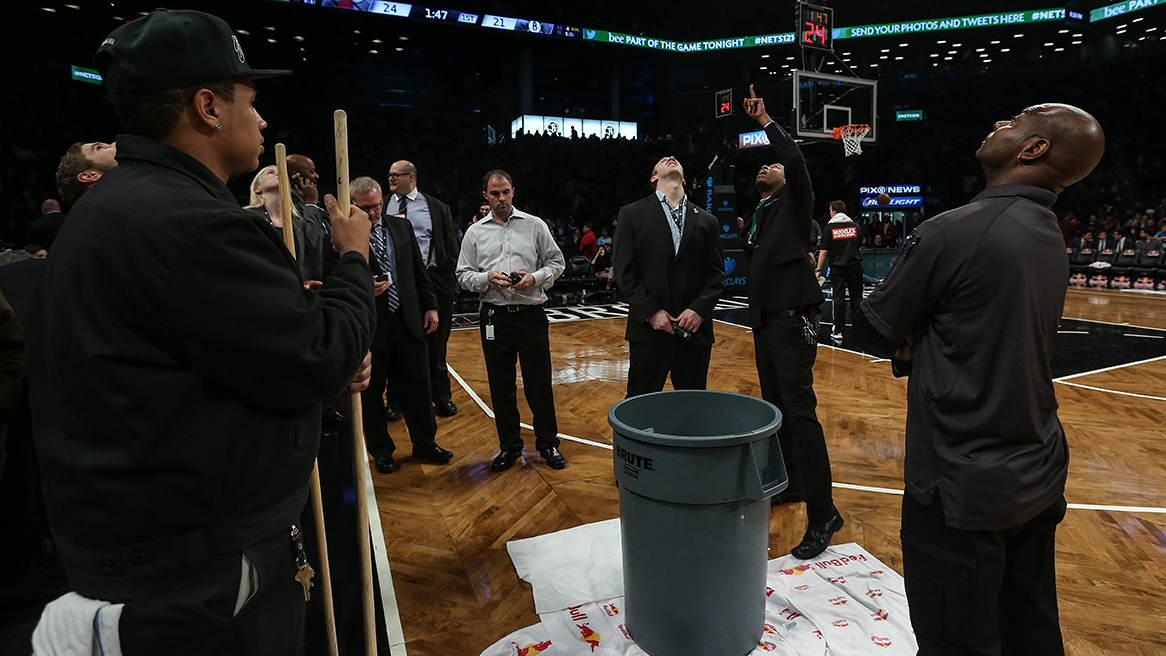 Late in the first quarter, the Barclays Center roof sprung a leak, halting play for about half an hour. In an effort to entertain us, the Dance Cam patrolled the crowd, trying in vain to find a new “Gamblero.” An older white lady wearing a pink neon shirt underneath her Nets jersey hammed it up during “Don’t Stop ’Til You Get Enough,” and a new star was born.

I’ve gone to a lot of Nets games, more out of curiosity and geographical proximity than from any feelings of true devotion. Jeffrey “Gamblero” Vanchiro was one of the constants. Everyone who came to games with me noticed him. We wondered what his story was. I eventually started following his “Lofty Goals” column for Frank151. I read a few stories about his past life as a graffiti writer — as part of Queens’s Smart Crew — and then as a professional gambler. He was eventually profiled by the Times. It was cool to think about where life had taken him, the different versions of New York he had known over the decades. Once, he was strictly underground, the type of kid who was always running from the cops, thumbing his nose at all forms of authority. Now, he was the living embodiment of a kind of low-stakes, cheery patriotism, just trying to amuse us one timeout at a time.

To me, authenticity is one of those words that makes sense only in terms of its absence — it is far easier to recognize when things are fake or inauthentic than to describe what we actually mean we praise something as the opposite. All of which is to say there was something so strange and absorbing and pure about Vanchiro. As everyone else around him seemed to be growing into their identity as “Nets fans,” here was a guy who had pledged 300 percent allegiance. There was no tentativeness, no detachment, no ironic curiosity — just neon, loud specs, and a lot of arm waving. He claimed to be someone who just loved dancing and “spreading cheer,” and that sounded about right. I would watch him on the screen and think to myself, That guy looks like he’s really having fun, forgetting that he was about 10 feet away. He seemed like he was somewhere else — someplace we all wanted to be.

According to his family, everything changed when he was ejected from a Nets-Knicks game earlier this month. He had tried to bring his blissed-out vibes to Madison Square Garden, but fans in his area complained that he was being “unruly.” A photo circulated of Garden security carrying Vanchiro up the aisle; he was missing his prosthetic leg. His fiancée remarked that he became “a completely different person,” paranoid and slightly delusional. “I’m Jeffrey Vanchiro right now,” he told a reporter from ESPN. “I’m looking for Jeffrey Gamblero. If you find him, let me know … I’m alive. I’m not my normal self, but I’m working towards getting back to that.” Over the weekend, whatever demons had surfaced over the past month became too much to bear. Vanchiro jumped out a second-story window and died soon thereafter.

During the fourth quarter, with the Heat comfortably ahead, a group of people who were presumably Vanchiro’s friends began circling the lower bowl, trying to spark a “GAM-BUH-LERO” chant. It didn’t quite catch, mostly because the Nets’ inability to close the gap had sapped our energy. Nobody seemed to possess the dynamism to take over. With a couple minutes to go, the crowd began to thin out. But after a couple defensive stops, the Nets pulled to within two and it was the loudest it had been all night. During a timeout, a crew of Nets dancers held up a “Gamblero” shirt and began moshing to “Ante Up,” and you wanted to believe that something good might happen. (It didn’t.)

I never had any desire to engage or talk to him whenever he danced down the aisle. He was just part of the show. He was like so many over-the-top, head-to-toe fans or courtside characters at arenas across the country. But Vanchiro’s subterranean backstory was what made him seem so distinctly New York. Few fans at Barclays knew about the professional gambling or the worldwide renown of Smart Crew. You would have never guessed that he spent time behind bars or had a prosthetic leg, or that he had once punked a Fox 5 news team, feeding them sensational tales of New York’s graffiti gang life. But he was a constant presence and, given the setting, that counted for a lot. Unless you grew up a New Jersey Nets fan, there’s a lot about the general Brooklyn Nets experience that can feel like a simulation. Everything’s a bit off: the “Fan Since Day One” T-shirts, the “Brooook-lyyyyn” chant, all those crisp jerseys draped over dress shirts and ties, the way most of the celebrities on the big screen look as if the Nets gear has been forcibly Photoshopped onto their bodies.

Of course, that’s also what makes it exciting. History, tradition, culture: Everything is a work in progress. The path is being made by those who walk it. That’s why there was something so striking about Vanchiro, even more so when you realized he wasn’t some paid mascot, he was just living life, appreciating his latest new beginning. The team could be down 15 and he would still take to his unofficial job with an almost freakish devotion, as though he was exactly where he wanted to be. In a way, “Gamblero” appeared to be what the Nets themselves aspire to one day become: a thing reborn, a type of commitment that is fearless and total, a being truly comfortable in his own skin.

Filed Under: NBA, We Went there, Hua Hsu, Brooklyn Nets

The Year in Holy S#!t: Thunder-Grizzlies Suffocates the Concept of Time