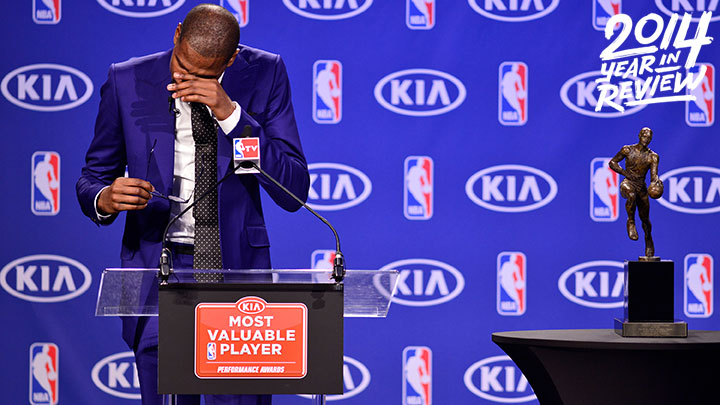 We’ve never seen an NBA MVP speech like Kevin Durant’s MVP speech. To be fair, there haven’t been all that many. Before Dirk Nowitzki’s bittersweet 2006-07 campaign, an MVP winner usually received his trophy before the home crowd during a playoff game. An arena filled with thundersticks and 19,000 amped-up fans doesn’t really lend itself to extemporaneous emotional introspection. Plus, David Stern did most of the talking back then anyway.

All of our critics’ best-of lists, the Year in Holy S#!t sports moments, and our series on What We Saw in 2014.
In the way it went from humble to determined to thankful to tearful, Derrick Rose’s 2010-11 acceptance speech comes the closest to Durant’s. But Rose spoke for less than five minutes. Durant spoke, haltingly, for nearly half an hour — 26 minutes of, at times, almost unbearable vulnerability.

It isn’t that tearful athlete speeches are uncommon; they aren’t. It’s just that they usually come at the end. At the retirement ceremony or the Hall of Fame enshrinement, when the swagger and aspirational machismo have faded, and it’s OK — expected, even — for the tears to flow as the measure of a career is taken.

Kevin Durant was 25 years old when he made that speech. He first chokes up about two minutes into it, with the initial mention of his family. You can sense the audience’s uncertainty. I remember reaching for my remote, finger hovering over the channel button, what with my low tolerance for awkwardness and sincerity. With so much about professional sports curated, packaged, and branded — the Sprite Slam Dunk contest, the BBVA Rising Stars Challenge, the Kia NBA Most Valuable Player Award — it’s shocking when, less than three minutes into a speech from an athlete in the absolute prime of his career, you’re suddenly confronted with something raw and real. You’re used to squinting at pro athletes through the blessed glow of the natural talents and uncommon skills that make their arrival in the big leagues seem preordained, writ in stone by the finger of God. I mean, of course Kevin Durant is the MVP.

“My dream was to become a rec league coach,” Durant says early on, smiling and sheepishly self-aware of how crazy that sounds. “A rec league coach. That’s what I wanted to do.”

We didn’t see the doubts, weren’t there for the countless fateful Rubicons, known and unknown, that crisscrossed Durant’s life. We didn’t see the sacrifices, the solitary jumpers when nothing at all was promised or certain, before the millions, before the adulation, back in Prince George’s County when dreams were paper planes aimed much closer to the horizon. We didn’t see any of that until Kevin Durant took the time to show it to us.

No, we’ve never seen anything like Durant’s MVP speech.