The Year in Holy S#!t: Thunder-Grizzlies Suffocates the Concept of Time 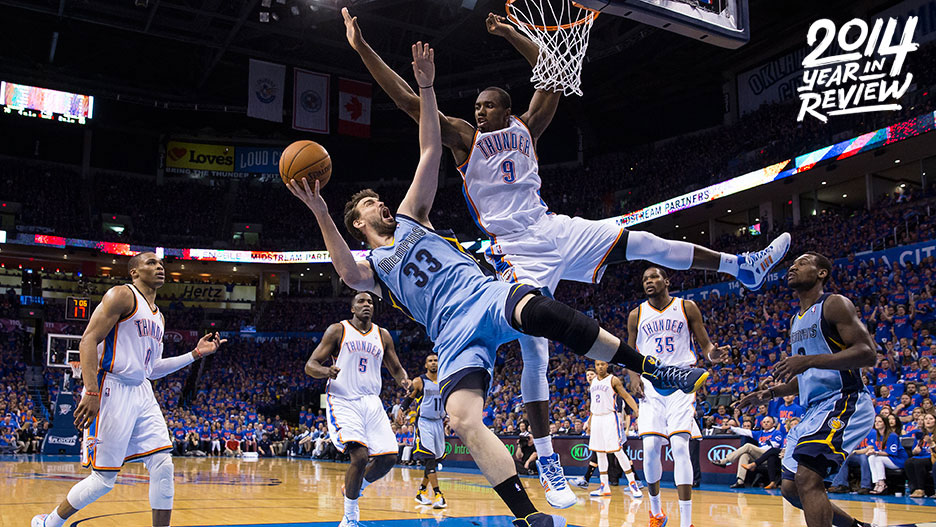 Two game-saving, four-point plays in consecutive games — one of which happened to be the shot of the year. A masterwork of individual defense that seemingly reversed nearly four years of progress from the world’s second-best basketball player. A game decided by a shot that went up a tenth of a second too late. “Mr. Unreliable.” A strike to the face that might have altered the course of the playoffs. A season’s worth of story lines, pressurized into a two-week capsule of seven unbelievable games between the Memphis Grizzlies and Oklahoma City Thunder. All in the first round of the 2014 NBA playoffs.

The Spurs achieved near-perfect basketball harmony on their road to a championship, but the 2013-14 Spurs were only one team. A game can’t approach perfection without two sides. The Thunder and Grizzlies didn’t play a perfect game; they played four, as the series made history by being the first to reach overtime in four consecutive games. The Grizzlies walked away from those four games 3-1, yet, somehow, the Thunder won out. It was the perfect stalemate that wasn’t.

All of our critics’ best-of lists, the Year in Holy S#!t sports moments, and our series on What We Saw in 2014.
You do remember all that, don’t you? It’s been a little more than seven months, but it feels like longer. It’s a temporal illusion that both teams summon in their own way.

The Grizzlies are exhausting. Their defensive pressure is constant and draining, like a good heat lamp. The smallest measurements of time are magnified against the Grizzlies; every second on the game clock is like a corn kernel, blown up from the mounting pressure. And that’s only on one side of the ball, never mind the time Zach Randolph takes to whittle down his defenders in the paint. Playing the Grizzlies is to suffocate inside a popcorn machine.

The Thunder are exhausting, too. Time in a Thunder game is measured by the distance between the last astonishing play and the one that is about to happen. Then an angry Russell Westbrook dunk leapfrogs a timely one-legged Kevin Durant fadeaway, and suddenly we’re all goldfish, capable only of grasping the moment in front of us. A 17-point deficit with seven and a half minutes left in a game would likely be an insurmountable challenge for most teams. For the Thunder, bringing the margin all the way back to zero can feel like an inevitability, no matter what the clock reads. In 2014, Matthew McConaughey brought the concept of eternal return to the mainstream. Later in the year, Durant and Westbrook explained what in the hell it meant.

The only question left is how this series will be remembered. That it’s a question at all is a bit of a disappointment. The gold standard for first-round series of the last five years is probably the Bulls-Celtics series in 2009, and at least 75 percent of the reason why lies in the awe-inspiring triple-overtime Game 6 that kept the Bulls alive. The series ended on a flat note, with a double-digit Celtics victory in Game 7, but it hit its crescendo just late enough. The Grizzlies-Thunder series, as unprecedented as it was, wasn’t set up in a way that promotes that kind of legacy. Games 6 and 7 were blowouts. The Thunder swept history under the rug so quickly you’d be forgiven if you forgot they were co-conspirators.

There has been a role reversal this season compared to last. Memphis is an outright titan out West, and Oklahoma City is climbing out of a hole it fell down in the season’s first act. Coincidence or not, the Thunder’s record is almost exactly aligned with where the struggling Grizzlies were at this juncture last year. Time is a flat circle, and the arc being drawn is nearing four o’clock. With any luck, we’ll do this all again in 2015.

The NFL Buddy System: How One Team Helps Another Make the Playoffs