13 of the Most Underappreciated Movie Acting Performances in 2014 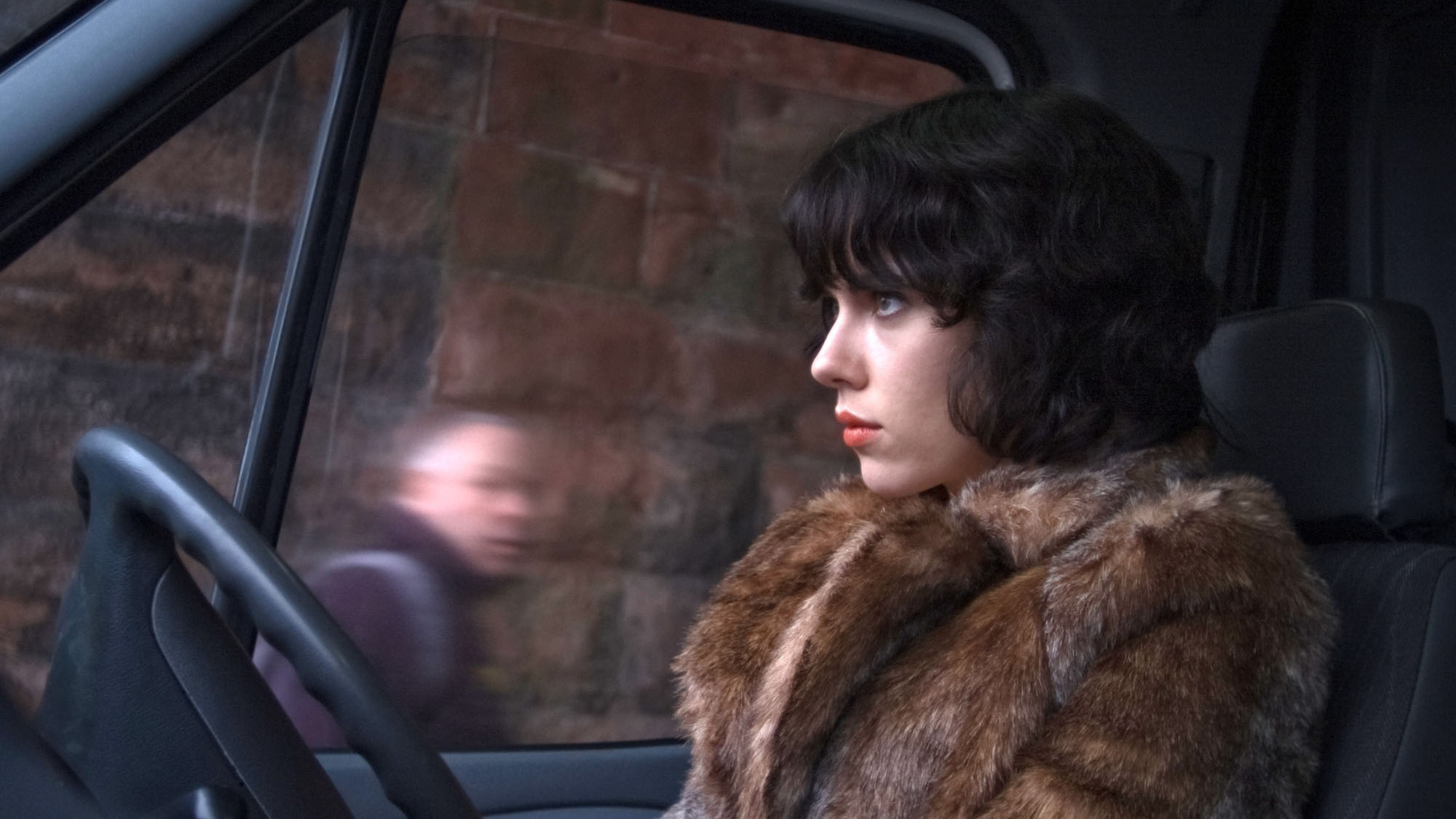 The contentious, headache-inducing onslaught of prizes for acting usually end up going to the same four people. Even when they’re the “right” people, dozens go wronged. So before listing the acting I liked irrespective of how much it’s been praised, let’s bow down before a baker’s dozen of the year’s underappreciated performances. This is an Oscar-agnostic list, but for what it’s worth, Academy voters, online voting opened for business yesterday.

Scarlett Johansson in Under the Skin 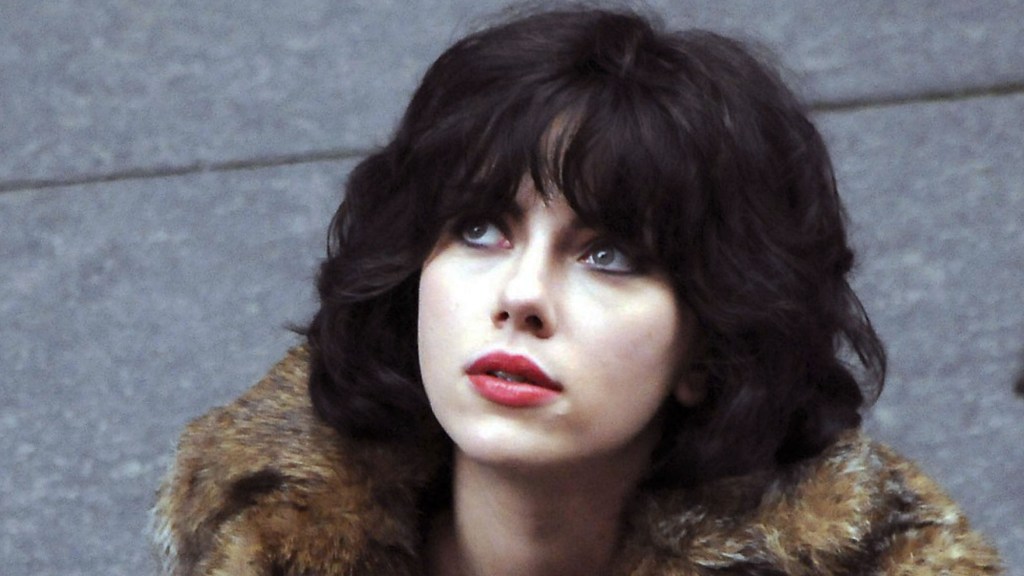 Only Marion Cotillard might be having a better stretch than Johansson right now. It’s the deceptive scope of the project Johansson appears to have set for herself that’s amazing. She has reconsidered the terms of her voluptuousness, of what it means to be looked at by men. She has given three very different performances in science fiction films for three different directors. This one, for Jonathan Glazer, is just an acting masterpiece. Johansson is something from another planet who comes to Scotland, takes the ripe body of a frightened woman, and discovers the benefits and costs of that ripeness.

All of our Oscar coverage!
The film is a study in what makes us human — and what makes humans (OK, some men) awful. And Johansson registers every affront with increasingly horrified eyes. There doesn’t appear to be much to her performance. When she talks to men, she turns on a British accent and her charm. When they’re disposed of, she shuts off. But the hunting, haunting nature of the performance keeps going. Lots of other actors have done blankness — from outer space, no less — and done it vividly. Johansson’s version is captivating for the ache she gives. The use of music and sound in this film is exquisite, but Johansson makes you sense something else: the acquisition of a soul. 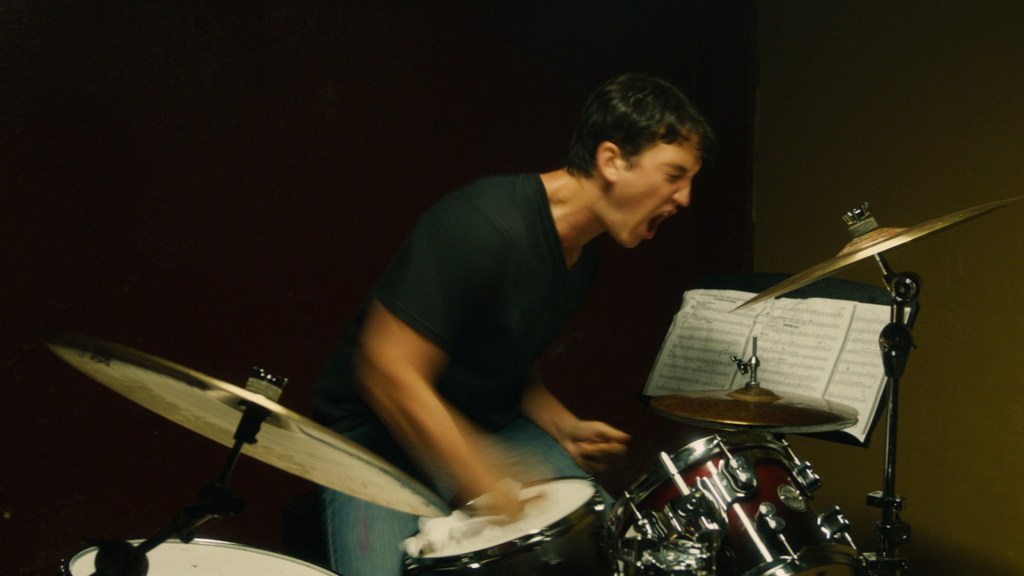 I don’t go in for purely physical acting (sorry, Eddie Redmayne), but the connection Teller makes to those drum kits is otherworldly. I don’t know whether he’s truly any good as a drummer, but he’s such a persuasively charismatic actor that I don’t care. What you get from Teller here is that music isn’t a way of life for Andrew Neiman. It is life. What’s funny is that for all the pounding he gives the kits and all the pummeling J.K. Simmons gives him, I couldn’t take my eyes off Teller’s face — the chilling, exhilarating mix of enraged arrogance and naked want. Simmons is memorably intense, but what I remember is the grenade-caliber violence of his voice. Teller gives you all the lacerating shrapnel and scars.

Hilary Swank in The Homesman 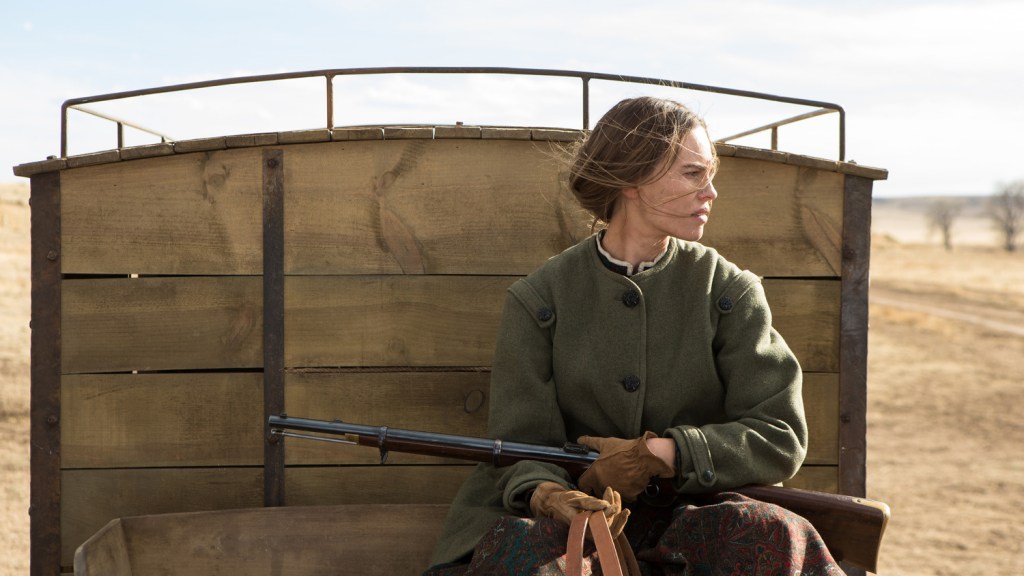 Don’t laugh. The trouble now for Swank is that she’s been so devastatingly good — and well-rewarded for it, too — that she might never again be taken as seriously. This is another of her gorgeously done, apology-free, glamour-averse depictions of womanliness. She’s an eligible 19th-century plainswoman who pauses a personal fight against spinsterhood to transport three mentally ill women in a prairie schooner. All the usual goodness comes through as well as a blunt morality. What’s new for Swank, what’s heartbreaking about her in this film, is the desperation for love radiating from her. I don’t think she ever acts for awards, and this time the movie gives up on her just past the halfway point. When that happens, the only thing you want for her is a séance.

Ansel Elgort in The Fault in Our Stars 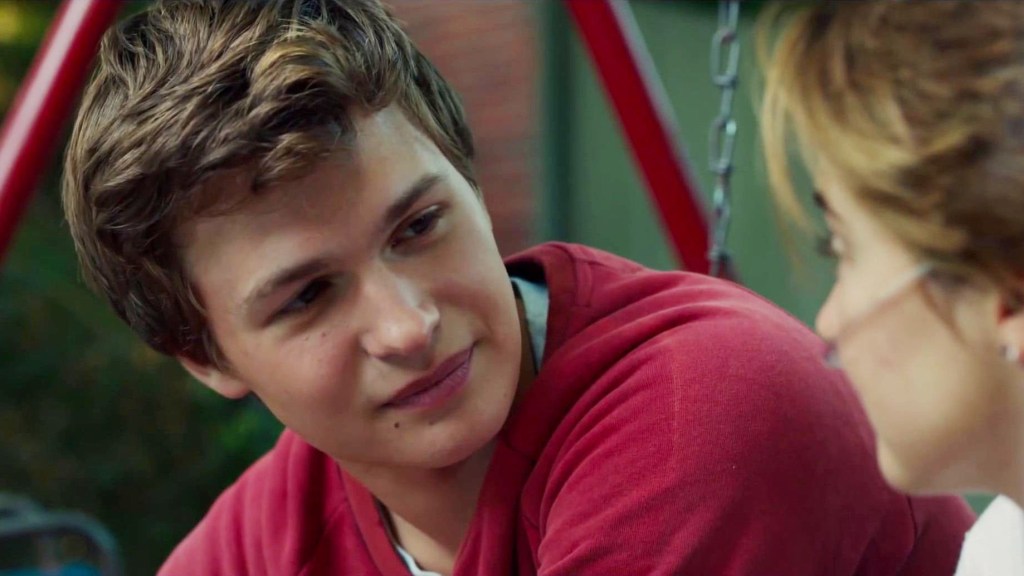 This movie’s nauseating earnestness reaches its apex (or is it the nadir?) when the two nobly sick teens give each other a tongue bath in Anne Frank’s house. It’s the worst scene of the year. Of the year! Yet not even that could stop me from feeling something beyond irritation for Elgort. He’s not yet much of an actor, but sometimes you don’t need that. He’s got a gawky goodness that makes him neighbors with Swank. You feel whatever it is that Shailene Woodley is feeling for him, which is pretty much everything. I spent the first 30 minutes wishing his quirky prince routine would go away. When he actually left, I couldn’t believe he was gone. He was also fantastic in Jason Reitman’s Men, Women & Children, still the worst American film of 2014. This means that Elgort is doing apex work in other people’s nadirs. 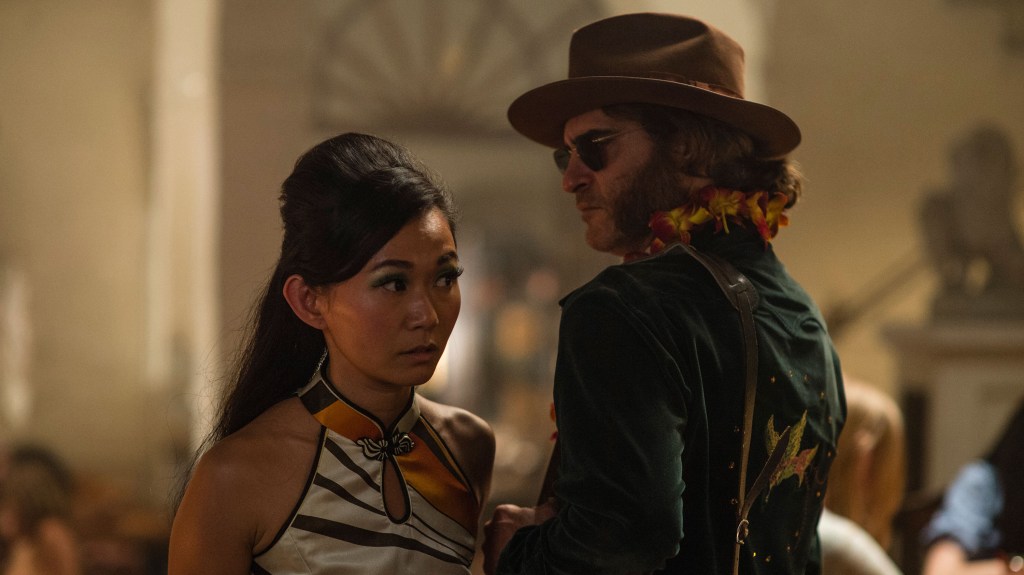 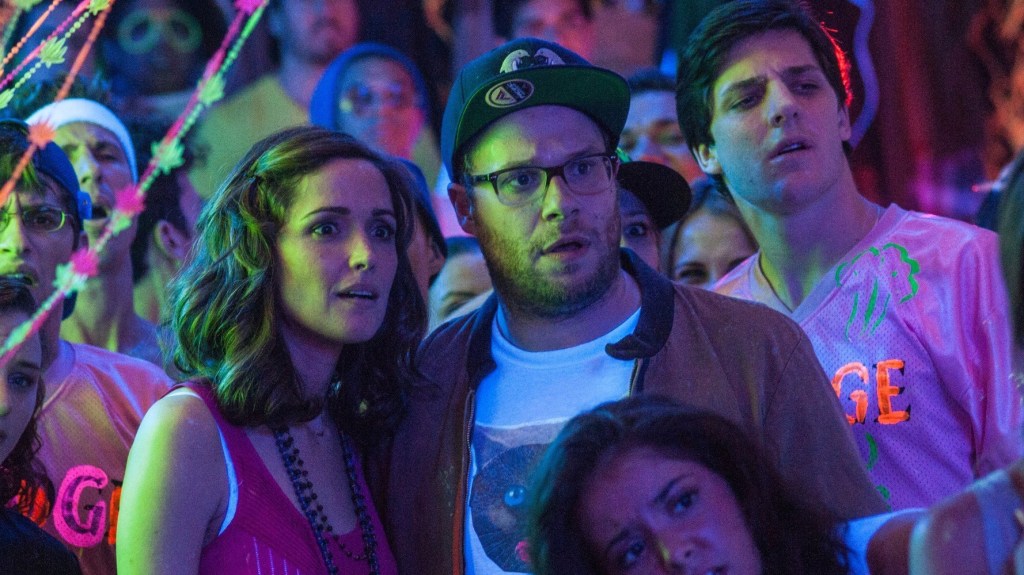 No, she couldn’t keep up with Seth Rogen, who spends this smartly boundary-warping comedy in rare form. But she’s her own riot of wifely calculation and wistful insecurity. Byrne usually works with a flawlessly a-geographical American accent. Here she puts extra mustard on her native Australian tongue, so that not understanding what she’s saying is as funny as comprehending her. Her reactions to Rogen and Zac Efron and Dave Franco (both terrific, too) are as witty as what they instigate. But it’s a sequence during a frat-house blowout where she concocts a hookup when she’s at her best: basically, a thirtysomething woman remembering how much fun it was to pretend to be in Cruel Intentions.

John Lithgow and Alfred Molina in Love Is Strange 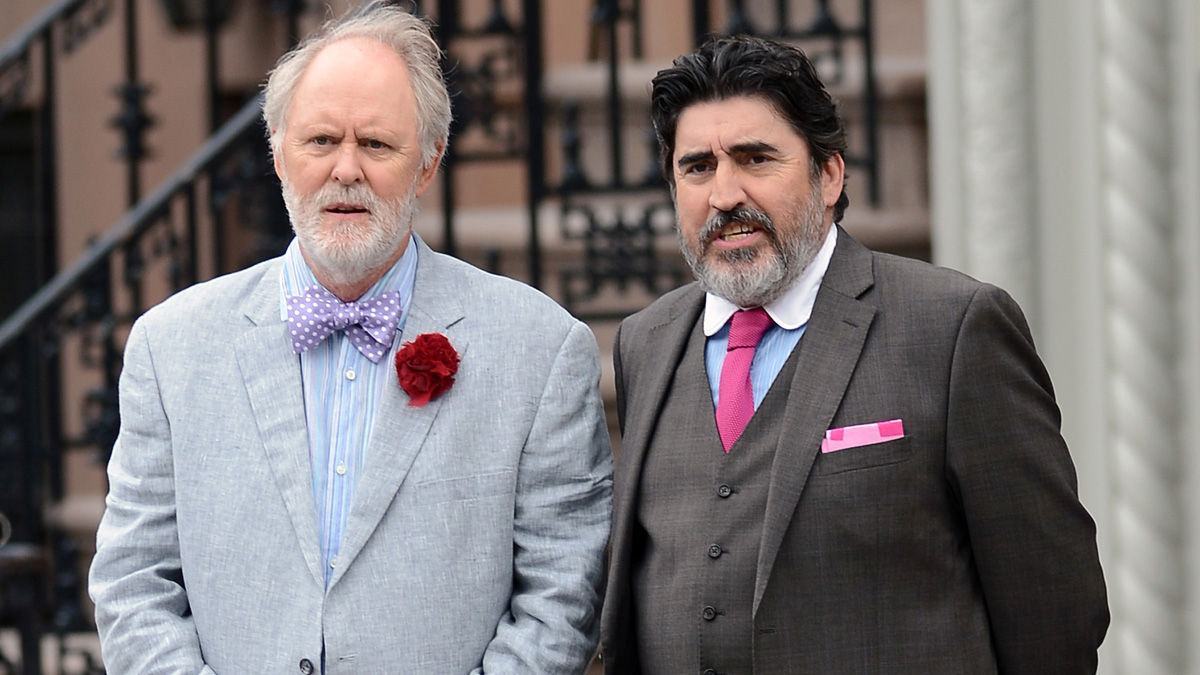 Writing about these two together disserves what each independently does. They play two New Yorkers who, after years together, finally marry, only to lose their apartment and live, temporarily, without each other. Lithgow plays a kind of sad, physical comedy. Molina, as the younger of the two, plays exasperation and regret. Their scenes apart outnumber their moments together. But it’s a testament to the hard, unromantic beauty of Ira Sachs’s movie and the bond in it forged between Lithgow and Molina that these two very different, emotionally intelligent performances share a single vibrant heart. 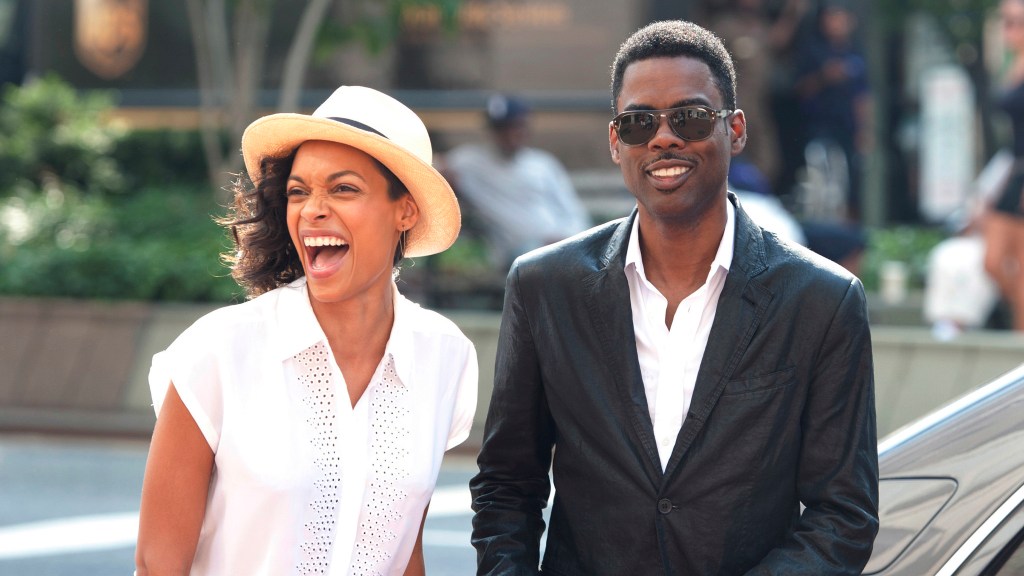 In the last two years, Dawson’s turned the corner from “huh?” to “aha!” You can tell because in Chris Rock’s movie, she’s playing one of the least plausible journalists, mothers, and girlfriends (and film critics), and yet she’s never been better. The happiness and fury that come off her feel real. What’s true of Byrne’s opposite in Neighbors goes for Dawson here. Not many of the jokes are hers. But she’s so far ahead of Rock emotionally that when she stands in an entryway and tearfully recites her favorite rappers, I wept too. It’s not that I never thought Dawson could do that (although maybe I didn’t). It’s that someone like Rock knew she could. 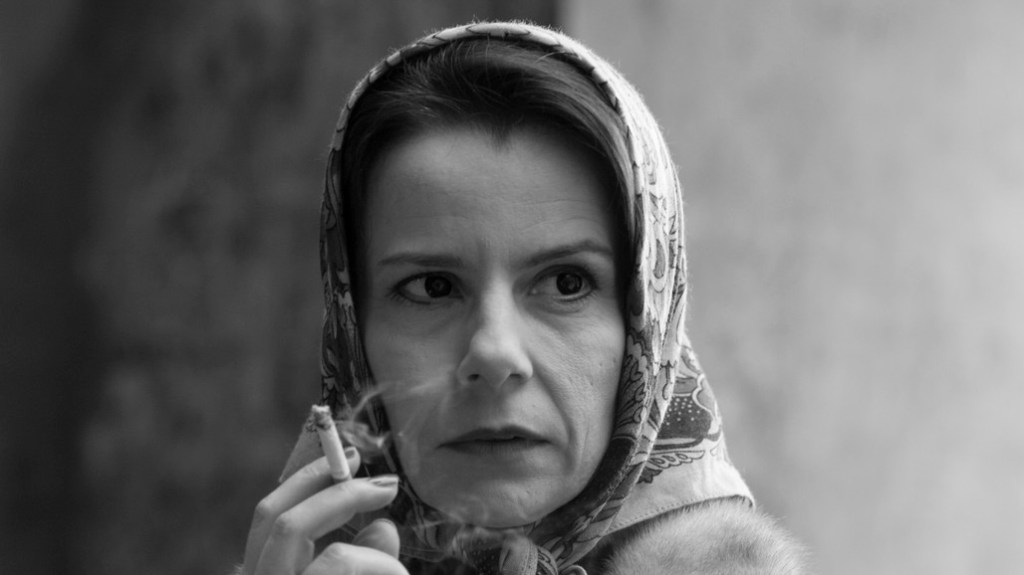 Officially, this Pawel Pawlikowski superb mini-opus is about a young nun in the 1960s who learns that she’s Jewish. But it’s the woman playing the nun’s drunk aunt — a former Stalinist prosecutor — who grabs you. Kulesza narrows her face and speaks her Polish like she’s serving gruel. But her dispassion masks tragedy and regret. This is one of the most remarkable dramatizations of high-functioning misery I’ve ever seen. Every time Kulesza takes a drag on a cigarette or a swig of alcohol, she realigns the gravitational pull of this movie.

Andrea Suarez Paz in Stand Clear of the Closing Doors 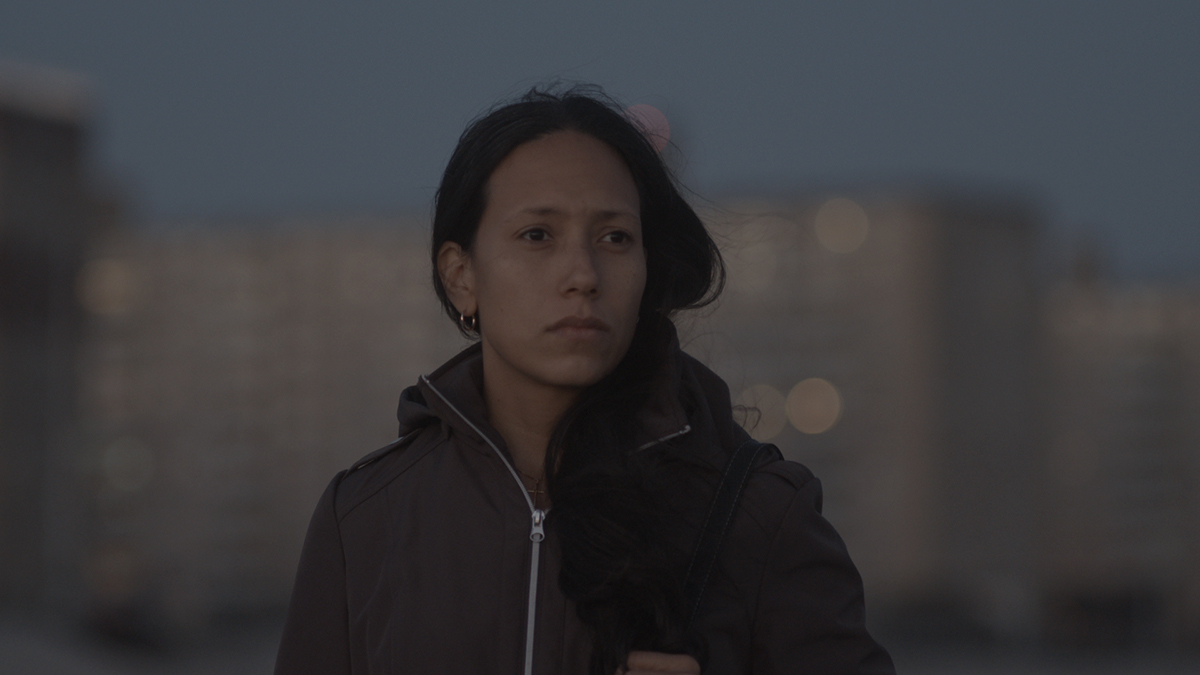 I went into Sam Fleischner’s film with the understanding that it was about an autistic kid who spends a couple of days and nights lost in the New York subway system. There was no way to know how completely the mother looking for him would wreck me. Suarez Paz doesn’t need you to like this woman (you do anyway); she gives the role rough, rueful edges — part wounded hen, part bloodhound. The stress in her performance swells. What else will she lose? Her job, her seemingly tenuous marriage, her mind? The movie came to art houses in the first half of the year and then went, but it’s hard to believe that anyone who caught it didn’t think, Who the hell played the mother? Andrea Suarez Paz, bitches. Stand clear! 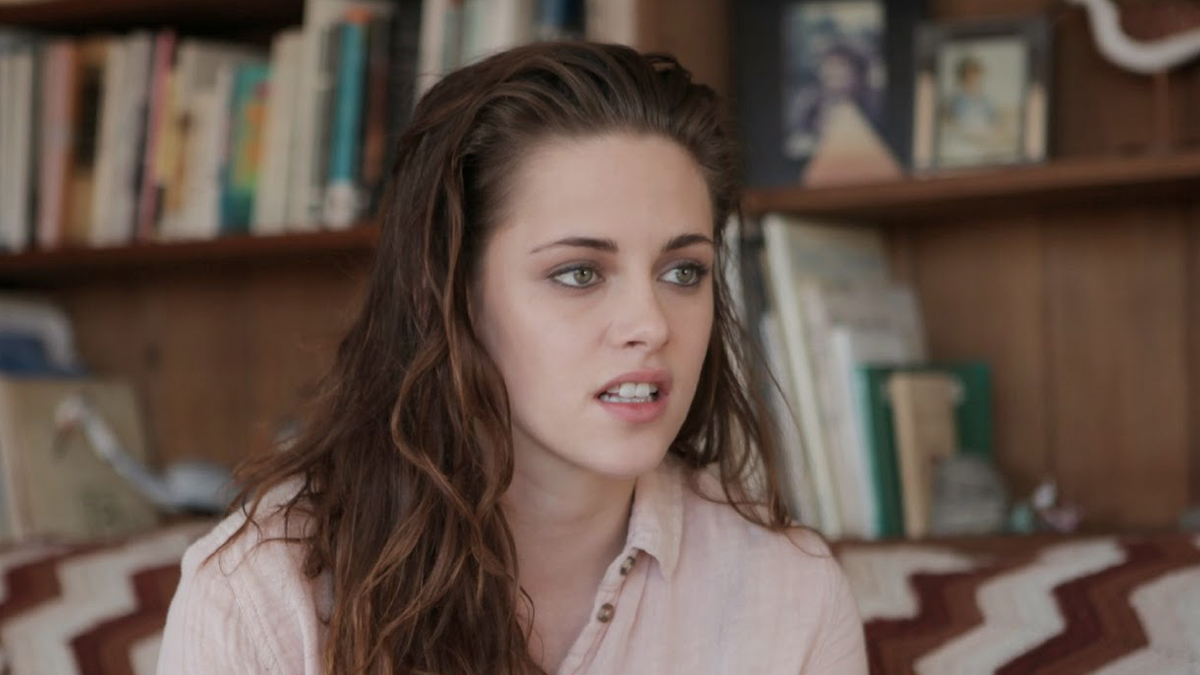 Just a couple of weeks ago I went on and on about how Kristen Stewart has become a serious actor and what a deep listener she appears to be. The film I was writing about, Still Alice, is lousy, so I don’t want to belabor these points, although, for Stewart skeptics or so-called Twi-Hards, they bear repeating: The adult talent here is now inarguable. Her rhythms are thrillingly natural. You never know what she knows, where she’ll go, how she’ll interpret a line. It all gives her work a kind of suspense. It’s inconceivable how anyone can watch that movie, believe that Julianne Moore is astonishingly un-showy (she is!), and not feel the same about what Stewart does. But it happens. Hopefully, it’ll stop happening to her. 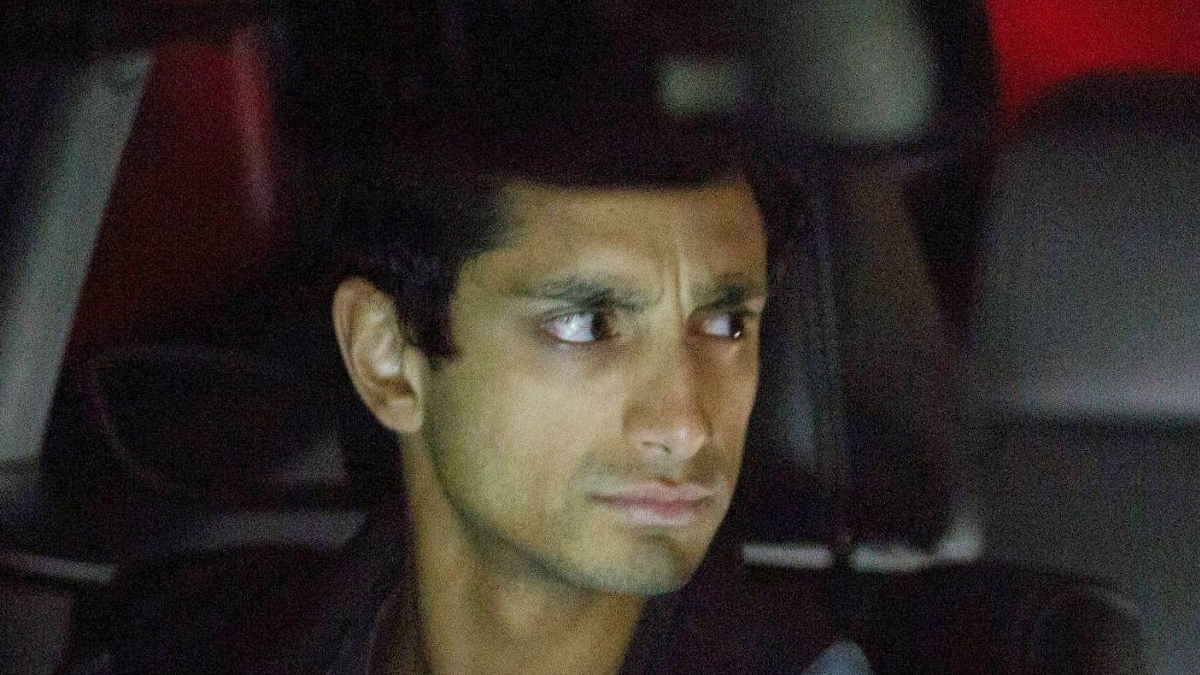 Open Road FilmsThe same thinking about Stewart with regard to Moore should apply to Ahmed with regard to Jake Gyllenhaal, who wills himself far beyond being miscast. Compared to all the work Gyllenhaal is happy to show you he’s done, it probably looks as if Ahmed, playing Gyllenhaal’s “intern” Rick, got it too easy. But it’s the little things he does here that add up: the tics and stammering, the looks across to his increasingly insane costar. Ahmed is invested in Rick’s sad, unsavory backstory. He also owns that Rick is the moral compass nobody heeds — well, almost nobody. I’d follow this guy wherever he points.

Chadwick Boseman in Get on Up 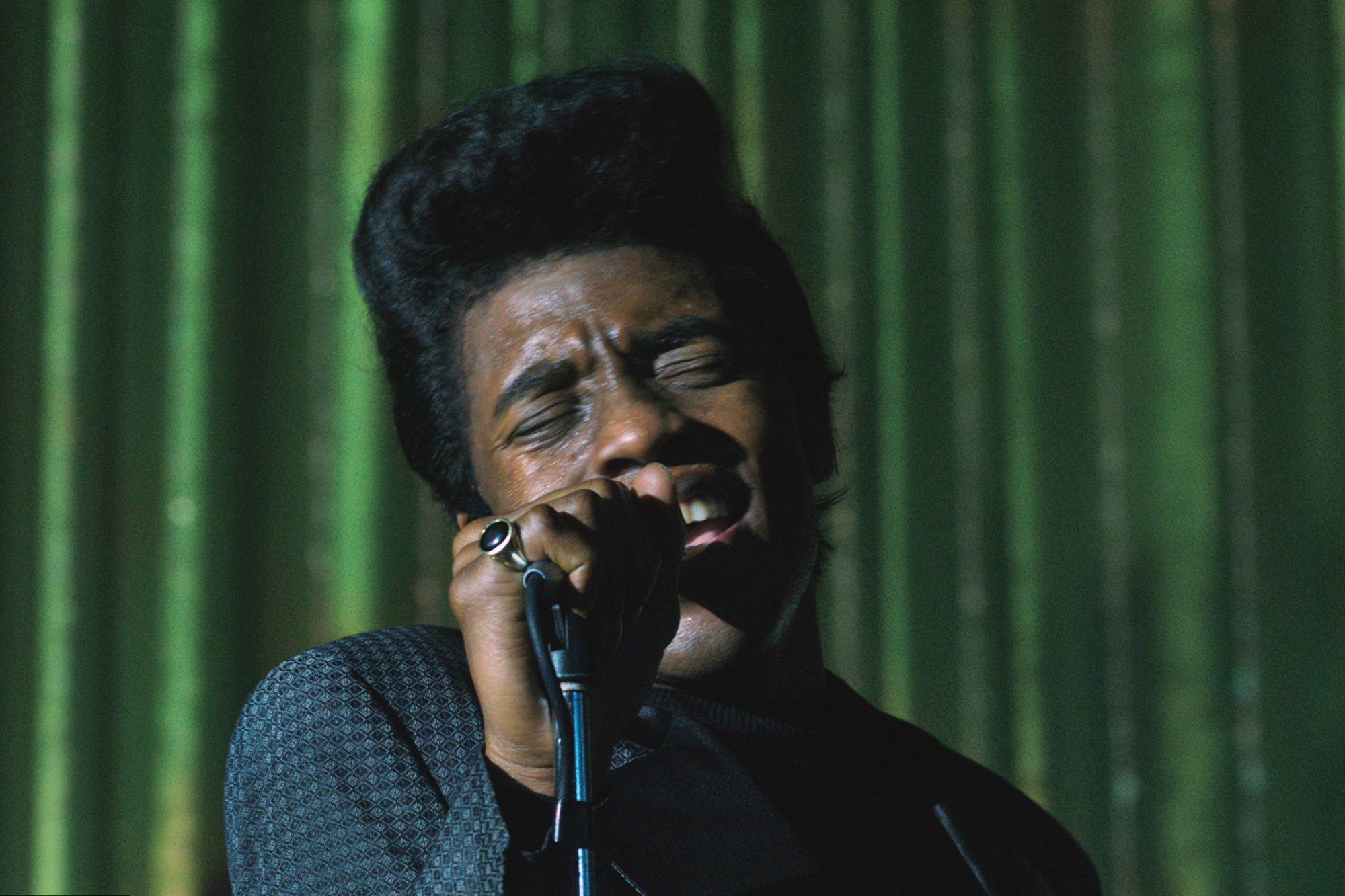 We all need to go to jail right now. The crime? Forgetting — or failing to keep talking about — the power-plant performance this man gave. Boseman’s James Brown was some refraction of curdled childhood trauma and American-dream swagger. He’s so good here that the talking-to-the-camera works and the just-off-screen domestic violence adds complexity to his crass allure. Really, though, it’s the stage stuff where Boseman is at his mightiest. This is lip-syncing. It’s also a spiritual communion. The vocals are Brown’s, but Boseman is acting the stank in every single “heh” and “hit me.” He passes Brown’s cold sweat onto you.

Some Other Acting I Liked a Lot