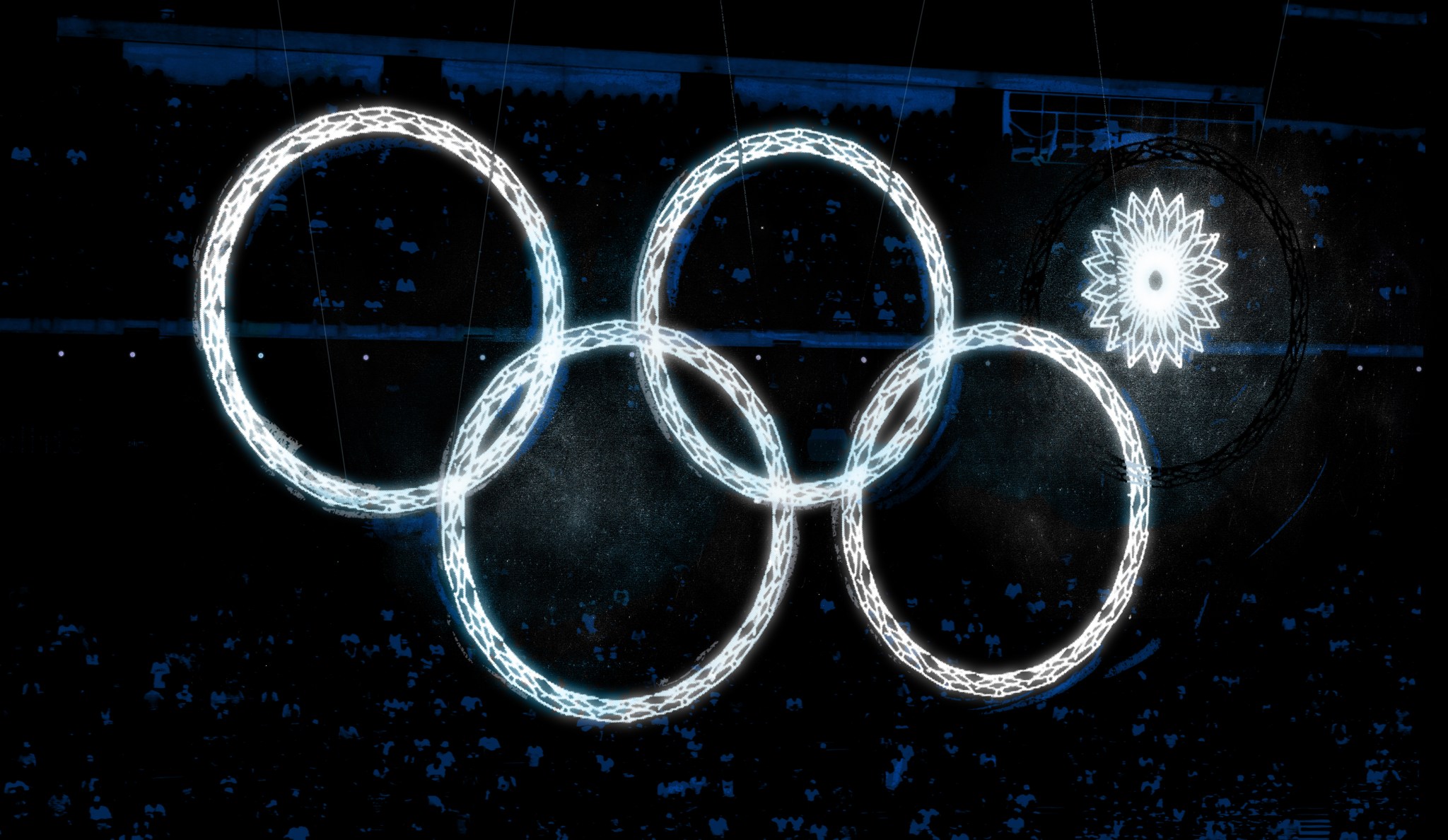 At the start of this year, Russia — a country that had recently banned gay “propaganda,” harassed and imprisoned political dissidents, and was run by a man who appealed to imperialist traditions and fear of foreigners — turned a seaside summer resort not far from a hotbed of separatist and terrorist activity into an impregnable military zone, and hosted the Olympic Games.

The second Fundamental Principle of the Olympic Charter calls for “promoting a peaceful society concerned with the preservation of human dignity.” Russia, of course, wasn’t the first nation to roll up the Olympic Charter, light it on fire, and call it a torch. In 2008, the Chinese government used the Beijing Summer Games as an opportunity to crack down on dissidents. In 2004, Greece paid more than $11 billion to host the Games, loosening fiscal restraints and building debt, contributing to a crisis that ultimately helped trigger a global recession. In 1996, Coca-Cola alone spent $350 million on promotions, advertisements, and tie-ins. In 1984, the Soviets boycotted the Los Angeles Summer Games. In 1980, the United States boycotted the Moscow Summer Games. In 1972, Palestinian terrorists massacred 11 Israeli Olympic team members. In 1968, military and police in Mexico City killed dozens of protesters only 10 days before the opening ceremonies. In 1936, Nazi Germany hosted the Olympics. Hitler hosted the Olympics!

So 2014 wasn’t exactly the year the Olympics failed its own ideals. But it was the year it had a hashtag for failure. Within days, the Twitter account @sochiproblems had hundreds of thousands of followers — more than Sochi’s official account.

The opening ceremonies themselves provided the perfect example of #SochiFail. At the start of the show, five enormous, sparkling snowflakes were supposed to explode into the Olympic rings — but the fifth malfunctioned and failed to open. It just hung there: a glittering, giant asterisk, a symbol of the first global sporting event that was collectively watched as a massive spectacle of irony instead of hope.

It was funny, for a while. Fifty billion dollars couldn’t buy a door handle that worked? #SochiProblems. The faucets spewed sewage? #SochiFail. The temperature during the Winter Olympics hit 68 degrees? LOL. Hiccups are charming when they’re happening to someone else. Before long, everything started to intermingle. Social media became the filter for watching the Games — and the games around the Games. Everything seemed only a few thumbstrokes away from becoming emoji. Stray dogs roamed the streets of Sochi — and the newsfeed of my Facebook account — and became so ubiquitous that late-night shows lampooned them. Athletes tweeted about elevator doors opening onto empty shafts — or not opening at all. There were slideshows of a pair of flamboyant figure skating analysts. Vines of a dance-off between bobsledders from Jamaica and Team USA. Pictures of Vladimir Putin drinking with Dutch athletes at the Holland Heineken House. And then pictures of Putin posing with Team USA. Photos of semi-professional Cossack security guards whipping punk-rock protest group Pussy Riot with short, thick, braided leather whips.

Even as ski jumpers landed in puddles of melted snow and pixies lutzed and twirled in Sochi, civic unrest led suddenly to the collapse of the Russian-backed government in Ukraine. Within days, Russian soldiers were moving. Within weeks, Putin had used the provocation as a pretext to annex Crimea. It had nothing to do with the Olympics, and yet the Olympics had everything to do with it. Sochi, in the unruly mountains at the edge of the country, haunted by an old empire, was part of the same projection of power, and the same vision of an almost mystical national identity and strength. Citius, altius, fortius. Faster, higher, stronger. 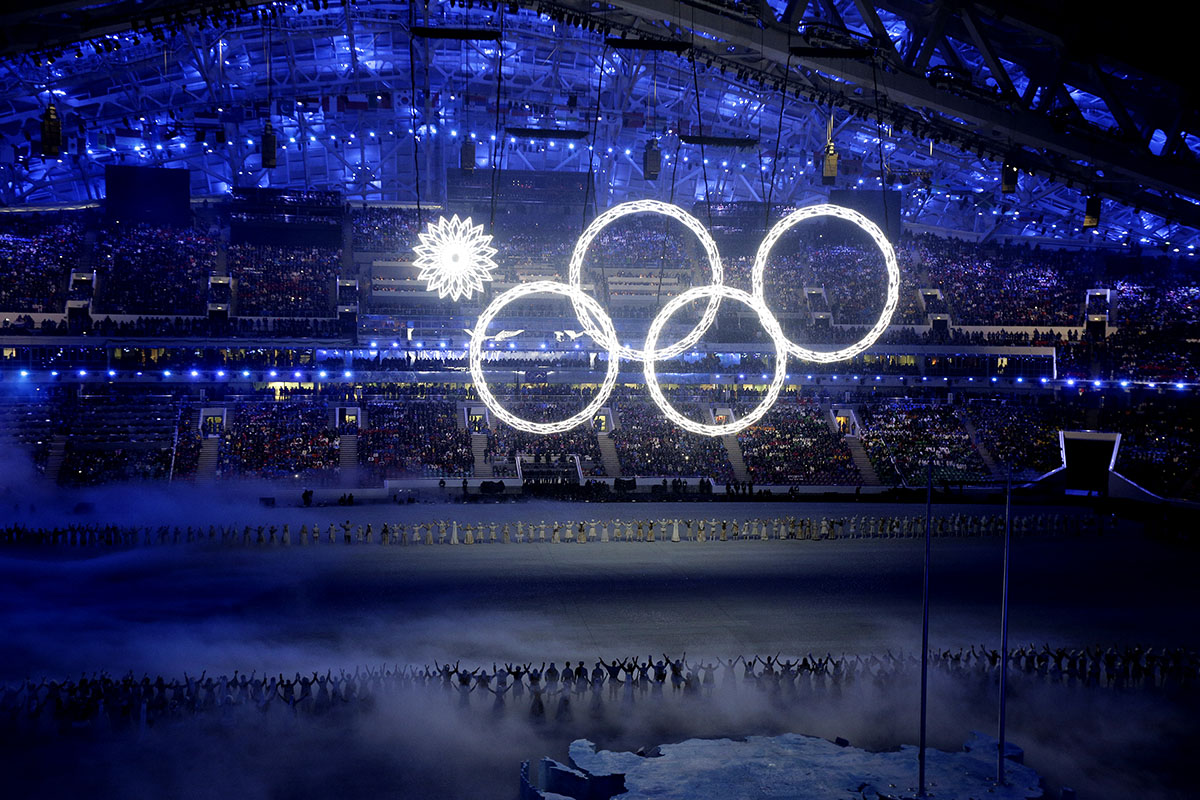 By the end of the year, Russia was under sanctions and mired in a currency crisis. People watched their wealth vanish by the hour. Last week, Putin gave a press conference to discuss the economic catastrophe. The sanctions, the demands for nuclear disarmament, the warnings against military interventions in Ukraine — they were all part of a long-planned plot by the West, Putin claimed, to cripple Russia. Even before the annexation of Crimea, “unprecedented and clearly orchestrated attempts were made to discredit our efforts to organize and host the Olympics.” Russia’s aggression, he insisted, was actually self-defense. He likened the country to its national symbol (and the Sochi mascot): a bear. “They will always try to put him on a chain,” Putin said, “and as soon as he is put on this chain, they will pull out his teeth and claws.”

The slightly gleeful, prurient quality of the crowdsourced chronicling of Sochi’s difficulties — disaster journalism-lite — disguised a deepening disquiet about the Olympics. It may have been easy to get excited about Norway’s curling outfit or T.J. Oshie’s holy-s#!t shootout goal, but it was harder and harder not to feel cynical about the costs.

The Olympics demand you to accept that sport is not only a matter of who wins and who loses, but also a spiritual endeavor. They were meant to connect support to virtue — uncorrupted even by money. But if you want to host them, you’d better be ready to pay. Not as much as Russia did; Sochi’s reported $50 billion cost is misleading. Russia had to construct a winter park from scratch, build infrastructure not directly related to the Games, and address special security concerns, and likely lost millions to graft; Sochi’s operating budget was closer to $2 billion. Still, a state-of-the-art sliding center for luge, bobsled, and skeleton costs tens of millions — which, considering the popularity of luge in most countries, is money you might as well set on fire. Study after study has shown that, economically, hosting the Olympics is almost never a good idea. The bigger price, though, and the one that was harder for some to swallow, was demanded by those noble idealists at the International Olympic Committee: stocked bars, special hotels, dedicated traffic lanes, free Samsung phones. (And this was after the IOC had been caught up in a bribery scandal 15 years ago.)

Eighty-eight nations competed at Sochi, a record for a Winter Olympics; at the London Summer Games two years ago, a combined 204 countries and territories sent 10,000 athletes. In May, NBC agreed to pay $7.65 billion for the rights to broadcast the Olympics until 2032. The Olympics are too big to fail. But they are also becoming too big to host. Bids between Munich and St. Moritz for the 2022 Winter Olympics were scrapped after public referendums. Stockholm made a formal bid but then withdrew. Krakow pulled out of the race after nearly 70 percent of voters rejected the bid in a referendum. Oslo withdrew its bid this fall. “Some people feel that that kind of money should be spent for hospitals, roads and so on and so forth,” Gerhard Heiberg, the Norwegian IOC member who had headed the organizing committee for the 1994 Lillehammer Games, told the New York Times. As for the bid made by Lviv … well, Ukraine had other things to worry about. That left Beijing, which is 120 miles from a ski slope, and Almaty, Kazakhstan — two places that were never about to put their bids to a popular vote.

The IOC, under new leadership, recognizes that the Games are troubled. It recently passed reforms to its bidding process in order to help host countries cut down on costs (most notably allowing host nations to hold an event in another country where the geography is more hospitable). But the reforms will only go so far.

The economic, moral, and political failures of the Olympics have created a strange dissonance — at least for me. Because I loved the Sochi Olympics. I spent every day — and much of the night — during the Games watching downhill skiing, ski jumping, speedskating, everything I could. I set my alarm for 3 a.m. to catch events live. I studied highlights. I read about the biathlon and learned its rules. I felt my heart race as I watched cross-country ski races. I studied tactics and weather conditions. I learned about the athletes. I wondered about the way their minds worked and watched their bodies move. I was in awe.

There are the Games, and then there are the games themselves. 1936 was the year that Hitler hosted the Olympics, but it was also the year that Jesse Owens became the first man to win four track and field gold medals at a single Olympics. Owens was black, the grandson of slaves. Swastikas on flags fluttered in the breeze.

The first man to congratulate Owens after he won the long jump was a tall, blue-eyed German named Luz Long. “It took a lot of courage for him to befriend me in front of Hitler,” Owens later said. “You can melt down all the medals and cups I have and they wouldn’t be a plating on the 24-karat friendship I felt for Luz Long at that moment.”

That handshake, of course, could do nothing to counteract the awfulness of Hitler’s vision of a world dominated by Aryan Übermenschen, a vision that hosting the Olympics was intended to project. Nor could it erase the treatment that Owens received when he returned to America. “When I came back to my native country, after all the stories about Hitler, I couldn’t ride in the front of the bus,” Owens said. “I had to go to the back door. I couldn’t live where I wanted. I wasn’t invited to shake hands with Hitler, but I wasn’t invited to the White House to shake hands with the president, either.” As an amateur, of course, he’d been unable to earn a living as an athlete; later, he’d race horses or dogs for wages.

But that handshake mattered. Athletes are not the saints that the founder of the modern Olympic Games, Pierre de Coubertin, promised. They are human. They make mistakes, and some of them do terrible things. (This was also, of course, the year that Oscar Pistorius was charged with culpable homicide in the death of his girlfriend.) Every year is the year we’re let down by our heroes. But sometimes they act in brave and beautiful ways, and those things resonate. It matters when brave and beautiful things happen anywhere, of course, but when brave and beautiful things happen on a field, while people are watching, the resonance builds.

Jesse Owens’s running also mattered — not more, but not less. The angle his body took against the track as he stretched out from the starting blocks. The way he held his slight, compact body erect when he ran — arms driving, legs churning, feet blurring, head perfectly still. The way he blew past others — because winning mattered too.

It may be a mistake to connect virtue to sports. It certainly felt that way this year. But watch a runner run. Let yourself be moved.