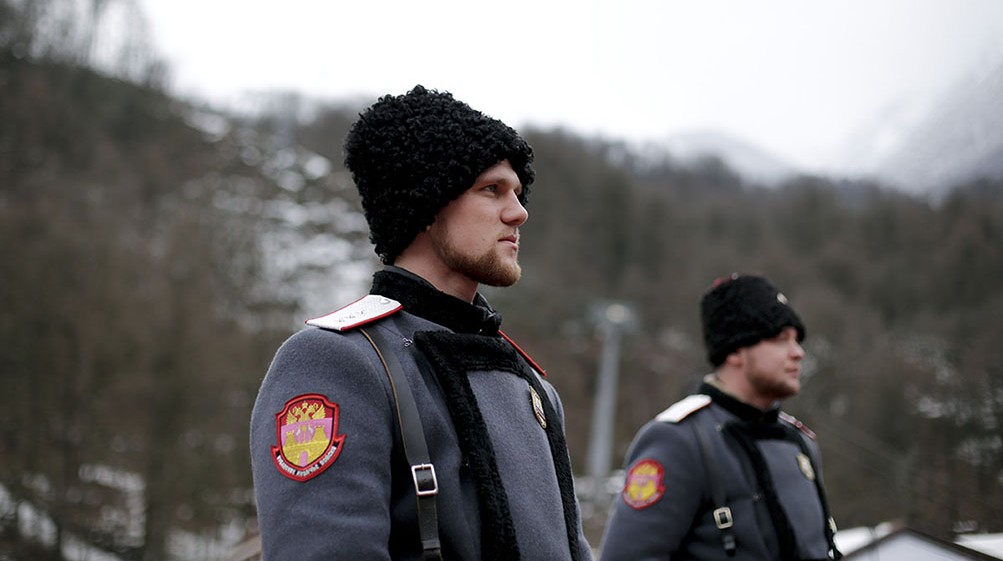 1. In 2007, Vladimir Putin went to Guatemala to present Sochi’s bid to host the 2014 Winter Olympics to the International Olympic Committee himself. It was, for once, not an election he was expected to win. PyeongChang, South Korea, was the heavy favorite. Sochi was a seaside summer destination with no infrastructure, no venues, and often no snow.

Putin put on a tie — black with thin white stripes, knotted tightly — and delivered a speech. “Mr. President,” he began, his Russian accent trampolining through the English words. “Members of the International Olympic Committee. Distinguished guests. Ladies and gentlemen.”

Sochi beat PyeongChang for the right to host the Games by four votes.

2. Sure, it’s easy to mock the pictures of Putin arm wrestling or shooting whales with a crossbow, or riding on horseback while shirtless, looking vaguely like a walrus on top of a horse.

But it’s hard not to be arrested by his face — the tiger’s head, the cat’s eyes. His skin emits a faint ectoplasmic glow.

3. Putin’s presence was the promise of his power.

“Real snow’s guaranteed,” he told the audience in Guatemala.

“We guarantee that the Olympic cluster in Sochi will be completed on time.”

“And one more special privilege: No traffic jams! I promise!”

He could do, he suggested, what mere leaders could not do.

4. The money was what mattered, of course. In Guatemala, Putin pledged $12 billion to transform Sochi from a summer resort into a winter one — far more than what South Korea and the third finalist, Austria, could spend. No one could doubt there would be more to come. In the end, Sochi’s price tag was more than $51 billion. The second-most expensive Games were the 2008 Summer Olympics in Beijing, which cost an estimated $40 billion. One highway and railroad project in Sochi cost more than the entire 2010 Winter Games in Vancouver.

The numbers are unbelievable but not impossible. The Olympics are Putin’s priority.

Putin has encouraged a hierarchical system of patronage, transactional bribery, economic opportunity, and political authoritarianism that has made some people very, very rich and left those people very much in his debt. The oligarchs are free to enrich themselves, basically, as long as they understand that they are not free to challenge Putin — and as long as they open their purses when he asks. This doesn’t make him a second Stalin. He fits into a much longer pattern of Russian rule than that.

5. After the vote, members of the IOC credited Putin’s appearance at the meeting for Sochi’s surprise win. “He worked very hard at it,” Jean-Claude Killy, a former skier, told the New York Times. “He was nice. He spoke French — he never speaks French. He spoke English — he never speaks English. The Putin charisma can explain four votes.”

Putin was nice. Sochi was chosen to host the Winter Olympics, Killy was saying, because Putin flattered the members of the IOC. He shook their hands. When Vladimir Putin, perhaps the most powerful man in the world, said it was an honor to be there with them, he gave them a way to tell a story they wanted to tell about themselves. 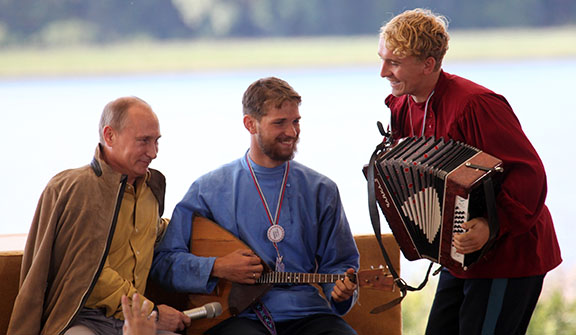 6. The story Putin wants to tell about himself, and by extension about Russia, involves a history that began long before the Soviet Union was formed and involves much more than Moscow. It stretches into Krasnodar, westernmost of the krais, to the edges of Greater Russia, the old czarist empire.

Krasnodar Krai has the kind of eerie landscape that suggests the edges of things — rivers, lowlands, and steppes, and mountains emerging from sea. The mountains have the tumultuous outline of land that, with nowhere to go, rose up. UNESCO has called the Western Caucasus “one of the few large mountain areas of Europe that has not experienced significant human impact.”

Even pictures of the landscape, wild and unconstrained, suggest the history that haunts the place is not of the 20th century but the 19th. One can imagine rounding a bend in the mountains and coming across a man, strangely dressed, riding a horse, casting long shadows in dusty light.

7. The Cossacks used to patrol this land, fierce soldiers on horseback. Just who the Cossacks were, was, and is hard to untangle, and always has been. Historians still debate to what extent they were an ethnic group or primarily a military caste. Their style was wild and their society egalitarian, and they left chaos in their wake. At the same time, they were associated with discipline. They were involved in rebellions against the czar, and yet they became his agents of conquest, increasingly incorporated into the military and Russian state. In 1860, Cossacks in the area where Krasnodar Krai now lies were organized into the Kuban Cossack Host, to settle and defend the Russian frontier in the Caucasus.

The Cossacks were both a manifestation of nationalism and also a distinct people with their own customs, at once manifestly Russian and strange. They became mythic figures, independent, strong, and free, representatives of natural nobility.

8. In 1863, Leo Tolstoy published a short novel called The Cossacks, in which a young aristocrat, wasting away in the debauchery of the cities, leaves Moscow to recover his spirit, to find “a life in which there would be nothing but happiness.” He goes to the Caucasus as a volunteer soldier and is drawn to the sensual world of the Cossacks, where men are adventurers, and it changes him.

“Suddenly he was gripped by such a strange feeling of groundless joy and love for everything that, in a habit he had had from childhood, he began crossing himself and expressing his thankfulness. He suddenly saw with the utmost clarity: ‘Here I am, Dmitri Olenin, so distinct from all other beings, and I am alone, God knows where, in the lair of a magnificent stag, who perhaps has never seen a man before, in a place where no man has ever been or thought such thoughts.’”

In one famous scene, a Cossack spots a Chechen disguised as a log in the river.

“‘Yes, it’s a Chechen all right!’ he thought with a surge of joy and, rising to his knees, once more took aim and peered at his target, just visible at the end of his long rifle. ‘In the name of the Father and the Son,’ he said, in the Cossack way he had learnt in his earliest years, and pulled the trigger.”

9. In their roles as the czar’s paramilitary, and as vigilantes, the Cossacks rampaged and spread terror. An American woman who traveled through Eastern Europe in 1815, following the path of Napoleon’s retreating soldiers and the Cossacks who chased them, wrote about seeing the blood drain from women’s faces when the Cossacks were mentioned. The French had been the invaders, and yet it was the Cossacks whom the women feared and hated. “The cruelties, and barbarities, of the Cossacks, seemed to have white washed all other crimes from their minds.” Over hundreds of years, the Cossacks fought Muslims as if it were a birthright. They murdered Jews with indiscriminate ferocity. The pogroms continued until the Russian Revolution. The Cossacks also took part in enforcing the Russian military’s expulsion and eradication of the Circassians from the region, in which hundreds of thousands, and possibly more, died.

10. Most of the Cossacks fought on the side of the White Russians during the civil war. When the Bolsheviks won, it became dangerous to be a Cossack. Many were killed and tens of thousands deported. “There was no legitimate way to express a Cossack identity during the second half of the 20th century,” said Brian Boeck, a Russian historian at DePaul University.

Since the fall of the Soviet Union, the Cossack way of life has begun to revive. After spasms of violence from the group’s more extremist elements in the early ’90s, much of the resurgence has centered on local cultures of dress, music, and dance. But in the past several years, and especially since Putin’s return to the presidency, the Cossacks have assumed a larger, semi-state-sponsored, semi-vigilante role in law enforcement. The Cossacks are associated with ultranationalism and a xenophobic strain of Russian identity.

“The feeling is, ‘Everything’s fallen apart and we need order,’” Eric Lohr, a professor of Russian history at American University, told me. “These are some of the same forces that swept in Putin.” 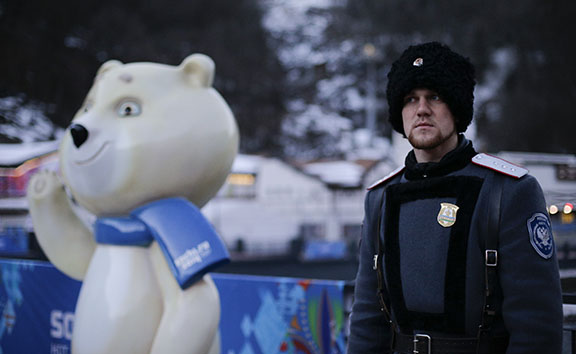 11. More than 700,000 migrants came into the Krasnodar region in 2012, according to the Financial Times — and that number was estimated to rise by 25 percent in 2013. Human Rights Watch has documented widespread abuses of the migrant workers who came to build Olympic stadiums.

12. In 2012, the governor of Krasnodar Krai, Aleksandr Tkachev, announced that 1,000 Cossacks would be paid by the government to maintain public order. The influx of Muslims into the region was getting out of hand, he told law enforcement officers. “We have no other way — we shall stamp it out, instill order; we shall demand paperwork and enforce migration policies,” Tkachev told law enforcement officers during his announcement of the Cossack patrols.

“What you can’t do, the Cossacks can.”

13. Antiaircraft batteries are in the hills, countless surveillance cameras on the walls, warships off the coasts, X-rays at the checkpoints, policemen and soldiers on the streets. There are bomb-sniffers on leashes, machine guns in hands, wire around perimeters. There is an eavesdropping system everywhere, a Big Brother called SORM. Among the estimated 50,000 law enforcement officials will be around 400 Cossacks.

The Cossacks are at the Olympics to look like Cossacks. They have funny hats, tall shrubs of black sheep’s wool. Some of them wear gray greatcoats with stiff epaulets and jodhpurs that hang loose around their thighs. They are living anachronisms; they look good in photographs. They are not, says the historian Brian Boeck, there to remind people of pogroms. “The people who are making those decisions have an alternate memory of the past, in which the imperial moment is something to be proud of,” Boeck explained.

Still, they are meant to be menacing. They are there to make people feel their threat.

15. There will be a little real snow — and enough man-made stuff to ski on. The Olympic cluster will be completed on time, at least enough for the cameras. There probably won’t be traffic jams, since, due to security concerns, only registered cars have been allowed in Sochi for a month.

16. For Putin, the Olympics are a point of personal pride. Russia has a strong Olympic tradition, but this will be the first Winter Olympics held on Russian soil. Russia has hosted the Summer Olympics only once, in 1980 in Moscow, and the United States boycotted those Games.

Athletes come to the Olympics to compete with other athletes. They play sports — they play games. But the Olympics are not just about sports and games. The Olympics have always been a theater, a stage for dramas with competing scripts. The Olympics are a substitute for war and its analogue, a realization of both the cooperation and competition among nations. They are a celebration of peace. They are a test of power.

The Cossacks are patrolling the grounds and standing guard at venues, but they are playing a largely symbolic role. What that symbol is, and whom it’s directed at, and why they’re there at all are questions without clear answers. They are a symbol of freedom and rugged individuality, but also czarism. Their history is one of astounding violence, but they’re in Sochi unarmed. If there is a terrorist attack in Sochi, it’s hard to imagine what role a few hundred men wearing jodhpurs and not carrying guns can play. Still, they carry with them the suggestion of fear.

It’s an ironclad tenet of the IOC that politics has no part in the Olympic Games. But politics is the negotiation of power, and this Olympics, more than any other, is about power. A ski jump is a construction project. A hockey rink is a question of national honor. A security guard is a Cossack.