The downhill is the only Olympic alpine race with practice runs on the actual course. The practice runs help keep the racers from dying. In the other alpine events, skiers have an hour to inspect the bumps and rollers from the side and to chart their line through the gates in their heads. The downhill, though, is so difficult and dangerous that racers get a chance to judge for themselves where to start their turns and how to weight their skis, to know just how fast and far their tucked bodies will fly when they hit jumps traveling faster than the speed limit on any interstate. Calculating just when to put more weight on the outside ski could mean not only the difference between a silver medal or 16th place, but also the difference between finishing at all or cartwheeling through a fence with only Lycra and a lollipop-like helmet for protection.

Rosa Khutor, the mountain outside Sochi, is a hungry god. Ten of the 55 skiers who participated in the final training run on Saturday didn’t complete the course. One of them, Rok Perko of Slovenia, smashed his face and left blood on the snow. “If you’re not paying attention,” said Bode Miller, “this course will kill you.”

Which is how Bode Miller likes it — fast and hard and mean. He skis like a hellion. Miller grew up in New Hampshire, skiing on carapaces of ice cut through the forests. Rosa Khutor is his kind of mountain. He is famous for his instincts, his feel for the snow, his balance, and his adjustments. On his training runs, he tested his limits as much as his edges. (You can watch replays of the training runs on NBCOlympics.com.) When Miller’s body folded against the slope, his skis almost perpendicular to the snow, you could see the muscles straining across his back. He posted the fastest time on two of the three training runs. It wasn’t only his high speeds that caught people’s attention. It was his daring. It was his comfort, his precision, and his courage, his willingness to throw himself down and drive.

Bode Miller is the best American skier of his generation, but also one of the most infuriating. He’s known as a maverick, someone willing to try anything for a few extra hundredths of a second — or for more fun. His background has become the stuff of legend: his unusual upbringing (he grew up in a cabin without electricity), his unorthodox style, his incredible touch, balance, and versatility. He has five Olympic medals — but he should have more. He spent the Turin Olympics partying and didn’t win one.

Miller missed last season while recovering from knee surgery, but lately he’s been showing his old fantastic form. Everyone was talking about Bode Miller all week. By the time the official race was about to begin on Sunday, he was clearly the man to beat. On Saturday, in his final training run, he set the course record. His time was 2:06.09. Other skiers used words like “epic” to describe the way he’d skied. The leader of the World Cup downhill standings, Aksel Lund Svindal, said Miller had been “the best skier on this mountain.” After his final training run, Miller said he had only meant to work on one transition and was focused on staying on his feet. But once he’d taken the hard turns at the top, he couldn’t restrain himself. “It’s a pleasure for me to ski on this track,” Miller said afterward. “I would be angry with myself if I had wasted this opportunity to properly run on this track.”

The other skiers treated their training runs like training. They eased off, held back, or wiped out. Several skiers skied the top and then simply skied off the course. Some of them had a little fun. Austrian Max Franz came off the jump called the Russian Trampoline, reached down, and held his ski, a trick called a mute grab. It was, after all, only practice. Franz said he thought, “Why not?”

I watched the replay of Miller’s training runs feeling giddy. It did not occur to me while I watched — as it seemed not to occur to him while he skied — that the training runs didn’t count for anything.

Afterward, I tried to tell myself that Bode’s fantastic training runs didn’t mean a thing. Really, I did try.

This story should probably be about Matthias Mayer. He is the Olympic champion; he deserves the attention. The result was and wasn’t a surprise. He is only 23 and had never finished higher than fifth in a World Cup downhill. Still, he won the second training run, the one Miller didn’t, and had been in top form all week. On Sunday, race day, he finished with a time of 2:06.23.

After a scrubby top section, Mayer’s run was impressive. He soared off the Russian Trampoline in a tight tuck, landed cleanly, balanced his weight properly, and kept the line he wanted through the tough middle section, known as Big Pan. From there he skied the kind of clean race that requires some imagination to appreciate.

Downhill skiing is hard to watch live, but it’s not so easy to grasp just how incredible it is on TV, either. The cameras can’t communicate the way a course drops and swings, or the skiers’ unbelievable speeds — upward of 80 mph. How fast is that? In Virginia, a driver traveling faster than 80 mph wouldn’t get a speeding ticket; she’d be charged with reckless driving, a misdemeanor criminal offense.

Mayer was clean and fast through the middle section, shifting smoothly as he carved curves over the uneven, pitched terrain. He handled the little pitches and bumps that can mean the difference of a few hundredths of a second with quiet movements. He skied with almost deceptive efficiency.

Miller followed only a few racers later. At the start he skied fast and free and a little insanely. Even some of his obvious mistakes — when his right arm swung back or when his balance swayed off his ski — made him seem more charismatic.

At the first split, Miller was leading by 0.27 — a big margin. But after the Russian Trampoline, he took a line that plowed through a gate, losing speed where he needed to accelerate, just before an incline. Where Mayer had been controlled, Miller started to get bumped around, twitching in reaction instead of setting up in anticipation. The sun had disappeared, and the flat light worked against his strengths. Miller skis by feel and read; he spent less than seven minutes inspecting the course. The conditions had changed even in the short time since Mayer’s run. The snow had softened slightly as the day had warmed. Unable to see the terrain’s unevenness, Miller was struggling to adjust to the section’s variations. His turns grew wider and his skis a little wild. Miller’s errors compounded and his corrections slowed him. When he came off the Lake Jump, which the skiers hit blind, his legs kicked out to the left. For a moment it seemed he’d lose control and crash. Somehow, with some impossible strength and air sense, he pulled his skis back under him and smoothly hit the snow. He finished eighth. 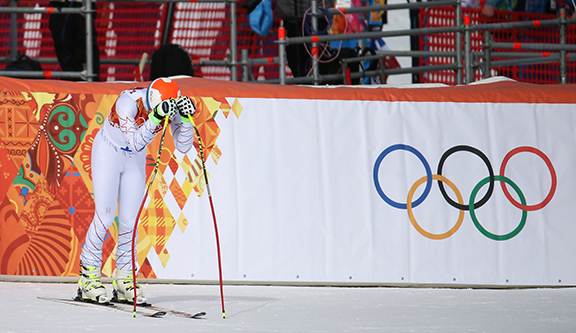 Miller was crushed but defiant. The problem wasn’t with his line, he said. It wasn’t his tactics. It was the weather. “The training runs were bluebird — perfect visibility and hard snow,” Miller said after his race. “That’s the perfect conditions to see who the best racer is.”

Right, the best racer. The one who won two training runs, not one, presumably. The one who skied the course in 2:06.09, not 2:06.23. The eighth-place finisher, not the Olympic champion. Bode Miller, not Matthias Mayer.

The thing you’ve always heard about Bode Miller — his charm and his flaw — is that he treats the Olympic Games like he treats his life, and he treats his life like it’s a game. Sochi, though, is supposed to be different. It is probably his last Olympics. At 36, he is said to have new “maturity.” He had surgery to repair his knee; he lost weight. He suffered personal turmoil. After a year away from the racing circuit, he returned dedicated. He has a sense now, it’s said, of what’s at stake. He skis for medals and not for speed, for the result and not the fun. “Bode wanted it,” Sasha Rearick, the Unites States men’s alpine head coach, said after the downhill. “He wanted it too much.”

Maybe you can point to Miller’s newfound commitment, his wanting-it-too-much, to explain why he was kind of an asshole after the race on Sunday — blaming the weather, making excuses. Or maybe this is the way he copes with disappointment: He convinces himself his failure is outside his control. Or maybe you can’t excuse it; maybe he’s just kind of an asshole.

The thing is, I’ve already almost forgotten what Mayer’s fine run was like. What I’ll remember instead was the long course, 2.2 miles of icy vertical drops slung along the side of a mountain.

And I’ll remember the way Bode skied it in his training runs — when the results didn’t count. There are no medals for practice. If anything, Miller helped his opponents by giving them something to study. But it was a pleasure to watch Bode Miller ski on that track.

The downhill is very simple. There is a mountain, a course, and a clock. Top to bottom, as fast as possible. Try not to crash.