Come in From the Cold

The Curious Case of Jim Harbaugh 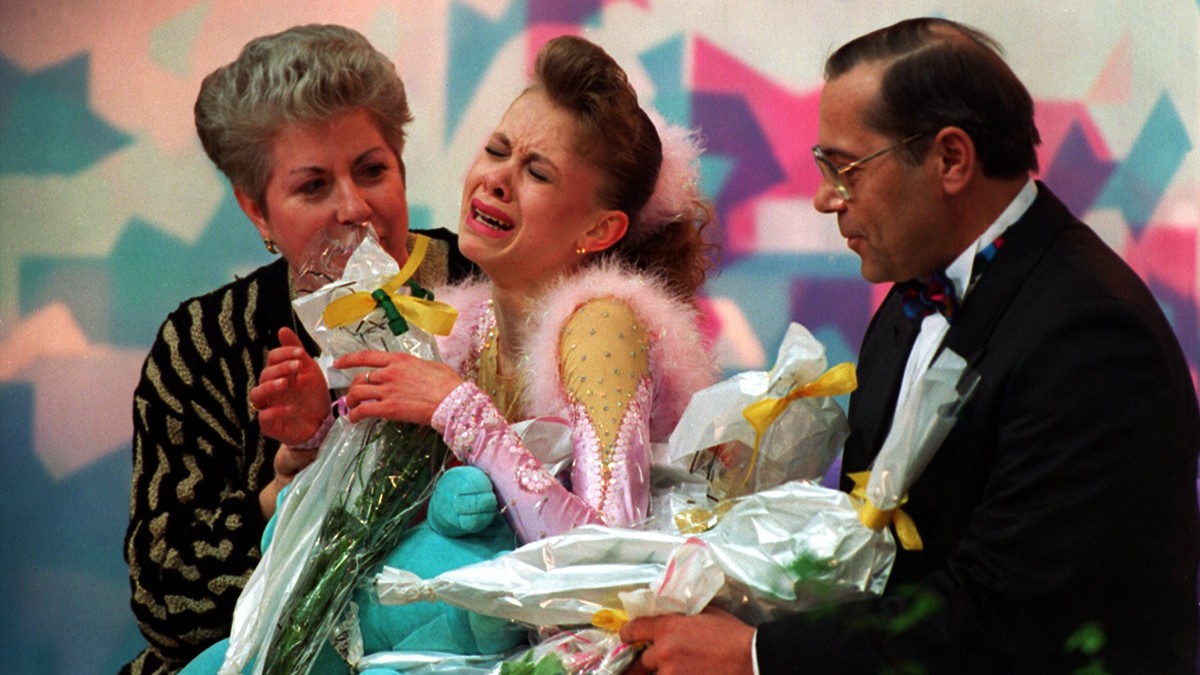 Back then, their names weren’t Julia Lipnitskaia, Sidney Crosby, and Ireen Wust. Instead, they were Oksana Baiul, Peter Forsberg, and Johann Olav Koss. I suppose I was different back then, too. I was 12 years old. Still a child, though barely.

I’d cared before 1994. I came into those Winter Olympics ready to care, having trained really, really hard in caring. There was a blue plastic Lillehammer Swatch watch on my wrist. Previews from the Washington Post and Sports Illustrated were already clipped and labeled. I could tell you Paul Kariya’s stats as a freshman for Maine (25 goals and 75 assists) and what speedskater Bonnie Blair ate before races (a PB&J sandwich). I knew my triple lutzes from my triple loops. I had a stack of blank VHS tapes and the VCR programmed. I knew what to watch for.

I thought about the Lillehammer Olympics a lot while watching the Games in Sochi. Maybe because of all the Tonya and Nancy anniversary coverage, or because I’m looking for excuses to feel old. Maybe because there have been some strange echoes, little resonances warped by the long curve of time. Or maybe because some memories you just carry with you.

When I think about Lillehammer, what I remember is the feeling of seeing familiar things as if for the first time. The funny thing is, that’s how I felt watching Sochi, too.

It was good to be a Dutch speedskater during the Sochi Olympics. Maybe it’s always a good time to be a Dutch speedskater. The Netherlands finished with 23 medals in speedskating — while every other nation combined to win 13. Ireen Wust alone won five. Watching Dutch skater after Dutch skater made the races seem — as if it were possible — even more hypnotic. Speedskaters are metronomes, swaying and steady, their rhythms punctuated by their skates’ soft scrapes and claps. You’d fall asleep watching the longer distances if the skaters weren’t so mesmerizing.

As Wust glided around and around the oval, fast and frictionless, I moved in and out of a semi-trance. Just before my eyes was the suggestion of a bright red blur, the ghost of Johann Olav Koss. He was Norwegian, not Dutch — but he was so good that the Netherlands awarded him a golden butterfly, which they normally give only to their own gold medalists. That’s how much he was admired.

My god, dominance can be beautiful. Coming into Lillehammer, Koss was already a champion, already a demigod in Norway. But what he did at those Games made everyone forget everything, including the high level of his former greatness. Three gold medals, three world records. In the 10,000 meters, he broke his own world record by 12.99 seconds and won the race by 18.70 seconds — which, in speedskating, is basically the length of an Olympiad.

I was as impressed as the Dutch. I also gave him the highest compliment I could: imitation at the high risk of embarrassment. I would go to the rink and nonchalantly grasp my hands behind my back, as if just going for a little skate, a little stroll. By degrees I’d bend forward at the waist, lengthening my stride, deepening my push. Before long I’d forget people were looking. On the curves, as I moved into crossovers, I’d drop an arm and let it swing.

Koss donated his prize money to Olympic Aid, and that made a big impression on me, too. He seemed to represent everything the Olympics were supposed to stand for. He told stories about kids in Eritrea who turned their shirts into soccer balls, and young skaters in Sarajevo trapped in bunkers. After the Olympics, he turned Olympic Aid into an organization called Right to Play, which helps strengthen kids and communities through sports. He has won the Jesse Owens Award, the Jackie Robinson Humanitarian Award, and the Child Survival Award from Atlanta’s Carter Center — to name only a few honors. On its 50th anniversary, UNICEF gave him a special award. You can forget about the gold medals.

Or you can try. But I can’t. Because that’s where it started for me: the sight of him, arms swinging, out in front. 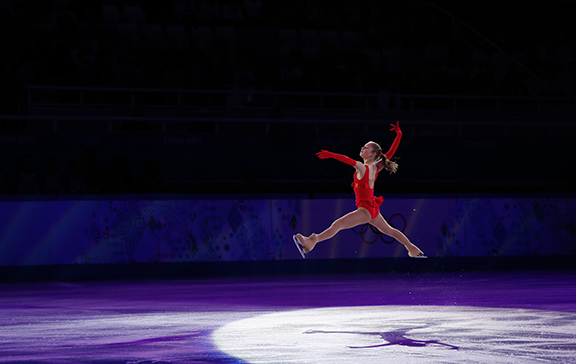 Maybe Julia Lipnitskaia was lucky to fall. Maybe it was better that the 15-year-old Russian who thrilled everyone with her performance in the free skate and then faltered during the women’s (excuse me, ladies’) competition did not win. She is so young. There’s no way to overlook her age. It’s stamped on her full cheeks, her narrow body. When she’s skating, when her age seems not to matter, it’s still there. She is poised, but her pliancy is what makes her so astonishing. It’s like her bones have not yet fully formed.

How would winning have changed her? Maybe not at all. No one can live their own counterfactual. There was a former 15-year-old Olympic champion commentating when Lipnitskaia skated. Tara Lipinski’s quick, intelligent wit was proof enough that some child winners thrive. But my mind was on another 15-year-old, for whom things have not turned out so well.

I wonder whether the 70 million people in the U.S. who turned on the TV to watch the women’s figure skating short program in the 1994 Olympics remember what they watched. I know why they watched. They wanted to see Nancy vs. Tonya, the concluding episode of the first real reality TV show. But Nancy vs. Tonya isn’t all they saw.

What they saw was another teenage girl, really, a child. Oksana Baiul was only a few years older than I was. During the short program, she was dressed as Tchaikovsky’s black swan, though her stiff black dress gave her the luxuriant glossiness of a raven. You knew she was a bird. You would have known she was a bird even if you had not known the music, even if she hadn’t worn feathers. She was a bird because when she skated, she was hollow-boned. There were footwork sequences in which her feet did not quite seem to touch the ice. She perfectly mimicked a bird’s coy hesitations. Her hyperflexible joints turned her arms into wings. She was half ingenue, half beast. And a few days later, after a flawed but frothy and gutsy long program, she was Olympic champion. The judges awarded her the title over Nancy Kerrigan by the smallest of margins.

Her father had left when she was a child; her mother had died three years before. She had been plucked up by Viktor Petrenko, a Ukrainian who had won the 1992 Olympic gold, and brought to train and live with his coach, Galina Zmievskaya. Soon after the Olympics, they all moved to Connecticut to train. Baiul started touring, appeared in ice shows. She wrote a children’s book about her life and called it “a fairy tale.” She appeared in a TV-movie version of her story. It was called A Promise Kept.

In 1997, she crashed her car into a tree while driving nearly 100 mph after drinking “four or five” Long Island iced teas. Her blood-alcohol level was measured at .168. She went on Oprah to apologize — but denied being drunk. “You had to be drunk if you had four Long Island iced teas,” said Oprah. “I’m Russian,” replied Baiul, who is Ukrainian. A year later, at the age of 20, she was in rehab.

In the past couple of years, she has filed a few lawsuits. The biggest came in October. It names 24 defendants, including former agents, accountants, and associates — along with Petrenko, who had been her benefactor, and Zmievskaya, her Olympic coach. The charges include money laundering, wire fraud, and outright theft. The numbers of the damages claimed are gaudy: $56 million; $41 million; $15.08 million … but I’ll leave the lawsuits to the lawyers. What struck me as I read the complaint is that I became more sympathetic to her, not less. Whatever else has happened to Baiul, it’s clear something or someone has tapped into her fear of abandonment, her sense of being exploited, her rage. She’s now taking her past, her fairy tale, and setting it on fire.

Was winning the gold worth it? No one but her can say. A few days ago, she released a statement on the 20th anniversary of her securing the Olympic title. She wrote about how she had to “sacrifice everything … including my childhood” to win. But skating was her “way to express myself and feel needed in this world after the loss of my mother.” What she needed was what a child needs — to feel needed. An Olympic gold medal didn’t determine her life. Her life determined her life.

My astonishment was so familiar and so new. That’s the thing about sports. Sometimes athletes do things that seem to wrench time from its hinges. I guess this is what we talk about when we talk about transcendence, but it’s not quite that either. Watch Lipnitskaia spin. Without moving sideways, forward, or backward, she changes form and gains speed. It’s amazing. 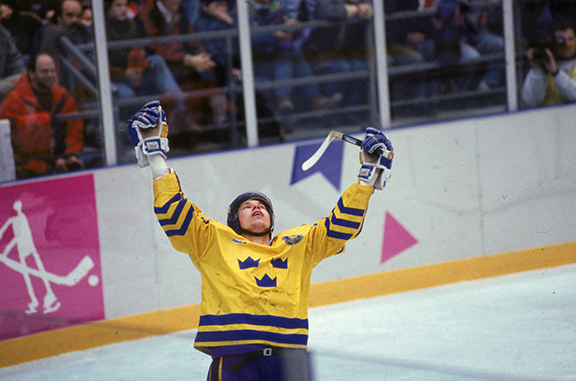 Go USA! But forgive me — the sight of yellow sweaters against red made me cheer. Canada against Sweden, with a gold medal at stake, again.

By the time the final game started 20 years ago, Peter Forsberg was already my favorite player. There was something about him that was so quietly solid, so immovable, so great. No one could dislodge him from the puck. He had gentle hands and a way of seeing the ice that was special. You couldn’t see what he saw — you could just see him see it. His team was so fast, so dynamic, and it moved through him.

I had my first violin lesson on the morning of the gold-medal game. My dad was supposed to take me. Instead, we watched. We saw a breathless comeback to tie it by Sweden at the end; we stayed through overtime. We kept watching, because the game went on. The shootout turned sudden death, and Peter Forsberg was up. He shrugged his shoulders, pumped his arms, and began to skate fast. He picked up the puck at center ice and began to fly, darting right, then cutting left at the last second, putting the puck on his backhand and pulling it around the sprawling goalie with one hand. I don’t know where I was or what I was screaming when it happened, whether I was standing on the floor or on the couch. I was there but not there; I was ecstatic.

I never played the violin.

The girls at school cultivated personal obsessions. Marianne was into horses; Rachel liked The X-Files; Mieke drew elaborate Guns N’ Roses insignia and used a ballpoint pen to tattoo Axl’s name on her arm. Mine was a Swedish hockey player.

Yesterday I smiled when I saw Sidney Crosby race down the ice, put the puck on the backhand, and sweep it in past the sprawling goalie. Wrong team, but no matter. The Kid isn’t really a kid anymore, and he’ll be better remembered for the last Olympics than for this. But he still has that way of showing you something you’ve seen before — something you’ve seen Crosby do before — and making you think you’ve never seen a goal scored before.

Every four years, the Olympics repeats itself — only at a slant. The great Björn Daehlie, Norwegian cross-country skier, becomes the great Ole Einar Bjoerndalen, Norwegian biathlete. Sweden wins gold, Canada silver, Finland bronze; and then Canada wins gold, Sweden silver, Finland bronze. And so on. The 15-year-olds flit across the ice. The speedskaters glide, one after another, around the track. Immortality is a short-lived thing.