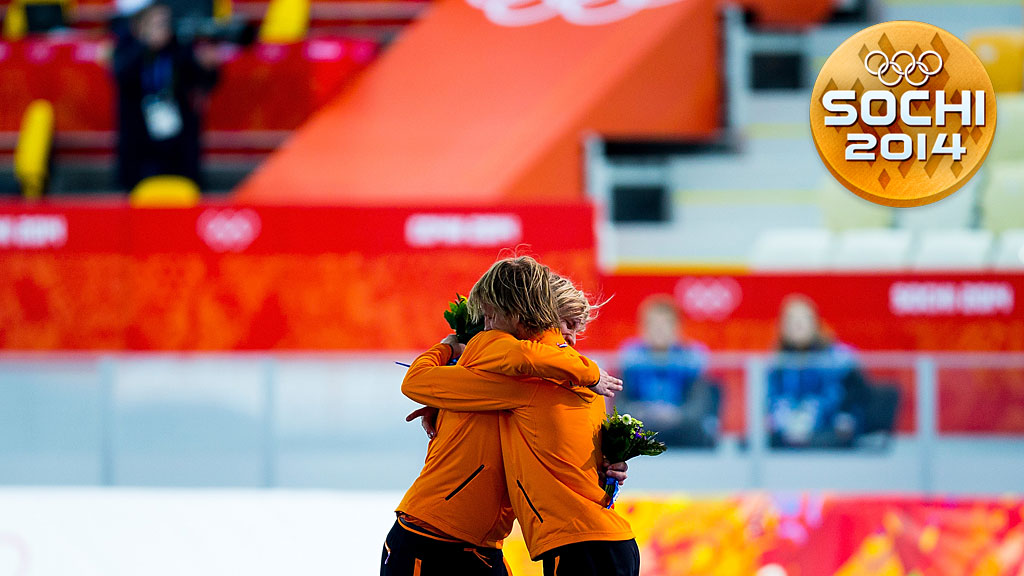 In my next life, I want to come back as Dutch, I thought last night as orange and silver confetti fluttered down from the ceiling and caught in my hair. All around me, men and women — most of them really tall and strapping and perfectly coiffed — were bouncing up and down in ridiculous orange getups.

There were shiny suits, clownish wigs, flower-sprouting hats that wouldn’t look out of place at the Kentucky Derby on Halloween, and even what appeared to be fishing waders. Up onstage, three speedskaters, two of them shaggy blond twins and the other with the world’s rosiest cheeks, stood celebrating their medal sweep in men’s 500-meter long track speedskating. When I asked for directions to the Holland Heineken House, I was told, “Just look for the orange lights and the orange people.” That had been a grave understatement.

Go to any speedskating race and you’ll see them: the happy hordes of fans from the Netherlands who have come to support their athletes in their nation’s most dominant sport. (Well, they’re not always happy — when things don’t go their way, which is rare, the outrage can be unparalleled.) They carry HUP HOLLAND HUP banners and bells; they have their own band, called Kleintje Pils, which means “a little bit of beer.” And at the end of the night, they flock to the Holland Heineken House — in most cases, to celebrate another win.

Located on the grounds of a resort complex just outside Olympic Park, the HHH — which has indoor and outdoor bars, a dance hall, and a selection of sausages and burgers — has evolved since its beginnings as, basically, a glorified beer tent during the 1992 Barcelona Games. (It was on a boat in Sydney, and in London it accommodated up to 6,000 people.)

It can be a hot ticket: As I entered, several disappointed folks who had been turned away at the door told me to not bother trying. One night earlier, both Russian president Vladimir Putin and Dutch monarch Willem-Alexander had swung by. Putin stayed only about 20 minutes, but he had a beer and hugged Ireen Wust, who handily won gold in the women’s 3,000-meter event. “I got a cuddle from him,” said Wust, one of seven openly gay athletes at the Games.

At the Winter Olympics, the house might as well double as a museum. The Dutch command of speedskating is so complete that, as I write this, the Netherlands stand third in the overall medal count with eight, all of which have been won in the sport. And their love for the sport is just as strong: The mother of Michel and Ronald Mulder, the twins who won gold and bronze in the men’s 500 meter, even pushed back her induced labor by a day when she was pregnant with them because her originally scheduled event conflicted with the Elfstedentocht, a treasured but rare speedskating event in the north Netherlands.

In the Elfstedentocht, which translates to “Eleven Cities Tour,” skaters navigate a series of frozen waterways to travel nearly 124 miles. The event can take place only under pristine conditions — the stars haven’t aligned since 1997 — and it harks back to the Netherlands’ long history with the sport. People have been skating around the region’s interconnected canals for not just decades, but centuries. There are 16th-century paintings from that part of the world that show people cruising around on what look like blades.

Here’s what typically happens when a Dutch speedskater wins a medal: They come by the house later that night and are showered with love and national pride during a “medal ceremony” inside the dance hall. On the floor, there’s a path called “Legendary Lane” which leads up to the stage, and dozens of employees in white Heineken polo shirts suddenly materialize and hold hands to make a human barricade on each side of the path.

In comes the medalist, to frenzied applause, as a special song — also called “Legendary Lane” — pumps and confetti releases and neon orange lights flash and numerous phones and iPads held aloft capture the fabulous scene. (The song, by the way, is really, really catchy; it’s still in my head.) The victor gets up onstage and is interviewed by a Guy Smiley–looking Dutch fellow, and afterward, he or she gets whisked away to another part of the house to appear on what is basically the Netherlands’ version of NBC. (In Vancouver, gold medalist Mark Tuitert got up and played the guitar during his fete.) Last night, this scene was repeated three times, one for each medalist. I felt bad for the Heineken crowd-control people who had to hold hands for that long — what if you’re someone afflicted by sweaty palms?

Truth be told, I had found the long-track event — which was dominated by the Mulder twins and fellow countryman Jan Smeekens, who took silver — earlier that day to be … an eensy bit dull? The races and the athletes were a marvel to watch, sure — those haunches put hockey players to shame —and I couldn’t get over the size of the track and the building in which it is housed, which had an awesome Olympic feel. People had taped up flags on the walls behind them, and around the arena there was solid representation from the Netherlands, Japan, Finland, and (of course) Russia.

Knowing very little (OK, OK … nothing) about the rules, I initially assumed the pairs of skaters were racing against one another and that there’d be some head-to-head gold-medal race, but that wasn’t the case — they were just trying to get the fastest overall times. There were 40 races, each one a lap around the rink, and after a while, everything began blurring together. The ending was thrilling, sure, as the Dutch fans and skaters and coach all came to the giddy realization they’d earned a sweep, but the high drama, to my eye, wasn’t there. I’m just not enough of a connoisseur.

Of course, I’d also been spoiled: Earlier in the day I’d taken in my first live short-track event, which could not have been more the opposite. Short track takes place on the same little rink that holds figure skating — it takes five laps to get to 500 meters, as opposed to one — and involves jostling and angling and major wipeouts. In 2002, one gold-medal race famously ended when the leading men wiped out just short of the finish line, leaving a shocked and psyched Steve Bradbury from Australia to glide in for a gold. You can spend your whole life training for the Olympics only to have it all end because some other dude next to you couldn’t maintain an edge.

Some speedskating purists can’t stand it. “Long track is more of a symphony … short track is like metal rock,” as Eddy Alvarez told the L.A. Times. My ESPN.com colleague Jim Caple is not a fan. I could have sat and watched races all day. The relay, in particular, is a mob of humanity skating around seemingly at random; when a new person subs in, the last skater gets them going with a helpful shove in the ass. It’s so great.

While at short track, I turned around and sitting behind me was Zdeno Chara, taking pictures on his cell phone and enjoying the scene. He seemed pretty into it. Note to the Holland Heineken House: Invite this guy to stop by. He may be the only person at the Olympics taller than the majority of those lucky, crazy Dutch fans.

The Sixers Are Tanking Artists, and the Last 48 Hours Have Been a Masterpiece