Skin in the Game

Can Orlando Conjure a Superstar? 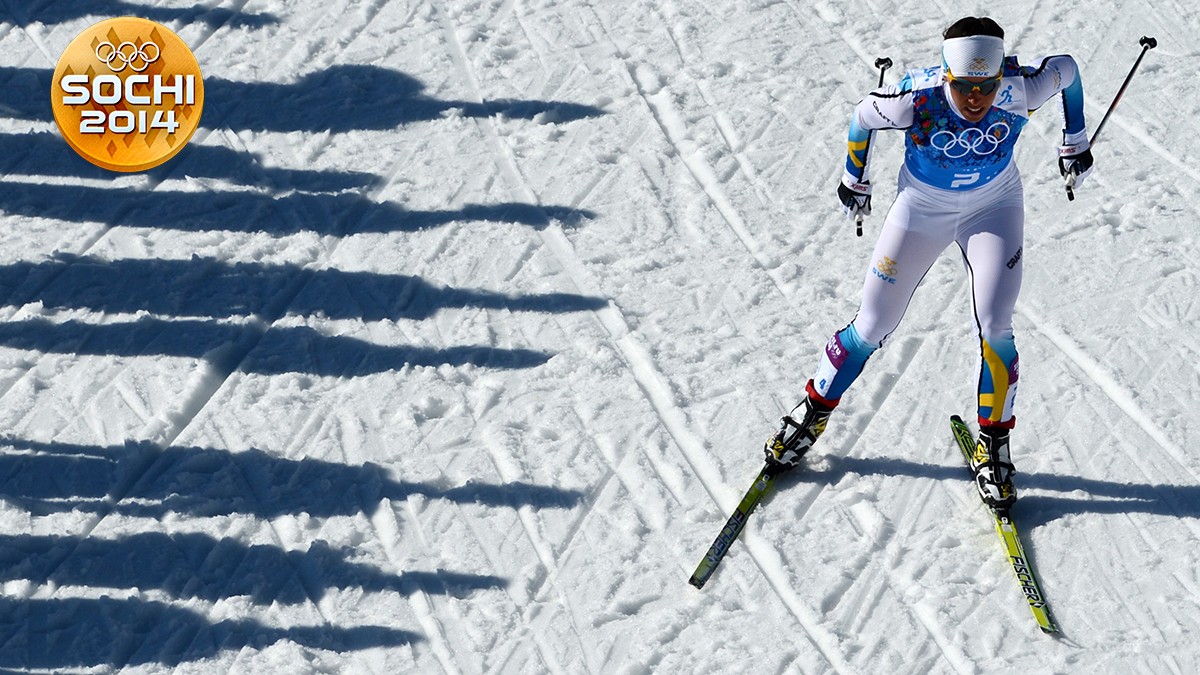 I am alone in this, it appears. I’m in the woods. I look for birds, but the birds are gone. I listen to snow, but the snow is silent. I talk to curls of leaves on the birch trees, but the leaves are dead. I’m starting to think I’m crazy, or Norwegian. There are inch-long icicles dangling from my hair. My frozen thumbs have been replaced by a sensation of hazy fire. My chest, it hurts.

“Cross-country skiing is the best Olympic sport,” I whisper to nothing, and nothing responds.

I stare at the brambles with mournful eyes. “Did you see Charlotte Kalla’s performance in the 4×5-kilometer team relay?” my mournful eyes ask. A rhetorical question. The brambles are stupid.

My god, what they missed! Kalla had begun the last leg for Sweden 25.7 seconds behind the two leaders, Finland and Germany. What was more, Marit Bjoergen, one of the greatest cross-country skiers of all time, who was anchoring a team that had not lost a World Cup really since before the last Winter Olympics, was not far behind. Quickly, Kalla cut the time between herself and the leaders nearly in half. And then the race seemed less like a race than a hunt. It was … how do I put this without exaggerating? It wasn’t merely suspenseful. It was terrifying. It was a person stalking a person with animal instinct and animal speed. The leaders would round a bend into the woods, or slip over the crest of a hill, and then she would appear. They would crest a hill as she would start to climb it. By the time they were entering the final hills and turns, she was within sight. With 500 meters left, she reached them. By then, she seemed inevitable. She drove her way inside the final turn, forcing a line past the Finnish skier, Krista Lahteenmaki, where there had been no gap.

Bjoergen had skied the 5K in 12:10.4, the fastest leg of the day — two minutes faster than some of the world’s best skiers. Overall, the race had taken nearly an hour. And this is how close it was: The skier from Finland crossed the line 0.5 seconds after Kalla — five-tenths of a second! Germany was only 0.9 seconds behind.

In the finish area, each of the skiers collapsed to the ground.

This is the one thing even the brambles probably knew about cross-country skiing: It ends in carnage. Bodies splayed across the finish area, heaving, gasping, panting. The skiers are sprawled on the snow because they cannot stand. Their bodies will not support them. Sometimes they have to rely on adrenaline just to get across the line. With lactic acid flooding her muscles 200 meters before the finish line, the anchor of the Finnish team, Lahteenmaki, told FasterSkier.com afterward, “I thought I would fall down.”

They are some of the toughest athletes at the Olympics. Poland’s Justyna Kowalczyk won a gold medal on a broken foot. Switzerland’s Dario Cologna won two gold medals less than three months after having surgery that banded his tibia and fibula together. Marit Bjoergen won the skiathlon just over a year after being hospitalized with an irregular heartbeat.

They ski at speeds I associate with cars. As the inclines change, they switch techniques intuitively, changing their stride and the timing and rhythm of their poling. Watching them do it in a pack can be haunting, like watching a flock of birds abruptly turn. Like short-track speedskaters, they crash and take each other down. There is no moment when nothing is happening.

Some of them are among the best athletes at the Olympics. Some of them have scored better on maximal aerobic capacity tests than Lance Armstrong. (And yes, cross-country skiing has doping problems.) Their resting heart rates have been measured in the 20s. But they aren’t just aerobic phenoms. Their sport challenges their anaerobic capacities as well — both in single races and across distances. There are specialists, but many of the best racers are versatile. Imagine a cross between the great marathoner Wilson Kipsang and Usain Bolt. They contend for medals in the sprints of 1.4K, racing wave after wave, the middle distances, and the marathons. For the men, that means 31 miles. (The IOC, ever mindful of the delicacy of ladies, keeps the women’s marathon to 30K, or only 18.6 miles.)

What really makes cross-country skiing the best Olympic sport is that it not only features some of the best Olympic athletes, but also some of the worst. According to a complex system of quota allotment, every country can have at least one competitor in the sprint event or the 10K classical (for women) or 15K classical (for men), as long as he or she qualifies by earning enough points at International Ski Federation–sanctioned races. There are a lot of small sanctioned races.

So finishing in 73rd place in the women’s 10K classic, more than 14 minutes behind the winner, was Farzaneh Rezasoltani, a teacher from Iran who started skiing in 2008 after seeing it on television.

And in 68th was Mathilde Amivi Petitjean, who was born in Togo but grew up in France, where she learned to ski. Last year, she got a Facebook message asking if she was interested in representing Togo at the Olympics. She said yes.

In the men’s 15K classical, Dachhiri Sherpa, a 44-year-old skier from Nepal, finished in 86th place. This is Sherpa’s third Olympic Games. He was a runner before he was a skier, and before that he was a cook for trekking expeditions. He now runs Dawa Sherpa Races, a series of mountain races that raises money for humanitarian projects in Nepal. “I think there is a very big chance I will finish last,” he said before the race. “The placing is not important if I can teach young people in Nepal about the Olympic spirit. This spirit is in my heart.” 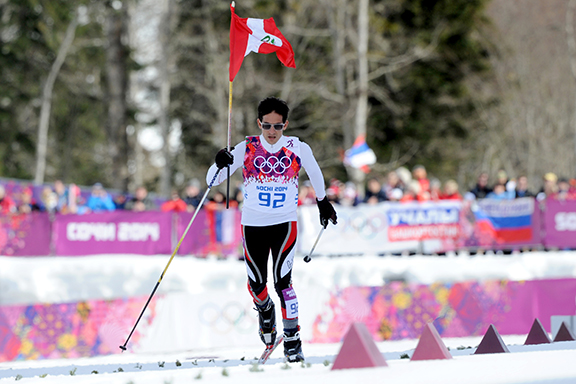 In fact, Sherpa finished second-to-last. The man who finished last was Roberto Carcelen. Four years ago, in the Vancouver Games, Carcelen became the first man to represent Peru in the Winter Olympics. Carcelen lives in Seattle. According to a profile in the New York Times before Vancouver, Carcelen was taught how to Nordic ski by his wife, a manager at Microsoft he met on the Internet.

Carcelen recently broke a rib in training. No matter. He is a cross-country skier, after all. Long after the medalists had come in, long after even the stragglers were done, Carcelen was still on the course. The snow on that hot day, and after so many skiers had churned through it, was a slurry; it looked like it had a consistency somewhere between wet concrete and sludge.

Carcelen was wearing Wayfarer-style sunglasses and what appeared to be white long underwear. When he tucked going downhill, he didn’t curl like a Nordic skier but instead adopted the pose of an old-school downhill racer, the pose of Jean-Claude Killy. Carcelen stumbled not infrequently. More than once, he stopped pretending to glide and started to walk. He looked as spent as anyone.

Cross-country skiers have a reputation for being loners, machines that generate pain and stoicism in equal measure, or that are too strange to distinguish between pleasure and pain. Their mothers say mean things about them. Their fathers teach them discipline by forcing them to pick stones out of the fields.

Carcelen kept going. The spectators were urging him on. When he came into the stadium, the sound was the same that had greeted the winner, Dario Cologna. Someone handed Carcelen the Peruvian flag. He lurched to the finish, crossing it in an hour and six minutes — nearly double the time it had taken Cologna. Carcelen didn’t fall at the finish. Sherpa was there, waiting to hug him. Cologna was there to congratulate him, too.

Pleasure is better than pain. But as I watched Carcelen trudge up a hill, I thought about how hard it can be, sometimes, to untwist feelings of suffering and feelings of joy. I thought about the first time I spent a day cross-country skiing, a few years ago. I’ve never been so exhausted in my life — and that was only a few minutes in. Before long, my body was inventing new muscles in order to make them sore. At some point, I lost a toenail.

We skied through forests, along ridges, around a snowfield where airplanes came in and took off. My heart was ramming my chest. I moved through the air and the air moved through me. I had that feeling you sometimes get when exertion becomes indistinguishable from elation, and elation from exhaustion — that feeling of being intimately connected to the world and radically alone. With every push, I wanted to stop, and I wanted never to stop.

The brambles may never understand. But the skiers do, the best and the worst. Just watch.