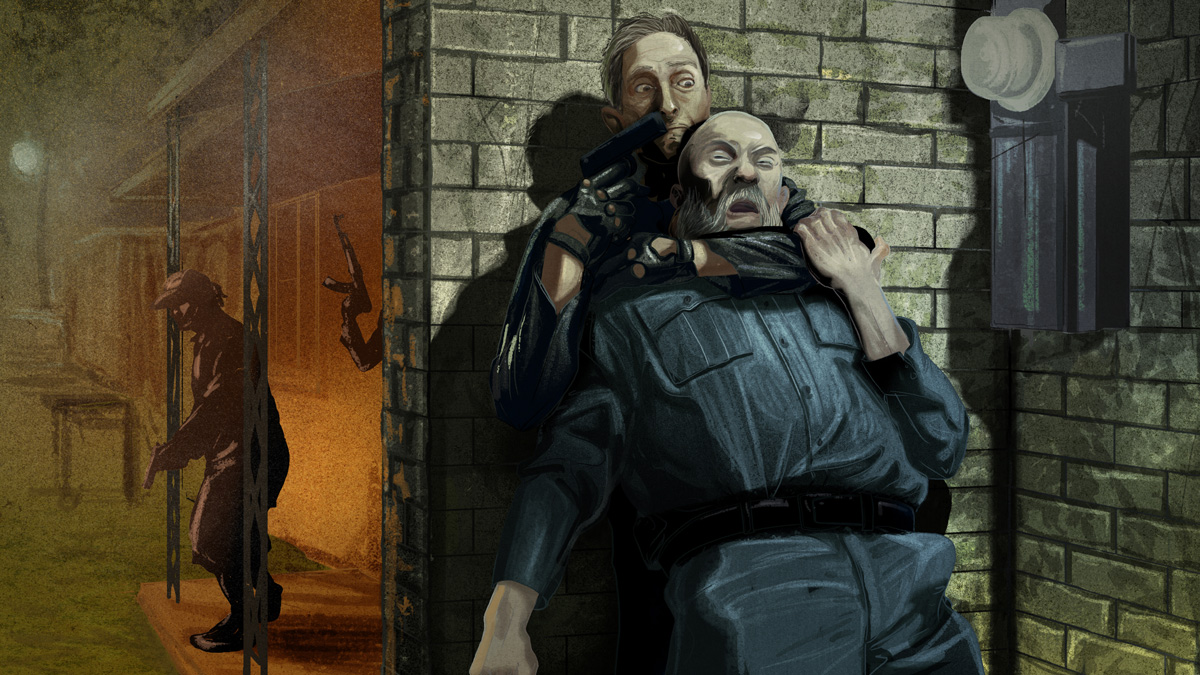 Sometimes you see something that feels like it was pulled straight from your imagination. It can almost feel invasive — like someone has aggregated all the things that interest you, that haunt you, that titillate you, that you celebrate or loathe about yourself and others, and put it onscreen. That was True Detective, for me. It had Camel Lights, drugs, and Lone Star; it had Wu-Tang Clan, Lucinda Williams, and Grinderman; it had undercover police work, criminal conspiracies, and the occult; it took place at the intersection of the real world and some kind of purgatory that resembled it. It was about the construction of alternative personal histories; it was about truth, fabrication, and self-delusion; and it asked: What is the right way to live, and would you live that way if you thought there was no punishment in this life, or reward in the next? These are all things that interest me.

And it had the shot.

There’s a scene toward the end of Visions of Light: The Art of Cinematography in which Michael Chapman talks about the work he did with Martin Scorsese on Raging Bull. He mentions Scorsese’s understanding of what “the storytelling of a shot is really going to be … all you need is this one shot, and it’s so good, and so evocative, and so powerful, emotionally, that it will get you from A to B without any coverage, without any worry.” Chapman is referring to this moment in Raging Bull:

After watching Visions when I was a teenager, I became acutely aware of how the visual aspects of a film impacted me. I was fascinated with lighting, framing, and camera movement — especially tracking shots; searching takes, from directors like Scorsese, Orson Welles, Max Ophüls, and Brian De Palma; Steadicam shots and crane shots. Whether filming the mundane or the action-packed frame, it didn’t matter.

Over the last 20 years, I have always found my eyes gravitating toward the lower corner of a screen when watching a movie. That’s where I first notice the camera moving. A tracking shot just feels so wonderfully cinematic, a unique element of the medium. If film is a hybrid of theater and photography, a tracking shot is something neither of those two art forms can replicate. Deployed judiciously, tracking shots can make you feel like you are experiencing some kind of heightened version of moving life. I like a lot of directors, but the ones I love tend to be able to move their cameras.

By the time the fourth episode of True Detective aired in mid-February, the series had built up momentum. It wasn’t just because of Rust Cohle’s ruminations on locked rooms, the art brut drawings on burned-out church walls, references to a yellow king, or Charlie Lange’s jailhouse rants about a place called Carcosa and the rich men who sacrificed women and children there. And people weren’t just tuning in for Woody Harrelson, Matthew McConaughey, or Michelle Monaghan. They were watching for Cary Joji Fukunaga.

I had liked Fukunaga’s previous efforts, Sin Nombre and Jane Eyre, and had even enjoyed his “Go Forth” campaign for Levi’s.1

He was obviously a talented filmmaker, but it didn’t seem like he was getting funded to do projects that had the scope to match his talent. That project was True Detective. Over the course of eight episodes, Fukunaga essentially rewrote the visual language of a televised cop show. Gone were the traditional establishing exterior shot of a police department, leading to an establishing shot of an office, a two-shot of the players, and a series of reaction shots between them as a conversation takes place. Here we had a director who seemed to take every frame, every movement, every bit of shadow, and every movement of the camera as seriously as the story. Take the first interrogation of Lange, by Cohle and Hart.

You have the basic framing of this two-shot of the detectives, with the cheap wooden wall in the background, that just-slightly inordinate amount of space above the pair’s heads, and a weird trick where Cohle seems farther back in the frame than Hart, even though they are sitting next to each other. Something is just a bit … off. And it should be. Notice how the camera pulls back, just a little bit, at the last second. Lange is about to tell them about his ex, Dora, the first victim we see on the show, and how she called him one night, babbling, high out of her mind, telling him that she had “met a king.”

No shot was “just a shot” for Fukunaga. His considered, flair-filled style was perfect for the material. Nic Pizzolatto’s writing has been criticized for its portrayal of women, its jerkoff philosophizing, and the fact that he at least heavily borrowed from Thomas Ligotti. But I still greatly admire it. True Detective reminded me of the poetry of Richard Hugo and the fiction of James Crumley, Larry Brown, Daniel Woodrell, late-period Cormac McCarthy, and early Richard Ford. It is, first and foremost, a story about storytelling. Characters are constantly talking about “characters.” (“This world is a veil. And the face you wear is not your own,” says the preacher, Joel Theriot, at a tent revival.) The investigation into the identity of Dora and Marie Fontenot’s murderer becomes an investigation into how we tell ourselves stories in order to live. One of the first things Marty says to Rust is “You attach an assumption to a piece of evidence, you start to bend the narrative to support it, prejudice yourself.”

All of this takes place in a kind of dreamworld version of the Louisiana and East Texas Gulf region. It’s as if True Detective happens in a diorama. Walking out of a coroner’s office, Cohle tells Hart, “This place is like somebody’s memory of a town. And the memory’s fading.”

Staring at this diorama like a blinking god, watching these men at a crossroads, watching their cars coursing across gray highways is Fukunaga’s camera. With the wonderful cinematographer Adam Arkapaw (Animal Kingdom, Top of the Lake), he captures the two protagonists as they are pulled toward their inevitable reckoning.

In the early episodes, this perspective has a unique power. It’s like Cohle and Hart are the only two people on earth. True Detective’s pacing mirrors Cohle’s drug use. In the first three episodes, it’s moody and ponderous, as Cohle pounds cough syrup and swallows ’ludes. But as Cohle hooks back into the “Crash” persona and meets up with his old Iron Crusaders cohort, switching to speed and coke, Fukunaga tightens the vise — the cutting gets quicker, the scenes play faster, and the camera movement goes from languid to frenetic.

The tracking shot is the most intense moment of the series. The most fascinating thing about the shot isn’t just that it’s long (it is), or that the shootout feels so convincingly unstaged (it does) — it’s the way Fukunaga’s camera functions as a kind of character in the house. It’s Cohle’s perspective, just heightened. The camera pauses to gaze, to wander, to linger on characters.

When this episode ended, the floodgates opened. I don’t think I’ve exchanged that many text messages about a single piece of television since the penultimate episode of Season 3 of The Wire. My friends and I were shooting each other YouTube clips from Touch of Evil …

Usually this kind of conversation would happen after a “We have to go back” or “I am the one who knocks” moment — a bit of dialogue or a twist in a story. That night, it was because of a shot.

“One of my priorities as director was to defend craft despite the constraints on my time and budget,” Fukunaga told The Guardian in March. “In every episode I wanted to at least try to find specific moments in which you could treat the visual side of the medium with the same importance as we were treating the dialogue.”

Great. But what about the filmmakers? At least in the public’s understanding, television was a writer’s medium that became a showrunner’s kingdom. From about 2000 on, we began ascribing the same kind of auteurist powers we once gave filmmakers to the likes of David Chase, David Milch, David Simon, Matthew Weiner, Vince Gilligan, Amy Sherman-Palladino, and Jason Katims.

If the Golden Age of Television was defined by the rise of the writer, whatever comes next will be defined by the arrival of the directors. Over the last few decades, filmmakers had dipped their toes in the small-screen water, for sure — Barry Levinson on Homicide: Life on the Street, Quentin Tarantino on E.R., Nicole Holofcener on Six Feet Under, Peter Berg on Friday Night Lights. But since 2010, things have been changing. Episode orders have gotten smaller (less time commitment), budgets have gotten bigger (a more attractive working environment). Scorsese directing the Boardwalk Empire pilot was the prologue. Then David Fincher, Jane Campion, Jody Hill, and David Gordon Green followed suit. In 2014, we saw more and more major filmmakers move to television — Steven Soderbergh, Jill Soloway — and in the coming years, we will only see a larger spike.2

If we’re starting a new chapter in the history of television — one in which the director’s chair becomes as important as the writers’ room — then this six-minute tracking shot from “Who Goes There” could be the turning of the page. Fukunaga, for his part, is going back to features — he is finishing the West African war film Beasts of No Nation and preparing an adaptation of Stephen King’s It. Crazy as it sounds, he might have said all he has to say as a director of television. After guiding a camera through that six-minute maze of tension, desperation, booby-trapped safes, helicopters, double-crosses, and getaway cars, it’s hard to imagine what else he could do to top his small-screen work. To be fair, it’s hard to imagine anyone could.