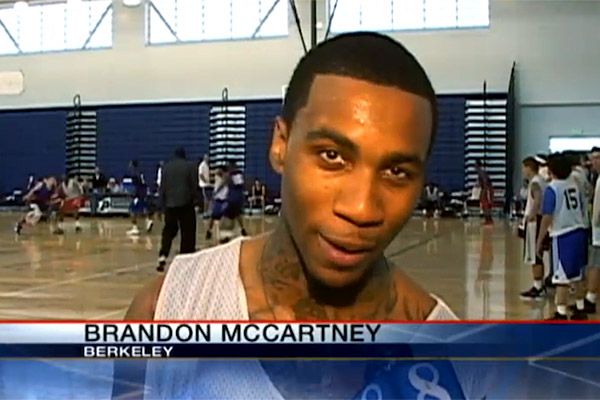 This is Brandon McCartney.

Brandon is a 23-year-old Berkeley, California, native. While not yet his full-time job, one of his greatest passions is the sport of basketball. This past Sunday, Brandon joined a crew of hopefuls attempting to secure a spot on the newly created Santa Cruz Warriors, a team within the NBA’s Development League.

Completely unrelated, this is Lil B:

Lil B is the Based God. This is his full-time job. Even though the man has seemingly put out more music in the past 18 months than your 20 favorite non–Lil B artists combined, he somehow still has time to do things like concern himself with the game of basketball.

Sometimes this is by way of dissing Kevin Durant. Other times it’s complementary to his music, by way of his mixtape Based Jam (yes, it’s a play on exactly what you think it is), which contains the song/video “Warm Ups,” giving us the rare pleasure of watching Lil B hoop:

And by “hoop,” I mean tell us how good he is at basketball:

I really would love to see more of this special move.

In case your eyes aren’t the best, Lil B says:

LIL B IS THE CHAMP!

IF YOU THINK YOU CAN BEAT HIM IN BASKETBALL CHALLENGE HIM! @LILBTHEBASEDGOD HE IS ONE OF THE TOP PGs ON THE WESTCOAST!

You talk a big game, Mr. B. Top PGs on the entire coast? Wow.

I had no idea Lil B’s signature moves were like Pokemon. But then again, of course they are.

With statements like this, Lil B needs a shot at the NBA. There has to be a way for him to try, right? Right?

Here’s the kicker. The aforementioned Brandon McCartney is Lil B (I tricked you so good). And since that’s true, it means it was Lil B that showed up this past Sunday for a shot at the NBA D-League, a.k.a. the NBA, a.k.a. Kevin Durant’s scoring title.

While it is slightly disappointing that this clip lacks Lil B tryout footage, we do get a few words from the Based God when interviewed, who spoke like the humble hero that he is:

“Just put my skills to the test, supporting Bay Area teams, and, you know, spreading that love.”

No one has ever spoken about a basketball tryout like this. Never.

And just when you thought the lovefest that is Santa Cruz D-League tryouts couldn’t get any sweeter, we meet Don Wiberg, a 76-year-old UC-Santa Cruz professor who is a self-described “decent passer” who will “get in there and mix it up.” He was present for the tryouts because it was on his life bucket list.

While I’m pretty skeptical this will happen, I’m really hoping the Santa Cruz Warriors only pick up Lil B and Grandpa Wiberg, causing all the actual hoopers to go home and rededicate themselves to old age and/or weekly mixtapes. Best of luck, guys.