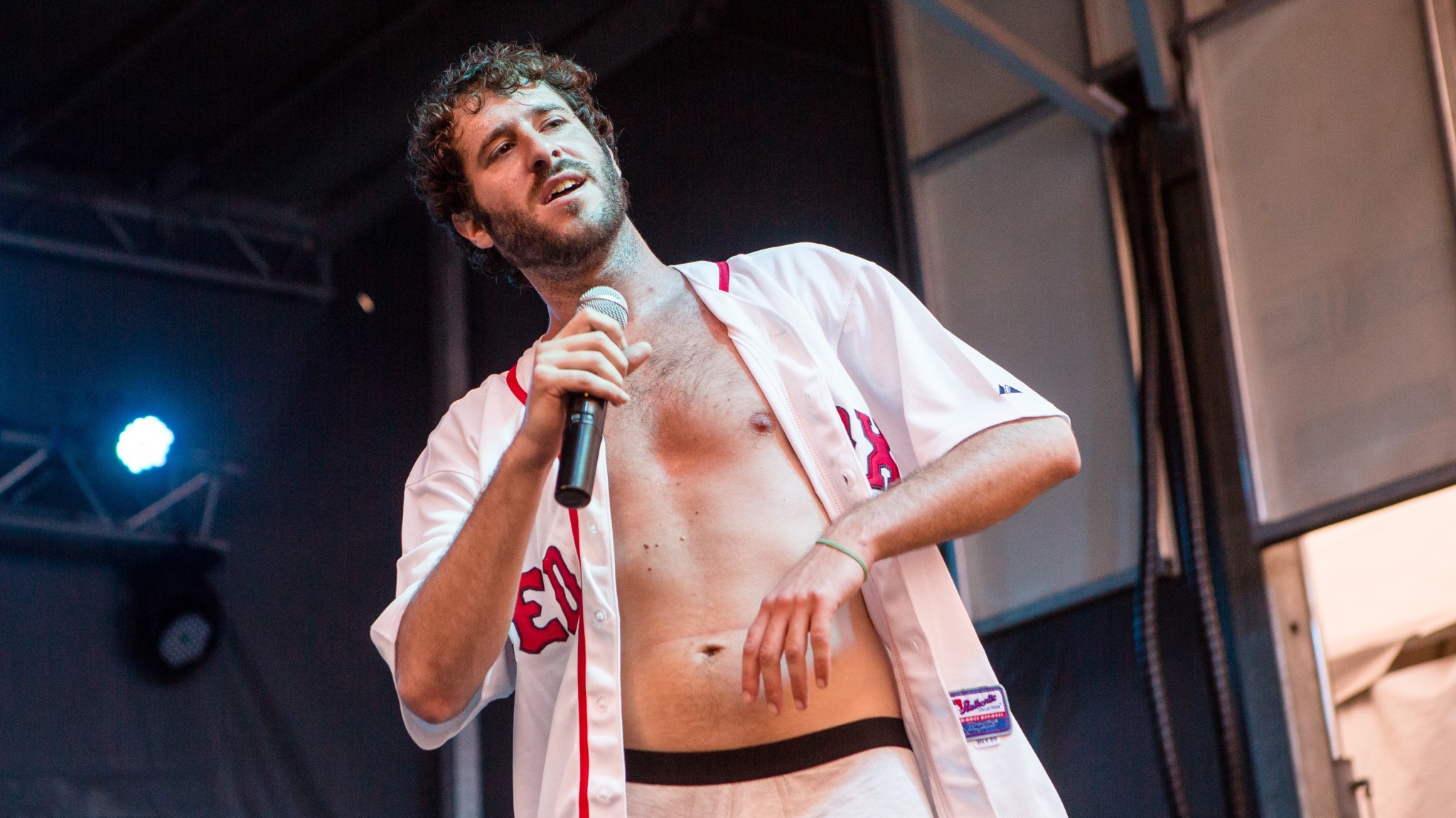 It’s a Monday night, and there’s a line down Hollywood Boulevard, a hundred or so millennials, most of whom are white, many of whom are wearing sports jerseys, all eagerly waiting to see Lil Dicky headline at the Fonda Theatre. Which for many passersby, and now many readers, probably raised the question: Who is Lil Dicky?

Lil Dicky is 27-year-old Dave Burd, a culturally Jewish ad man turned rapper via this comical hip-hop video, and then this comical hip-hop video, and now this comical hip-hop video — each of which were Internet sensations, blew up on Reddit, and quickly received more than a million YouTube views. He’s somewhere between the Lonely Island and Logic, though recently he’s been aiming for Future. He’s a concept-heavy rapper with surprisingly strong flow (listen to him prove it in the second verse in his signature song, “Professional Rapper”). If there’s brilliance in his songs — not an easy case to make, given his small-penis-joke stage name — it’s the way he self-deprecatingly picks apart his lameness, painting himself as a run-of-the-mill early-twenties “basic” male who doesn’t make it out of a pregame, smokes too much weed, and ultimately wants love but is too lost to find it.

Dicky’s Monday-night show was his third stop on his Looking for Love Tour. He bounced onto the stage wearing a baseball jersey, unbuttoned to expose his concave chest, and baggy shorts. At his side was his hype man, who sported short dreads and a black “Dickhead” T-shirt.

He opened the show with an ear-piercing rendition of the aforementioned “Professional Rapper,” the title track off his debut album, released on July 31. Its video takes the form of an interview, in which Snoop Dogg, acting on behalf of the entire hip-hop community, interviews Dicky for a position as, you guessed it, a professional rapper. “I wanted to explain that just because I’m rapping in this funny way doesn’t mean that I’m not worthy of actually being evaluated as a rapper,” Dicky explained to me in a phone interview last week. “I also wanted it to be on the theme of my life, you know, everything being built off of my résumé and, like, from 14 to 23, my whole life being geared around my résumé. So I thought, what better way to get that message of being worthy as a rapper out than treating it as a job interview and selling my case? Like, literally.”

The song is effective in synthesizing his meta story into a listenable six-minute rap song, but in terms of being taken seriously as a rapper, it’s hard to believe you’re hearing him correctly because, what’s a worse way to be taken seriously than a job interview gag? “Professional Rapper” does the opposite of its ostensible mbission. The track sets Dicky up as an anti-rapper who parodies the genre’s excesses while flaccidly asking to be let in. He quite brilliantly manufactures a gatekeeper, in Snoop, whose job it is to hire him, however begrudgingly. Problem solved. He’s in. Let’s rap!

But first, back to the Fonda for a quick monologue: “Look, I don’t know if y’all can tell by now, but I can’t really rap like a lot of these rappers. I don’t have a Bugatti, a Ducati. I drive a 2002 Toyota Avalon — and boy does that thing run well. But for one song I want to know what it feels like to drive a Maybach. I just want to feel mentally, in my mind, like I do in fact drive a Maybach, so I want you all to perceive me as such. Not only that, when this beat drops, everybody in this bitch drives a Maybach.”

He followed the monologue with “How Can I Become a Bawlaa,” an unimpressive song off his first mixtape. The title says it all. He wants to rap about “money hoes et cetera,” but he can’t because, you know, he was born white and middle class. It’s not a particularly funny song and most of the jokes — “Homicidal tendencies / The only dough that I can boast about is seeded sesame / I’m jealous B” — fall flat. But the sentiment was genuine, and, I imagine, shared by most of the predominantly white crowd — few of whom were rap concert rookies. To a degree, he has captured an element of what brought hip-hop into white suburbs and is projecting that quality back to his audience. It’s hip-hop as a vicarious experiment in excess, a simulation of a more eventful, glamorized lifestyle. What separates Dicky is that he makes no bones of simulating the experience with us. He wants to be cool as much as we do. It’s what he’s shooting for by spitting quick, welcoming fame, and engaging in his own kind of excess — he brought out a crossbow at one point for the sake of a joke. And yet, all the while he’s telling us how wack he is.

To further prove the point that he’s not capable of living the hip-hop dream, he’s quick to reveal that his next goal in life is finding love and settling down. He’s after traditional, plain vanilla monogamy, hence the name of his tour. In a move equal parts sweet, hilarious, and corny, he made Monday’s show into his own sort of Newlywed Game, an interlude in which he’d sporadically choose eager women in the crowd to come on stage, spin a wheel, and earn his love. The first contestant was tasked with drawing Dicky’s portrait (on stage, while he rapped); the second had to pin a dick on his hype man; and the third went on a mock after-date walk to the (invisible) door, which ended in a kiss, and then another.

“I feel pretty good about kissing Lil Dicky. He was a good kisser,” Girl 3, a 22-year-old FIDM student, said after the show. “Personally, he’s a white Jewish rapper, I’m a white Jewish girl, so that’s cool. I also like that — I don’t know, he’s just, like, relatable, because we’re all trying to save money. We’re young, you know. He’s just original. Something that hasn’t been seen quite yet.” This is what Dicky’s going for. He wants to be the best, but really he wants to be the best that he can be, which means making people laugh and creating hip-hop that’s banally relatable.

“Obviously my aspirations are to be considered one of the best,” he told me last week. “Like anyone rapping should have that mind-set. But really, do I think that in 10 years people are going to look at me the way they look at Jay Z? Like, no, I’m not an idiot. I doubt that that will happen. But I do think that I can create some sort of lane or niche that hadn’t really been used before.”

At this moment, Lil Dicky is probably at the success-maximizing point of his outrage curve. Bloggers have already accused him of appropriation, white privilege, exploiting his Jewish heritage, and just plain being an asshole. One of Dicky’s songs is called “$ave That Money,” a “Thrift Shop”–esque ode to being frugal — a direct counter to hip-hop’s penchant for emphasizing conspicuous displays of wealth that opened him up to “Thrift Shop”–esque racial insensitivity complaints. But he’s not yet famous enough for these critiques to reverberate like they did for Macklemore. What Dicky must realize if he wants to break through to the next level is that he’s at his best when he’s at his goofiest — creating dating game shows, or featuring his brain on an 11-minute song about pillow talk that meanders into a conversation about an alien invasion; he’s at his worst when it feels like he’s satirizing hip-hop and/or societally marginalized groups. It’s hard to imagine another path but that of the clown or the roastee. For good and for ill, he still believes that “the funniest I ever was in eighth grade.” And that’s how he appeared to me on Monday, only by show’s end his shorts were off and he had a blunt in his hand.