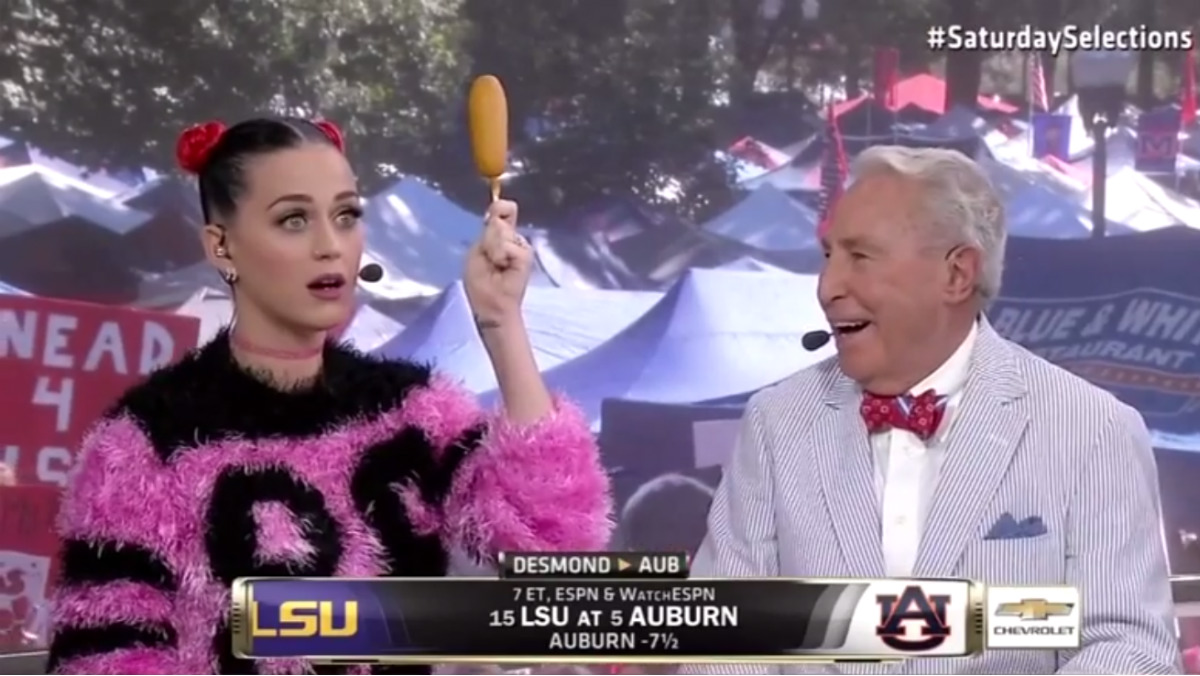 World famous pop star Katy Perry made a “surprise” drop-in appearance on ESPN’s College GameDay on Saturday to hang out with hosts Lee Corso and Chris Fowler and make predictions. Perry was dressed in a fluffy pink sweater that mimicked a football jersey, and she sported two Ole Miss red Sailor Moon buns on top of her head. She later made it to the field in an outfit that looked like she stole it out of Charli XCX’s closet, which is to say, from the ’90s.

If you saw this, or heard about this happening over the weekend, you probably had some questions. Here are some attempts at answers.

Is there a precedent here?

The wild card celebrity appearance for a random ESPN college football game is a trend, and Perry’s drop-in was not too different from last year’s Eminem cameo on Saturday Night Football for a Notre Dame–Michigan game. Eminem showed up to promote The Marshall Mathers LP 2, but also to showcase his crazy-eyed, awkward-pause-heavy style of anti-comedy. Perry is theoretically still promoting Prism, but the album hasn’t spawned a new hit since “Dark Horse,” and, of the five singles she’s released off it, only “Dark Horse” and “Roar” really went as big as her previous big singles. “This Is How We Do” was released in August and sank like a stone despite a viral-ish video. “Birthday,” which seemed like a surefire hit, misfired in April due to Perry’s own foray into confrontational anti-comedy and Kroll Show characters via the very strange music video.

Why would Katy do this?

Perry announced that she favored Oklahoma over TCU because she has a crush on the Sooners’ starting quarterback, Trevor Knight. She held up a sign that looked like a giant Valentine’s Day heart lollipop containing a picture of Knight, and said “Trevor Knight, call me!” She also held up a corndog a number of times  apparently to troll LSU fans. She did prop comedy with some other phallic objects, like a giant pencil, and threw a plate of corndogs at the camera.

Wait, but seriously, why?

She really might want Trevor Knight to call her! Perry has been single since splitting with John Mayer earlier this year. What better place to do a live personals ad letting the world know that she is available and down to date college athletes than an ESPN show? She also admitted that it was her first time at a college football game and that she was not there to contribute any real commentary on the game, just jokes and Judy Tenuta–style wacky dame reaction faces. Lee Corso and Chris Fowler were charmed as Perry did her best “Mariah wheeling an ice cream cart onto TRL“ impression.

The real reason Perry may have appeared on the show was to shoot down the rumor that she might be the Super Bowl halftime show act this year, which she turned down due to the new policy that acts must pay to play the gig. Perry said, “We had some conversations, and I would be honored, of course, but … I have let them know that I’m not the type of girl that would pay to play the Super Bowl, so … the ball is in their field.” The NFL apparently thinks artists will pay for the exposure offered by the gig, which maybe makes sense to them in theory, but in reality means every A-list group is going to turn down the gig and they will get stuck with whoever can afford it. The NFL’s director of corporate communications, Joanna Hunter, pleaded the fifth when asked about her knowledge of the offer to Perry.

Who can say? But the tailgate goes all day. Wouldn’t you be?

Perry said she did the broadcast (which was held at tailgating area The Grove at Ole Miss) and was at the game because her manager is an Ole Miss alum.

Was it a success?

Definitely. It was a goof that showed Katy was willing to play nice while also making sure everyone knows that the NFL wants pop stars to pay for the honor of playing the Super Bowl and that she is not interested in that. Best of all, Perry’s football picks were actually pretty great? Ole Miss beat Alabama, and Perry, who “picks teams by their colors,” was seven points short of a perfect score. She celebrated by hugging Ole Miss mascot Rebel the Bear and crowd surfing in local bars. Everybody wins! Except the NFL, which is probably still hoping to convince Coldplay to cough up to play the Super Bowl and is never, ever, ever going to book Rihanna.