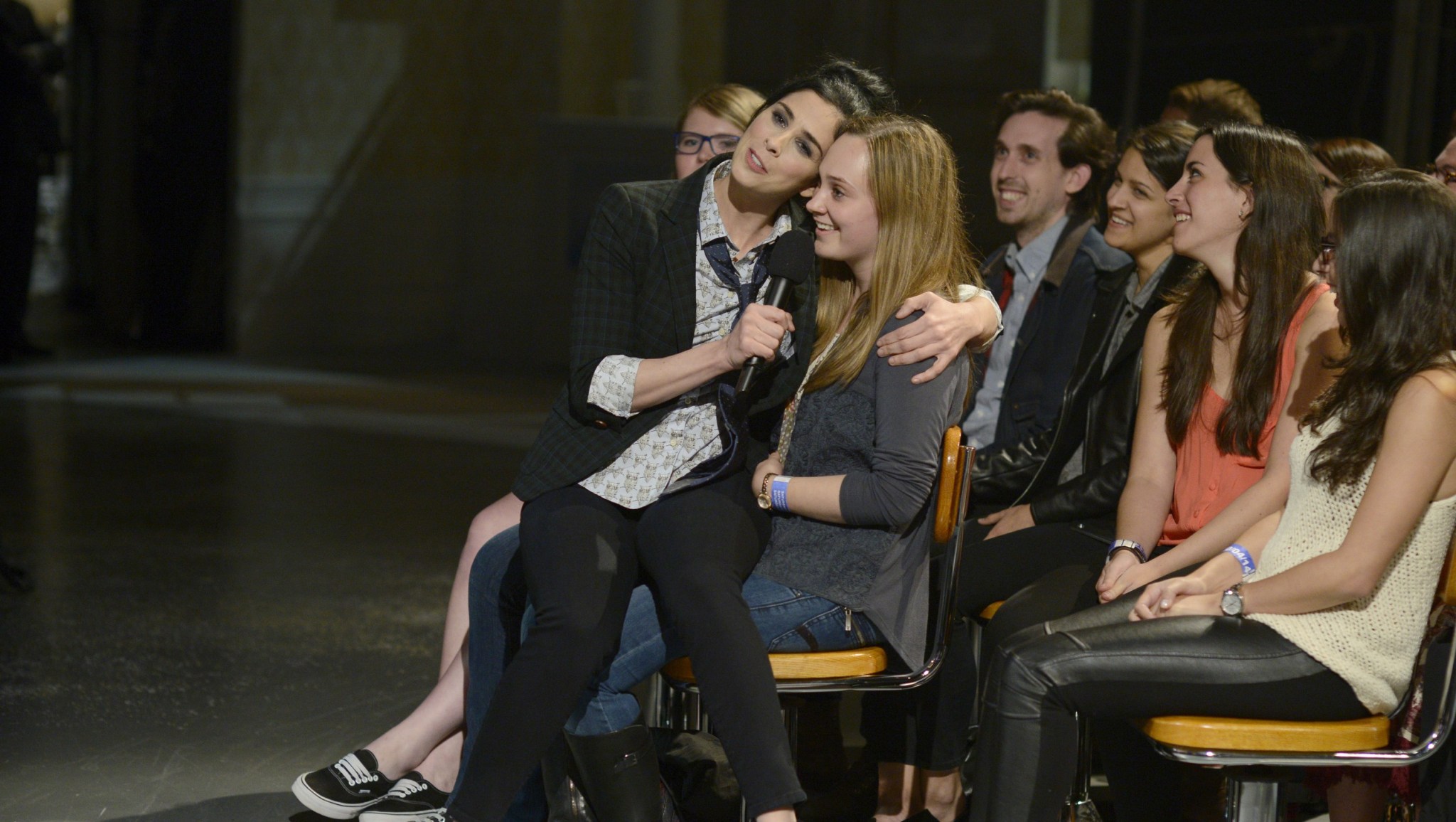 Last week’s SNL premiere had all the baked-in drama one would expect from an offseason of upheaval, mixed up with the inherent giddiness of the first day of school. It also had some great bits, and at least one standout performance from a dude most of us had never heard of before. This week, the show had a little extra oomph: Sarah Silverman — who’d had a brief, unfulfilled run as a writer and featured performer in the ’90s — was returning, triumphantly, as host. For the most part, it felt, disappointingly, like we were deep in midseason-slog form. But at the very least, Sarah’s joy shined bright.

“The return” was an angle, played up with self-aware delight, by Silverman herself. The truth is, when it comes to Silverman’s career, SNL is one of the very last things you’d remember. (The same can be said for fellow Studio 8H hit-and-run’ers Robert Downey Jr., Ben Stiller, and Julia Louis-Dreyfus before her.) As Splitsider explains, Silverman “came … up against an overcrowded and male-dominated cast including Chris Farley, Phil Hartman, Mike Myers, Kevin Nealon, Adam Sandler, Rob Schneider, and David Spade … only one of her sketches made it so far as dress rehearsal, and she was subsequently fired at the end of the season.”

Unlike Janeane Garofalo, though, who was in the building around the same time and would not be shy in criticizing the corrosively bro-y environment, Silverman was ultimately positive about her experience. Here she is in a TV Guide interview from 1997 (via Splitsider again): “SNL was the best boot camp. Then I got fired. So I went to L.A. and immediately got hired on a pilot. Right before we shot the first episode, I got fired. After that, I was so gun-shy. I’d wait until the last second to show up at any job, plenty of time for my manager to call and say, ‘Don’t show up, you’re fired.’ And then, little by little, I didn’t get fired anymore.”

And here’s Silverman’s one appearance on “Weekend Update.” She crushed it.

As expected, Silverman’s monologue leaned on her first, brief stint. First, we got a string of playing-to-type jokes — “I wanna be bathed, like a princess, or a … paraplegic”; “If you’re ever drunk at party and you throw up, I feel like you can save the moment if you muster up a tada!” — many of them told while sitting in the lap of an audience member who truly seemed like she hadn’t been briefed about what was going to happen. Then the monologue began cutting back and forth between present-day Silverman and ’90s Silverman from footage of her as an SNL audience plant. “Will you ever make a solo album outside of Wilson Phillips?” and “What did you feed the dinosaurs?,” young Sarah queried, and it was all pretty great. And by the time present-day Silverman told her younger self that maybe one day she’ll get to say, “We have a great show for you tonight,” I was genuinely touched. Never give up! Don’t ever ever give up!

The rest of the night was touch and go. The best stuff was prerecorded, whether it was the pretty brilliant Fault in Our Stars parody (“If doctors know so much, then why is my doctor dead from Ebola?”) …

… or this commercial for WHITES …

And Kyle Mooney and Beck Bennett were back at it with a (not available online) surreal few minutes — Kyle falls in love with Sarah, Beck beats the living hell out of Kyle, everything is gauzy and romantic as hell — that I more respected than enjoyed. It’s stuff like this that makes you realize what a strangely perfect SNL machine the Lonely Island guys were: They just churned out easily explainable, high-concept bits that were still totally strange. The Mooney-Bennett administration seems like it can’t really be bothered by such mundane concerns as “concept,” which is both admirable and frustrating. These guys don’t like to telegraph their stuff; they’re slier than that. But you may have to be a bit blunter to get things to work on SNL. And some of their best work so far has come when they’ve bluntly hammered home an idea. Remember this?!

“Weekend Update” will continue to be overly scrutinized (were those suits weird or am I looking too closely?) until things click into place for Michael Che and Colin Jost. Yep, they were stiff still. But they did enjoy a nice little “You’re a white dude?! I’m a black dude!!” back and forth about the proper usage of such phrases as “bae,” “cray cray,” and “in da club.” And yet the segment was straight hijacked by Kenan’s unhinged Al Sharpton, raving about the security benefits of having your very own “Dirty Willie the Wino.”

Elsewhere, Silverman put her stamp on the show, turning in an uneven but appreciated ode to Joan Rivers (which also doubled in giving us the strangely appropriate sight of Bobby Moynihan as Benjamin Franklin) and taking the reins for the “soap operas where woman actually support each other” bit. (This also doubled in giving us the wonderful delight of Kate McKinnon doing an ethnically ambiguous accent. This should be a weekly occurrence. Cecilia Gimenez 4ever.)

The night ended, as will this post, with the complicated socioeconomic politics of owning a Vitamix. Next week: Bill Hader returns!

Once in Love With Amy: How David Fincher Changed ‘Gone Girl’