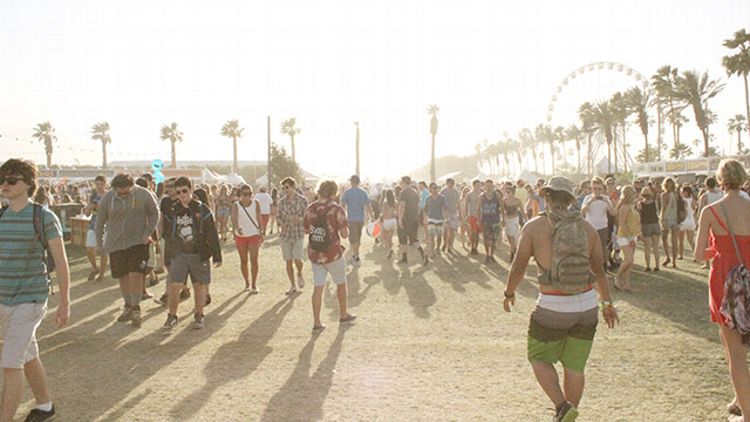 Coachella weekend is nearly upon us! I’m not sure if I’m saying that in a gleeful cry or a conspiratorial whisper, because many of us face a strange conundrum leading up to The Big Fest: Nobody likes the guy/girl who won’t shut up about Coachella, but a lot of those people are just secretly jealous. Regardless, I know you’re packing 18 different pairs of cutoffs and positively vibrating with excitement right about now, but just play it safe and shut up about Coachella until you’ve actually made it past all 87 security checks and through the polo field gates. Despite all the grumbling, for a certain slice of the population, Coachella becomes the center of the universe for three glorious heatstroke-baiting days, whether you’re headed out to Indio or just watching the livestream at home like a normal, balanced person who is blessedly immune to FOMO syndrome.

Last year, many feared the festival, traditionally seen as the kickoff of the summer music-fest season, had jumped the shark. There was the lackluster lineup, for one, plus the ever-expanding encroachment of corporate presences, and a miserable sandstorm that really could only be the universe telling us that 75,000 people weren’t meant to congregate in such harsh environs. This year’s Outkast reunion has breathed new life and gnaw-on-your-fist excitement into Coachella, but let’s be honest: Even if they booked the Presidents of the United States of America as the headliner next year and replaced every food stand with Carl’s Jr., the festival would still be the place to be in the second weekend of April. (There’s also Weekend 2, which is kind of like watching DVR’d Game of Thrones vs. Game of Thrones live. Maybe more convenient, but lacking that certain timely spark.) Like a distant, ancient star, we may all be enjoying the residual glow of a light that went out long ago, but this dead star has craft beer this year, so fuck it, enjoy yourself without shame.

If you are going: This sounds like a plug, but seriously, the offical Coachella app is very helpful, and the extremely spotty wireless service won’t be necessary to use it if you plug in your schedule before you enter the grounds. It also contains a fun and informative feature: On the schedule, you can see how many people have added each set to their personal lineups. Which means you can see which sets the average Coachella attendee sees as important, as well as which will be potential trampling zones, and which could be surprisingly manageable. “But Emily,” you say, “aren’t the only people who get the app OCD nerds, and aren’t their tastes going to be reflected in those stats?” This is a two-part question, so here is a two-part answer: (1) I am guessing the amount of people who do not schedule a set on the app will be balanced out by the people who do and decide to ditch when it comes time for the show, and (2) then I guess a LOT of OCD nerds are stoked for Zedd (11,449 and counting).

So, based off these highly reliable numbers, which may have inadvertently turned Coachella into more of a popularity contest than it already is, let’s go through some potential highlights of the weekend. Whether you want to chase the crowd or avoid it, or a little of both, you will never be short of options.

These two solid, somewhat downer-y acts will be a weird way to start off your Coachella experience, but they’re both good bets, and those are pretty kind numbers with which to ease yourself into the fray.

I didn’t know who this Davide Squillace was until 30 seconds ago, but quick! This may be your best chance to get a peek at the air-conditioned, apparently quite bourgie Yuma tent, now in its second year, before the line begins to snake around the entire grounds.

This could very well end up being your first all-out college-bro rage fest of the festival. After an afternoon of subtle house and moody female voices, it’s gonna feel amazing to hear 3,338 (or more) people in flower crowns scream the opening line of “Let It Go” in unison.

Get a burrito! Breeze through the bathroom line! Quick, while the walkers are distracted! This is your moment!

Rock fans of a certain age: You are going to LOVE Coachella. All your favorite bands’ sets double as refuges from the Molly’d-up youngs. Saunter over to the Mojave at a leisurely pace. Passively take your spot 20 feet from the stage. Look around and appreciate the amount of arm room you have. Talk to your neighbors. Network. Reminisce about a simpler time.

It is true a lot of those people will be at the Coachella stage just to get in position for Outkast, but I hear there are some #special #surprise guests in this set. And that new Freeway track is great. C’mon, we’re gonna party like it’s 2007! What else are you going to do? Continue to rest and hydrate and treat your body with respect? Amateurs.

Make all the plans you want, but understand you’re not actually going to be able to move your body until about 3 p.m. It’s not about hangovers; it’s surprisingly difficult to get really drunkers at Coachella. You just might have OD’d on fun from a ridiculous Friday night lineup. Still, one can dream …

I can think of no better way to return to the living than with Mvula’s pastoral-yet-weighty anthems.

Put on your flower crown and sunscreen (please, please wear sunscreen, you dopes) and join the weekend neo-hippie contingent at the Outdoor stage while your eyes are still too weak to roll. It’s funny, you’d think Pitchfork-approved rock would be king at Coachella, but judging by those numbers, that is absolutely not the case. If you’re a fan, this is probably a good opportunity to see two different flavors of psych-folk weirdo against the sweeping backdrop of the Palm Desert mountains.

Affect a sullen pout and pick your favorite societal institution to submit yourself to. Do not be surprised by the ratio of bros to girls at these sets.

This is a new addition to the lineup as of two days ago, and it could be disastrous, glorious, or gloriously disastrous. Worth catching at least part of, either way. Casablancas’s 2009 solo album Phrazes for the Young is very underrated! (she said, wiping away flopsweat).

I’m not going to tell you how to live your life, but if you are over the age of 22 and don’t want to feel older than 60, might be best to stick to the beer garden for the Cud. Don’t worry, the contact high will extend that far.

If you want to feel ageless, on the other hand, get as far away from the MGMT main-stage set as you can (11,648 scheduled and counting!) and go watch Samuel T. Herring dance like a more reasonable number of people are watching.

The sky will be a glorious shade of purple, and our Lorde will also be dancing to her own personal spirit rhythm. By all evidence, she is still finding her feet as a live act, but this’ll still be worth seeing, and a no-brainer if you’re a stan (not that I know any of those). Maybe she’ll bring out Rick Ross!

I find it odd that we have two of the highest-charting acts of 2013 playing the Outdoor stage, but forget it, Jake, it’s Coachella. Foster the People (7,859 scheduled) must have their prime-time main-stage real estate.

I can’t tell if those numbers seem low or not. But honestly, nothing makes sense after 11,000-plus for MGMT.

This will be one of the buzzier sets of the weekend, but not a stand-still-and-make-mental-notes-for-your-blog kind of buzzy. I predict a friendly set and a friendly crowd, with everyone being loopy goofers on their Day 3 jelly legs (among other things). Good times.

Come show your support for Dev Hynes, who put out one of the most critically adored albums of 2013 and still managed to have a pretty crappy year. Good vibes at this one, too. Let’s try to keep it going!

[Sad trombone/singing saw.] I was secretly hoping to have something really pressing scheduled opposite this, thus keeping it in a Schrödinger’s box of things I’ll never experience and thus never be disappointed or disillusioned by. When was the last time I listened to In the Aeroplane Over the Sea? Does it matter? I can’t help myself. If this ends in tears, I’m very aware I did it to myself.

Am I crazy for thinking this will actually be a lot of fun? Calvin Harris might be the least hateable multimillion-dollar, radio-friendly dance producer working, and this is at the main stage rather than the Sahara, so the mood will be way less moblike. Ellie Goulding may very well make an appearance; the last sunset of the weekend most definitely will.

I saw Disclosure last fall, and they were strictly aight live, but they’re kind of made for a festival like this, and there’s a rumor they might be having a “good friend” come help them out. So do with that information what you will.

And it all comes down to this. How you decide to close out your 2014 Coachella experience will likely determine the course of the rest of your life, so don’t choose rashly. All four attending Grantland correspondents have already picked their path, and it might not be what you’d guess.