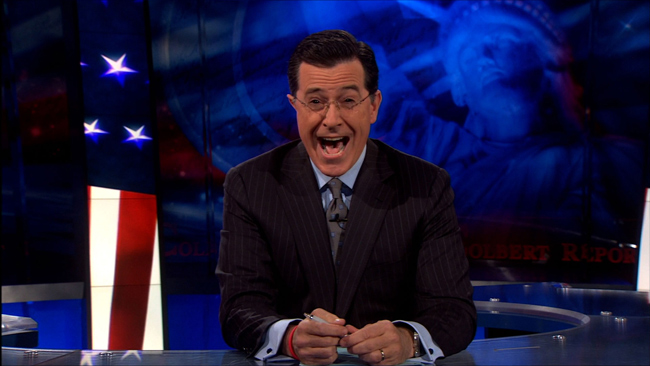 This morning, CBS announced that Stephen Colbert would become the new host of The Late Show beginning in 2015. The move, while predicted by some, was still shocking, arriving as it did mere days after the announcement of David Letterman’s retirement and just weeks after a mis-tweeted joke led to a Colbert mini controversy — a controversy that would have had far longer legs had he been on risk-averse CBS, rather than on the perpetually punchy Comedy Central. With that in mind, here now are my three initial thoughts on Stephen Colbert’s dramatic, bloodless assumption of the Late Show throne.

One reason the network has excelled under the nearly two-decade-long reign of chairman Les Moonves is consistency. While the other networks seem to revel in chaos — NBC, in particular, has veered close to a performance-art piece for a number of years — CBS churns out a popular, recognizable product, from acronymed procedurals to multicamera comedies. This steadiness extended to late night, where Letterman has hosted the Late Show uninterrupted since 1993.

So there was no real chance Moonves would allow the race to replace Dave to explode into any sort of circus. Securing Stephen Colbert as the Late Show replacement just six days after Letterman’s surprise announcement is business as usual for TV’s smoothest operator. Leaving aside all questions of whether Colbert is the right host for the job — putting a 50-year-old up against the much younger Jimmies is either foolhardy or wisely steering into the demographic skid — locking him up now saves Moonves from a year’s worth of unnecessary headaches: no leaving Craig Ferguson twisting in the wind (no leaving him poor, either), no awkward lobbying from would-be applicants, no appearances of corporate indecision or doubt. (The only real victim here is the Internet Industrial Complex, which was just cheated out of months of speculative slide shows and charticles.) CBS’s brand is stability, and by replacing a known, beloved commodity with another known, beloved commodity, CBS’s brand remains healthy.

Here’s the multimillion-dollar question: Is Stephen Colbert really a “known, beloved commodity”? Though some still refuse to believe it, the character Stephen Colbert plays on The Colbert Report is very much a character. This is partly what makes The Colbert Report’s success over the past nine years both astonishing and unprecedented. Has a single joke ever been stretched across a decade? And that’s to say nothing of the performance pyrotechnics necessary night after night to improvise an interview segment that must be both informative and hilarious. No one has ever accomplished what Stephen Colbert has done with the Report, which is probably why, after 10 years, he’s ready to stop doing it.

The real Stephen Colbert, like “Stephen Colbert,” is lightning fast and wickedly funny, but he’s nowhere near as wicked: His own perspective on the world more closely mirrors the frustrated, noble liberalism of his colleague Jon Stewart than the puffed-up buffoonery peddled by his alter ego. So while CBS has absolutely snatched up a virtuosic talent, it won’t be getting the character that has, until now, defined him. In the long term, this is a good thing: CBS, as outlined above, is not interested in making waves. It wants a talk show host, not a sentient political parody. But when Colbert takes The Late Show reins in 2015, he will be doing something quite different from what his legion of coveted 18-to-49-year-old fans have come to expect from him. And this uncertainty makes his hiring more of a risk that it might initially seem.

Colbert (the real one) has long impressed those around him with his professionalism and wit. In a podcast we recorded earlier this week, Kent Alterman, Comedy Central’s president of original content, remembered Colbert as the ringleader of the crew that would eventually write, produce, and star in the cultish ’90s series Strangers With Candy. “He’s immensely talented in ways people don’t even realize,” Alterman told me. (Look for that podcast to post next week. For what it’s worth, on Tuesday, Alterman claimed no knowledge of a Colbert-to-CBS deal, suggesting that either he has the world’s best poker face or that it all went down yesterday.) And ever since the Report took off, there has been off-the-record chatter that Colbert would be far likelier to jump to a network gig than the more settled Jon Stewart. But while there’s no question Colbert has the talent to host a more traditional talk show, the question is whether anyone is particularly invested in seeing him do it. The leap from specialist to generalist is a tough one to make. What Colbert is doing now is peerless; what he’ll be doing next year is decidedly not. With Fallon soaring and Kimmel entrenched, just being good enough won’t be nearly enough to cut it.

Just a year ago, when NBC announced its plan to replace Jay Leno with Jimmy Fallon, much of the conversation focused on how the mystique of the late-night talk shows was diminishing. Comedy Central, with its Stewart-Colbert tag team, was regularly trouncing Leno and Letterman in the all-important young male demographic. Now Fallon is stomping all competitors out of the gate and Comedy Central is suddenly reeling. Colbert has said he’ll continue his show through the end of the year, but that’s still precious little time to come up with a way to replace him. The best suited in-house candidate was John Oliver, who turned his multiweek stint filling in on The Daily Show last summer into the world’s best audition tape. Not long after Stewart returned, HBO beat back other suitors (reportedly including CBS) to snatch Oliver away. (His new show, Last Week Tonight with John Oliver, debuts Sunday, April 27.) The move disappointed those in the know at Comedy Central, but didn’t surprise them: With Stewart and Colbert given carte blanche to do their shows as long as they pleased, there simply wasn’t a spot available to keep Oliver in the fold and happy.

Things would be far more dire if Stewart himself showed any inclination to leave or retire. 2015 will mark his 16th year behind the desk, and the reason Oliver had his career-making shot in 2013 was because Stewart had requested time off to direct a film. If Comedy Central were suddenly without both its linchpins, it might prompt something truly revolutionary (a nightly live improv show from the UCB theater?) or truly desperate (luring Conan or a suddenly third-place Kimmel to the relative freedoms of basic cable). But from all indications inside and outside the network, Stewart has expressed no desire to leave and that’s unlikely to change, particularly with another major election two years away. He’s also Colbert’s no. 1 supporter, as evidenced by this interview he gave last night, before the news broke but almost certainly after Stewart was aware of it.

Come 2015, though, there will suddenly be a gaping hole between The Daily Show and the very successful newcomer @Midnight. Will Comedy Central gin up another, politically minded companion show to pair with The Daily Show? (Perhaps real-life marrieds Samantha Bee and Jason Jones are up for a news-magazine show that mixes the shouting of Crossfire with the sexual tension of … Crossfire?) Or will it reach instead into its deep bench of existing talent in the hope of crafting something entirely new? (To my mind, a Hannibal Buress talk show sounds a lot more appealing than a “Hannibal Buress does random jobs” show.) A source at the network indicated that “everything is on the table” — and it probably needs to be. Late-night television isn’t what it used to be in terms of ratings or prestige, but it certainly isn’t boring.