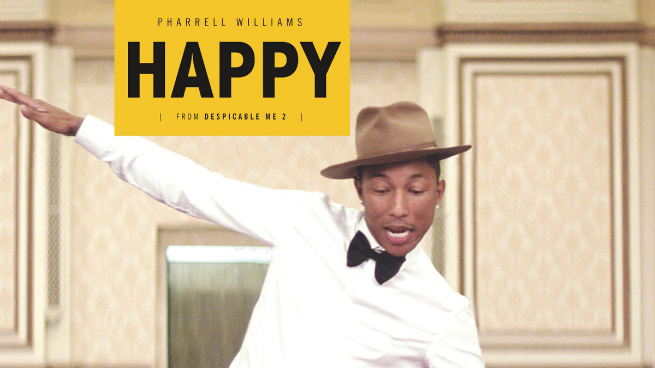 Welcome back to the Overplayed Song of the Week, in which we take songs we’ve heard too many times on the radio and generally overthink them.

Weeks on Chart: 13
Peak: No. 1 on Billboard’s Hot 100 (for the past seven weeks)
Current Radio Play Frequency: Every five seconds on every station
YouTube Hit Count: 171,174,804 at time of publication

Oh boy, do you probably hate this song by now. But that’s too bad, because its indomitable reign over your summer has only just begun! Pharrell has owned summers before with songs like “Hot in Herre” and “Beautiful.” (In a better world, “Creamsickle” from In My Mind would have been a big summer hit too.) Pharrell understands what kind of songs go with a sweaty, sweltering day just as well as a freezing, drafty one; “Happy” is a drink that tastes equally delicious hot or cold. When “Happy” starting climbing the charts around the time of its Oscar nomination for Despicable Me 2, it was a bluebird of spring beckoning from the distance that, yes, flowers will grow again soon. Now that the temperatures are starting to climb, “Happy” is a refreshing, icy treat, a Dole Whip in song form.

What’s that? If you hear this song one more time you are going to rip your eyeballs out? Well, gouge away! “Happy” is not going anywhere. Like “Get Lucky” before it, if you listen to it enough times, eventually you reach the event horizon where it sounds totally fresh again. Because they are! “Happy” has been kicking around since last summer, when it was released on the Despicable Me 2 soundtrack. Like that movie’s Minions, “Happy” is equal parts unavoidable and undeniable, and if it doesn’t make you feel at least a little bit fizzy, you might not have a soul to squeeze. Of course, we’re all a little bit sick of it. It peaked around the Oscars, and has been played on every radio station constantly since then, because it seriously fits in any format except possibly country (and Miley’s next single is rumored to be “4×4,” so here comes Pharrell for that country music crown too!). Even if you don’t listen to the radio, you can’t get away from it — Gwyneth Paltrow did a version on the 100th episode of Glee, and it’s been on The Voice, The X Factor, Fiat commercials, and SNL, where Pharrell performed it as a musical guest. But if we’re going to hear it a million times, at least “Happy” has fantastic replay factor.

What really sets “Happy” apart from everything else popular on the radio right now is its effervescent bossa nova funk sound. Sergio Mendes has a cameo in the 24-hour version of the video, so you know Pharrell has been listening to some Mendes and Antonio Carlos Jobim records and getting inspired. If Pharrell says bossa nova is the next big thing, you listen, and that aspect of it is the key to the breezy appeal of “Happy.” It’s deceptively light, with a heavy bottom. Just like Mendes, Pharrell has a talent for pulling off unexpected genre fusions that have mass appeal but are never the lowest common denominator. “Clap your hands if you feel like a room without a roof” is a great line because it’s so ambiguous; it makes you think of a million different things. Lately it makes me think of a backyard patio party, like the one in Blue Is the Warmest Color, where everyone is hanging out casually under some twinkly lights as the sun goes down, drinking ice-cold caipirinhas. Because I’m happy!