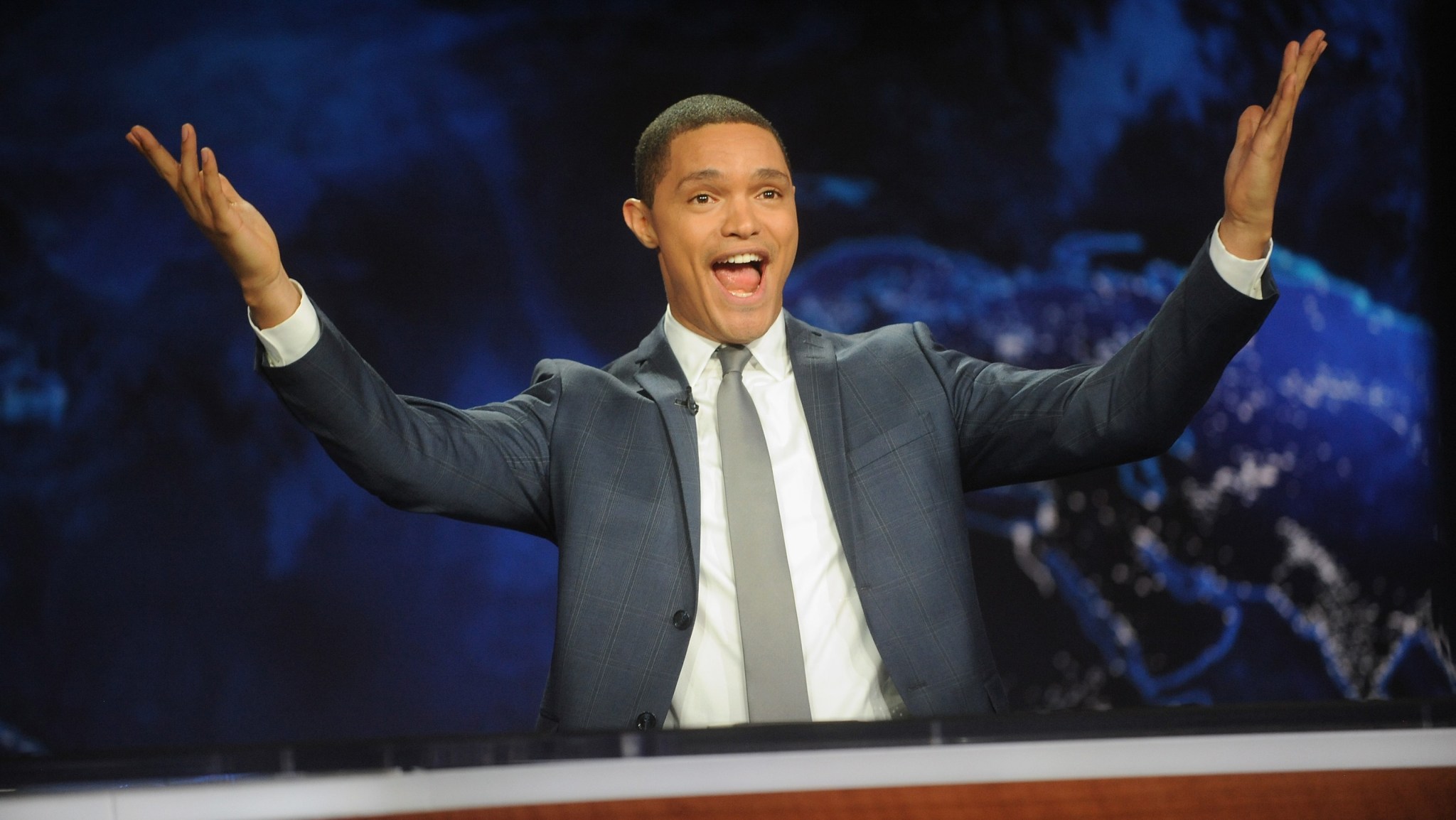 In a year marked by bumpy late-night debuts and exits, Trevor Noah’s performance on his very first Daily Show was remarkably smooth. The new host’s hair didn’t gravitate upward, like Stephen Colbert’s, in search of inspiration or escape; his shoulders never sank with the weight of the moment, like his predecessor’s did in his final broadcast just two months ago. In fact, it was almost uncanny how relaxed Noah seemed — despite the big shoes to fill and the indoor plumbing to adjust to. Resplendent in a suit the color of Cloud City, Noah took to his daunting new desk like it was a Barcalounger. His laugh was easy and unforced. The smile he flashed was gleaming enough to get a non-fake-news job.

Before criticizing or applauding anything else, let’s pause to note how remarkable this was. The question of whether Trevor Noah can replace Jon Stewart in the hearts and minds of his audience cannot be answered in a single broadcast. Noah’s capacity to assuage the neurosis of a nation of embittered liberals, his willingness to punch up at power instead of blowing raspberries at the puerile, his ability to accept a box of ties with something resembling gratitude: All of this, today, remains TBD. Last night offered precious few hints of Noah’s own sense of humor, let alone his politics. But the suits at Comedy Central are popping bottles of South African shiraz in the executive suite this morning nonetheless for one reason and one reason alone: Noah, without question, is a star.

Here’s why that matters: Going by the modern rulebook, there are two paths to sustained late-night success. You can either try to harness a supernova or create one. Both have their advantages — there’s no question the overnight ratings (and hosannas) would be much better this morning for The Daily Show With Louis C.K. — but as television’s margins have slipped and its cultural footprint has grown, it’s the latter method that has become the wisest. For proof, just look at the broadcast nets: NBC rolled the dice with Jimmy Fallon six years ago when it handed him a Late Night franchise still snarking in David Letterman’s long shadow. The glad-handing, lip-synching human muppet they wound up with wasn’t necessarily anyone’s long-term vision for The Tonight Show. But even Fallon’s haters would agree that he has created an entirely new template for late night, one that is going to make audiences, celebrities, and celebrity publicists very happy for a very long time. And it’s going to make NBC/Comcast/Sheinhardt a lot of money in the process. Fallon grew the show rather than shrinking to fit inside someone else’s definition of it.

CBS took the opposite approach. To replace Letterman, network boss Les Moonves looked past the untested well and reached for the most established, top-shelf talent he could find: Stephen Colbert. And the results have been … fine. Look, there’s no question that Colbert is still growing into his job, and his ability to pull emotion and meaning out of the black hole that is the 10-minute couch interview is nothing short of miraculous. Still, less than a month in, there’s a sense that CBS is settling — the reason being that, at 51, Colbert is a finished product. His skills, though prodigious, are defined. His audience, though sizable, is set. Moonves, diabolical genius that he is, likely can and will profit from a show that comes in second place to Fallon every night — and there’s something to be said for a host able to win laughs and affection without the aid of an inflatable fat suit. But the goal for profit-generating franchises like late-night shows shouldn’t be appeasing yesterday’s fans. It should be making and sustaining tomorrow’s.1

With that in mind, Comedy Central absolutely made the right choice when it gave The Daily Show to the relatively untested Noah. (Though “gave” isn’t entirely the right word. Noah made some winning jokes about it, but it remains absolutely true that the network reached out to Louis C.K., Amy Poehler, and Amy Schumer before him.) The network isn’t looking past the 2016 election with this hire, but neither is it fixated on it. The goal is for Noah to be there for Kanye in 2020 and Charlie Bit My Finger in 2024. His shtick will be fully formed by then, his moments of Zen will be his own. As any opera singer can tell you, a voice can be trained, shaped, and developed over time. But all the experience in the world doesn’t matter if you can’t hit the right notes on day one.

And hitting the right notes was exactly what Noah did last night, to an almost absurd degree. Anyone stepping into a fine-tuned vehicle like The Daily Show for the first time would be forgiven for fumbling with the keys. But Noah revved the engine like a pro. There were no evident nerves as he zipped through a perfectly fine segment about the Pope. He tangoed nimbly with Jordan Klepper without once stepping on the correspondent’s toes. When Noah looked into the camera and swore to continue waging Stewart’s self-proclaimed “war on bullshit,” I’m sure I wasn’t the only one in the audience ready to grab a shovel and a bottle of Febreze and join him.

That the bulk of the broadcast felt safe and familiar was no accident. Comedy Central made sure to keep nearly the entire support structure of Jon Stewart’s Daily Show intact, from the writers and directors to Bob Mould’s lawyer, still cashing those residual checks nearly two decades later. With so many people loyal to the institution before the host, there was never any question that Noah might stumble out of the gate. But neither was there any chance that he would truly surprise. This is a conservative strategy that benefits everyone. Comedy Central gets a sense of continuity for its shareholders and the chance to reward its long-time employees. And Noah gets experienced shoulders to lean on, not to mention points for humility. By the time he breaks anything, he’ll already own it.

Still, if you squinted, there were a few signs of what’s to come. Squeezed between the tributes to the now-departed “political dad” were more than a few kid-friendly references. Noah spoke to an audience watching “at home or on your phone” and effortlessly delivered an emoji joke that would have had Stewart, the Luddite, breaking out in a cold :(. This was intentional, as Comedy Central has big plans to transform The Daily Show from a series devoted to mocking a certain television channel to one that breaks out of the television altogether. (Hiring Baratunde Thurston to lead the show’s digital content initiative was a fine, underreported start.) The episode’s highlight was unquestionably Noah’s interplay with new correspondent Roy Wood Jr., whose dyspeptic demeanor brought to mind the glory years of Lewis Black. It was a peek at what this new Daily Show is capable of once it reaches altitude: comedy that is diverse in more than just skin color; a multitude of fresh, vibrant faces all rolling their eyes in unison.

Were there hiccups? Sure. Noah’s interview with Kevin Hart was no disaster, but it wasn’t much better. It was telling that Hart spent the entire segment with his body turned toward the crowd and not toward the host. It’s true that Stewart wasn’t any good at interviews for a full decade, but at least his default setting was not giving a fuck. Noah was perhaps too unflappable, precisely when some flapping would have helped. (“I appreciate what you stand for,” he said before suggesting that Hart stood for … jogging?) It was a sign that Noah’s cool professionalism has its limits. Not because his apparent lack of liberal fire offends me or my Nation subscription. But rather, even-handedness, as a political and professional philosophy, is the sort of thing that is beloved by executives but increasingly ignored by audiences — and doubly so by comedy audiences. In the days and weeks to come, it will be important for Noah to jerk the wheel one way or another, secure in the knowledge that an early smash-up is preferable to a show stuck on cruise control.

Still, I’m not overly concerned. When Noah, a recent immigrant, tamps down his political beliefs it reminds me of the time when, in the midst of an unfortunate teenage dabbling with vegetarianism, I told my Spanish hosts that blood sausage sounded “really interesting!”2 Noah is a newcomer to both our country and our airwaves. The fights he’s been tasked to cover — between Boehner and Bernie, between reality and truthiness — are ones in which he has yet to publicly pick a side. It’s not that he doesn’t have an opinion. He just doesn’t want to offend. At least not yet — and not so soon after his disastrous introduction to the public consciousness via some very old, very unfunny tweets.3 In the long run, this patient approach can be a good thing. Noah used his background only for light humor last night, but it’s inevitable that his unique perspective on the world — biracial man born into South African apartheid — will come to influence and, ultimately, define The Daily Show. But for now Noah is content to use that perspective in the service of self-effacing comedy bits that are less about his life and more about how funny it is to say “Boehner.” Which, you know: fair enough.

But that’s all in the future. It’s no accident that the sharpest commentary on Comedy Central last night came in the minutes after Noah abdicated the airwaves, when Larry Wilmore calmly, surgically eviscerated Jeb Bush’s toxic racial politics. Wilmore, it should be noted, is 53 and has been writing and performing comedy in the U.S. for more than 20 years. Which is to say, he started at more or less the same age Noah is now, though with considerably less poise and nowhere near the same size stage. The Daily Show returned last night, in steady hands. What matters now isn’t what happens tonight. It’s what happens tomorrow. And it’s likely to stay that way for some time to come.

Travis Scott on New Fame, Past Accusations, and His Wild West Live Show