Peace, Love, Unity, and ‘Recess’: The Joy of Skrillex 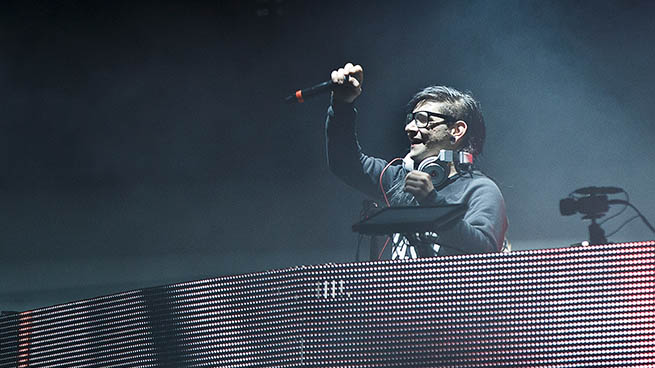 Last Friday, brostep pioneer Sonny “Skrillex” Moore released a mobile game app titled Alien Ride, by all appearances a simple tilt-motion dodging game augmented, naturally, by “fresh graphics and killer audio.” This was not the first time our friend Skrilly had ventured into the world of gaming; Skrillex Quest, a glitchy browser-based adventure game, debuted in late 2012, featuring a ghostly princess (totally Ellie Goulding), an eerie desert wasteland (totally Coachella), and music from his EPs, 2010’s Scary Monsters and Nice Sprites and 2011’s Bangarang. Alien Ride seemed like a similar just-for-laughs side-dabbling, with the added bonus of being cryptically linked to his recently announced Mothership Tour. But it also came bundled with 11 mysterious locked files, which on Monday night began downloading and were revealed to be his first album proper, Recess.

Or at least, “proper” as you choose to define it. Those of us currently enjoying Recess via its string of dancing alien faces in the app’s trippy interface will probably cease to have access to the files once the album officially drops on March 18 (which, as Alien Ride is happy to point out repeatedly, you can pre-order now.) So in that way, Alien Ride is simply a more convoluted version of the iTunes stream, which has become a more and more common stop on a contemporary pop album’s rollout. Recess’s unorthodoxy resides in a relatively unpopulated middle ground between the current traditional promotion cycle and a surprise dive-bomb à la Beyoncé. “We’ll probably make less money doing it this way,” Skrillex told Rolling Stone, echoing Mrs. Carter-Knowles. “It’s more about the fans.”

Is that a roundabout way of saying the fans don’t actually purchase the albums? What does an album even mean in the arc of Skrillex’s still-rising career? I consider myself a fan of Moore, but it hadn’t really occurred to me that he had never released an LP until the press releases highlighting this fact started rolling out. Skrillex experienced a meteoric rise, a backlash from purists, and eventual mainstream acceptance all on the back of a series of EPs and a seemingly never-ending touring schedule (as well as his prominence in the soundtrack to 2013’s zeitgeist orgy Spring Breakers). The tipping point could have easily been the moment A$AP Rocky shouted him out a year ago on the Long.Live.A$AP collaboration “Wild for the Night,” which was either hilarious or shark-baiting depending on where you were sitting. But the track, while enjoying a decent amount of radio play, peaked all the way down at no. 80 on the Hot 100 and thus never wore out its welcome, allowing whatever wave he’s riding to keep building, never quite cresting and crashing. Skrillex has the odd distinction of being both one of the biggest names in electronic music and incredibly avoidable, which may actually be for the best — both for his detractors and his fans.

For me, the definitive Skrillex experiences are the occasions I’ve seen him live, and that’s not just a regurgitation of the more-or-less self-evident argument that touring is where the money is for EDM artists. It’s the basic fact that a Skrillex festival set is one of the only places on earth where it’s socially acceptable to move your body the way his music requires of you. Other big-name producers apply their fashionable sheen to radio-friendly pop hits, but Skrillex’s signature head-throttling dubstep is among the most exuberant, cheerful sounds in music right now, and as such still pretty incongruous with his contemporaries. One minute into Recess’s opening track, “All Is Fair in Love and Brostep,” I started giggling uncontrollably, not because it was funny or bad, or because the track was called “All Is Fair in Love and Brostep,” but because it was so uninhibited, so unconcerned with being cool, and thus, completely cool. (For the record, it was 9 in the morning and the strongest substance I was on was green tea.) The word “aggressive” is frequently applied to Moore’s music, but it’s misleading — Skrillex may want to obliterate your face, but he doesn’t want to hurt you.

If you’re scratching your head right now wondering how I’ve gotten this far declaring myself a Skrillex fan and showgoer without immediately following it up with a lot of self-deprecating jokes, well, we’ve been living in a world where dubstep is a “thing” for four years now, and frankly, ain’t nobody got time for that — including Moore. In a Reddit AMA this weekend, he responded to a question about the legions of skeptics who don’t consider dubstep “music” with the blithe, succinct response “Lol… Dunno What I’d say.. i dont really feel like I have to put energy into ppl who chose not to see the musical side in ‘dubstep’…” Moore, who I have heard from countless accounts is one of the kindest, hardest-working people in the industry, preaches a downright posi-core dance music gospel of acceptance that those who have only given a cursory glance to his output might see as contradictory or insincere. But as he told Neil Strauss in a 2012 Rolling Stone profile, “I don’t think I’ll be remembered in a big Michael Jackson, Led Zeppelin way … It’s not about me. It’s about facilitating a good time for everyone.”

A highlight of the record comes at its midpoint with “Dirty Vibe,” a tweaked-and-twerked-out collaboration with Diplo and K-Pop juggernauts G-Dragon of BigBang and CL of the girl group 2NE1. 2NE1 just released its long-awaited second album, Crush, last week, and over the past couple of years has been considered Most Likely to Succeed in that mythical stateside embrace of K-Pop that never quite seems to arrive. “Dirty Vibe” makes me think that the title may actually go to GD and CL in the long run, and that embrace will look much different than pop pundits imagined a couple of years ago. Their willingness to go weird, not their qualities as idols, will win them fans here, and those fans will be listening on music blogs and at festivals, not on the radio. In a way, at this moment, they might have been the perfect match for Skrillex.

"ITS TIME THAT US MEN STARTED RESPECTING TO THE BASIN THAT OUR QUEENS SIT ON! LETS RAISE THE NEXT GENERATION TO HAVE BETTER AIM SO WOMEN DONT HAVE TO PEE & POOP ON OUR PEE!...and IM NOT TRYING TO POOP ON YOUR PEE EITHER! BASICALLY, TO ALL THE FRAT GUYS AND SHITTY DADS, QUIT FUCKING UP THE DEUCE SESH FOR THE REST OF US! BUMP THIS CUT IN ALL AIRPORT BATHROOMS AND FOOTBALL GAMES! FUCK A DRUNK DAD PISSING ON THE GROUND, AND A FRAT BRO TOO HAMMERED TO HANDLE HIS DANGLER! MAN UP AND LEARN DONG CONTROL!...IM OUT!!!" -- Macklemore

Now We Know Why Rust Cohle Couldn’t Keep a Girlfriend