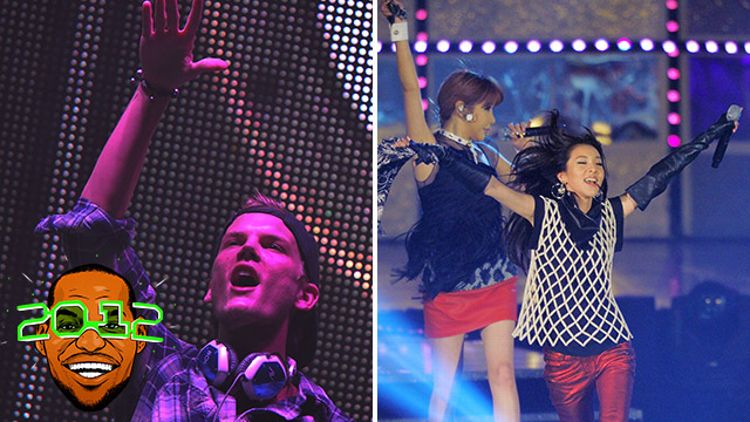 The Year In Music

On February 12, 2012, I happened to watched two events in the span of an hour that wound up epitomizing my year in pop music. I had met up with some friends to watch the Grammy Awards, but about an hour in we started to get a little bored, paused the DVR, and started down a YouTube black hole. My friends were fresh on a K-Pop high — specifically on Girls Generation, generally considered to be the biggest girl group in Korea. We watched a clip from their first Japanese tour — the camera glided over a darkened football-size arena filled with hundreds of thousands of points of light as what looked like a giant, angular circus tent billowed with smoke and changed colors a few times before slowly opening up to reveal nine leggy, immaculate pop divas all clad in white. “Look at that. I don’t know if you can tell how big that is,” Sam said, referring to the gargantuan set piece, but he may as well have been talking about the Girls Generation phenomenon in general. As I watched an impossibly huge arena erupt into a rapturous roar as the band started their first song, I had the strong sense that something huge and important was happening on the other side of the world, something so huge that it couldn’t possibly stay on that side of the world for too much longer.

As if to confirm my suspicions, I was then informed that the group had recently done a quick tour of New York City — their first ever — after releasing their first English-language single, “The Boys.” Now officially intrigued, I leaned forward anxiously as we cued up their performance on The Late Show from a couple weeks earlier. I found myself suddenly sympathetic to this thoroughly modern, manufactured pop militia, and I wanted them to succeed, which was odd, because I hadn’t seen a single piece of evidence that they had individual personalities or quirks or senses of humor or were, you know, human. But I liked the idea of them, I liked the spectacle, and I liked the idea that something that originated in a non-English-speaking country could be so influential.

The girls assumed their perfect poses and launched into the crisp nine-part harmony opener of “The Boys,” the Late Show stage suddenly seeming very cramped and claustrophobic. They performed their signature synchronized choreography in black lacy ensembles without missing a beat, as fellow guests Regis Philbin and Bill Murray (who dressed as a referee and a baseball player, respectively, for reasons I’m not entirely sure of) looked on with slight bewilderment from the couch. I felt a cringe creep up the back of my neck. Why was this not nearly as cool as the Japanese concert video? And I remembered: Oh yeah. This stuff doesn’t work here.

Feeling less than confident about the prospects of this international phenomenon that I had be introduced to, had my mind blown by, and become suddenly skeptical of in the span of 10 minutes, my friends and I turned back to the Grammys, fast-forwarding through the commercials and then much of the awards, which it turned out we didn’t have much patience for when armed with a DVR. We stopped for the performances, gaping with horror at Chris Brown, scratching our heads at Foster the Beach Boys. When we could no longer skip forward, we found ourselves stuck in what looked to be a giant tent outside the Nokia Theatre filled with a far more rambunctious, iPhone-wielding crowd going nuts for the Foo Fighters, who were performing amid bright lights and strobes on one-half of a dual stage. What was going on? Why were the Grammys suddenly doing their best Coachella impression? Then the lights went red, the other curtain dropped, and this happened on the same channel that airs CSI.

This year, two monumental genres with decidedly global pedigrees arrived on our shores and attempted to crack the American pop code, with one enjoying far more decisive success than the other. In the end, electronic dance music (or EDM, and the multitude of genres and subgenres it covers) got a Grammys category, and K-Pop got the single most viewed song on YouTube. One of those is definitely sexier and zeitgeistier than the other, but that doesn’t always result in sustained cultural relevance.

Back in mid-summer, just as “Gangnam Style” was starting to explode, music-heads from every corner of the Internet started to wonder if K-Pop had finally broken through; if the Hallyu wave had survived the long journey across the Pacific. But as we entered the long tail of Psy’s success, as the view counter on YouTube crept toward 1 billion and the talk show and awards show appearances became practically routine, it started to become clear that the more apt metaphor was a massive earthquake whose aftershocks we all braced ourselves for … but then never came. K-Pop got more ink from critics in 2012, and enjoyed a growing cult-like following in the States, but Girls Generation didn’t get their own tent outside the Nokia this year.

In a way, Psy’s success might have jinxed any future mainstream acceptance of K-Pop in the States. “Gangnam Style” was like the triple-backflip a precocious neighbor kid does on his trampoline once: Word gets around the neighborhood, and pretty soon all the other kids are coming over to see him do it again, camera phones in hand. But when the time comes to deliver, he stalls and stalls and eventually tries to distract you with his geode collection — which is also pretty cool, but it’s not going to blow up the same way on YouTube. It’s easy to conclude that language, country of origin, and unfamiliar aesthetics are no longer a legitimate excuse for K-Pop’s inability to sustain and grow buzz; “Gangnam Style” taught us that if a song or act is a hit, it will be a hit, even if we have to Google the lyrics translations. For American K-Pop devotees this holds true; a good hook needs no translation (I’ve had 2NE1’s “I Love You” stuck in my head for two months even though I know about 10 percent of the words).

But there are still plenty of barriers, most of them having nothing to do with the music at all — the highly composed visual aspect of K-Pop, as well as the transparently corporate ways new acts are “grown” and promoted, can seem off-puttingly cynical in a country where we try our best to forget that Taylor Swift’s ascent to fame would have been a lot slower without the financial help of her father. We want to believe our pop stars are all fully formed talents, gifted by some higher power with divine abilities, who only need to be plucked out of that small town in Nebraska in order to shine. (If we see too much struggle to break the Top 10, it’s easy to assume that the artist in question is a false prophet.) The K-Pop system, on the other hand, fully acknowledges that a group or a singer is a highly refined and market-tested product that further bolsters the label’s brand; the appeal is man-made perfection (plastic surgery, all-night choreography rehearsals) rather than equal-opportunity magic (the fat kid with the golden voice on American Idol).

If you look at it that way, EDM’s ability to run laps around K-Pop makes perfect sense, because no other genre right now is more about magic. It’s secular praise music, meant to whip you into a state of euphoria. Despite the signature Swedish stickiness of Avicii’s production, the ubiquitous, endlessly remixed, Grammy-nominated (for whatever that’s worth) track “Levels” already feels thoroughly American, with that earbug of an Etta James sample to boot. It’s the musical equivalent of Coca-Cola — fizzy, sweet, universal — but combined with the structure of Avicii’s shows (one man at the pulpit as the crowd lifts their hands to the sky), the effect is downright evangelical.

But because rave culture is still pretty niche-y in the States, it made sense to hitch a ride to a reliable mainstream standby. This was the year EDM finally shacked up with its longtime flames hip-hop and R&B in what has become a lucrative, occasionally inspired polyamorous triad. This relationship is nothing new (it dates back to that horrible Chris Brown Doublemint Gum ad and before), but this year the influence was documentable — this August, “It” girl rapper Azealia Banks appeared on the cover of Vibe magazine cozying up to “It” dude producer Diplo, in the same issue that the publication Quincy Jones started in 1993 announced that it was officially adding an “Electronic” section. The message was clear: This is what the people want, and we don’t think it’s just a trend. Meanwhile, hip-hop/electronic festivals like D.C.’s Trillectro and Nashville’s With Your Friends Fest started popping up all over the country, continuing the age-old American tradition of saying “OK, Europe, we see what you’ve got going on, but we’re going to do this our way.”

The false start of the 2012 American K-Pop Revolution can be frustrating for those of us rooting for its success, especially as electronic music brushes off the last remnants of its underground status. But there’s a different perspective for every perceived win or loss, and all you have to do is look at thousands of screaming BigBang fans singing along to the “Gangnam”-rivaling party jam “Fantastic Baby” at a megaconcert in Seoul to realize that K-Pop isn’t in any danger of dying out anytime soon. As Americans, we’re conditioned to think that you can’t truly consider something “big” unless it’s successful in our country, but in recent years the center of cultural gravity is a lot harder to pinpoint — 2012 was also the year that saw most of our big summer blockbusters opening in France, Australia, and the U.K. weeks before they came to our multiplexes, for no other reason than that the U.S. box office is no longer the single measure of whether a film is a hit. Likewise, there’s a reason you cringed at the AMAs this year when Elisha Cuthbert informed us that EDM was “the hottest new thing in music.” New to us? Sure, relatively, but then so is quinoa, and the Incas were on that ish in pre-Columbian times. Just like it’s a little ickily ethnocentric to declare K-Pop a non-starter because of its still mostly underground fan base in the States (completely disregarding its complete takeover in Japan, China, the Philippines, and Indonesia), it’s kind of silly to treat the mainstream embrace of EDM as some crowning achievement of legitimacy when the U.K. kids have been on a steady diet of breakstep and Molly for over a decade.

Ultimately, I’m in favor of both EDM and K-Pop’s growing influence — even if they are on two very different scales, and even if not all of the music is my cup of tea — because both signal a growing international influence; a progressive, futuristic mind-set; and because I like anything that sounds like the future. It’s been an exciting, often unpredictable year for U.S. pop because of that, and we’re almost certainly going to see further decentralization of it in the coming years. Does that mean that 2013 will be K-Pop’s year in America? 2NE1’s Will.I.Am–produced album is on its way, and Psy is working with 2 Chainz and Diplo, but even still, I seriously doubt it. Does that mean I will enjoy the music any less? Not at all.

More The Year In Music

See all The Year In Music