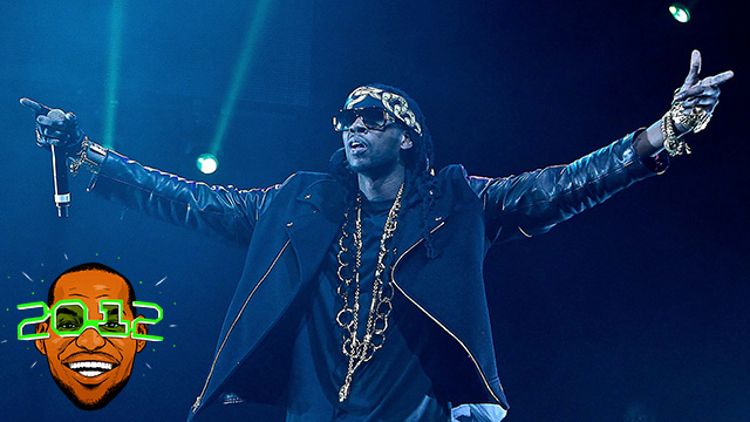 Congrats, reader, on having a productive, successful 2012. I am very proud of you. In honor of all of your accomplishments, here is rapper 2 Chainz’s calendar year, just to bring you back down to earth and remind you that you’re a lazy slacker that probably doesn’t have curly-fry braids, can’t dance, and hasn’t the first notion of what it means to have the busiest, most productive year ever.

Ninety-eight documented singles. That’s incredible. Sure, there was a time period (still happening) when he would work with anyone (Lil Chuckee, Booba, Teairra Mari), but it’s kind of endearing. 2 Chainz doesn’t think he’s too good for anyone, me and you potentially included. The ferocious clip at which Lil Wayne made music in 2007 is well documented, but not even that can touch Tity 2 Necklace in 2012, especially when you couple it all with the fact that this time last year, he was barely on anyone’s radar.

Just to make this point explicitly and aggressively clear, here is a sampling of 2 Chainz’s 2012.

An incredible start to the year. Both men wore sweaters, which was great. Also, this song gave us the triumphant “Similac.” Unlike Chainz, four days into the year may have been TIP’s high point. Debatable. OK, debate over. It was.

Important, because Mr. Chainz completely stole the song from Young. It seemed that with this performance, artists learned from Jeezy’s mistake that putting Tauheed in the middle of a song was a mistake if you would like the song to remain your song. For all intents and purposes, “Supafreak” is a one-verse song by 2 Chainz. As we saw time and time again, either a strong start or a buildup to a giant finish was the formula for best utilizing the Chainz. Also: “Bentley Truck.” When are they going to make it? asked Chainz. When? Another also: beginning his verse with the elongated “2 Chainnnzzzz.” While not the first time, it was certainly one of the more memorable.

March 14: PERFORMANCE THAT I WITNESSED AND MAY HAVE WEPT DURING NO. 1: South by Southwest showcase featuring 2 Chainz, with surprise guests Big Sean and Kanye West

Was magical. At this point, the rumors began truly swirling about where Tity would end up. After this, it looked as if a Kanye collaboration was in the lead.

This happened. You probably missed it.

In a surprise move, Kanye set up 2 Chainz, giving Hair Weave Killer the final verse. Chainz takes the listener back to the original beat, after Kanye changed it in his verse, and proved worthy of the top billing, if for no other reason than the line “Chain the color of Akon.”

April 6: “Beez in the Trap”video released.

Music video GIF of the year? Yes. (Be glad, Tauheed, that Sanchez running into his own man isn’t a music video, or you’d be immediately dethroned.)

Calls himself “Tity 2 Necklace,” which is perfect.

Brings out Kanye West. Kanye West says nothing, but his presence is felt.

Even though Drake’s hook and verse take this song to the next level, subjecting the world to “Black Diamonds, APARTHEID” was the most enjoyable thing I’ve ever experienced.

Easily the parking lot video of the year. While there are a lot of gems in this, probably my favorite is the fact that 2 Chainz had to repeatedly bend down during his verse because he was too tall for the slimmed camera lens. 2 TALLLLL.

June 16: PERFORMANCE THAT I WENT TO AND MAY HAVE WEPT DURING NO. 2: Club Paradise Tour hits Jones Beach, NYC

Again, Chainz is given the last verse and destroys it by his fourth word, “Two Chainz, Four BRACELETS.” The man is a phenomenon, and it’s only June.

The idea of Drake and Chainz hanging out in the video feels right, since they’re on tour together and whatnot. Chemistry feels genuine. 2 Chainz likes jewelry.

Tauheed is given the first verse, mentions the Braves and Falcons, makes me feel like he’s speaking to me. I rarely listen to this song past the first verse. Sorry, Meek.

Everyone wears all white. Chainz’s verse came third instead of fourth, but that’s only because Kanye had to emerge from a spaceship-size Lamborghini. Only appropriate.

Many might disagree, but starting with 2 Chainz and ending with Gucci Mane gives me the chills. Just incredible. Also, 2 Chainz ends his verse with “U-Way,” a nod to the Youngbloodz, which is something to be appreciated.

Is easily the most distinctive album cover of the year. Two chains. 2 Chainz. Get it? This is the first time it crept into my mind that he might be a genius.

One of the few songs of the year that, after the first listen, I figured would be a huge hit.

Strippers are involved in the video. Both Nicki and Tity 2 Strippers love them.

August 14: Based On A T.R.U. Story is released. First two tracks are titled “Yuck!” and “Crack” and I am very happy about that.

August 15: REALIZATION: 2 Chainz’s album can be shortened to BOATS and nothing is the same. This becomes an important day in my calendar year.

September 6: 2 Chainz and Lil Wanye perform “Yuck!” at VMAs. Lots of words are bleeped out. 2 Chainz dances. Things are as they should be.

September 14: G.O.O.D Music’s Cruel Summer is released. In addition to “Mercy,” 2 Chainz is on two other posse tracks, “The Morning” and “The One.” One is OK. One is not. One has Kanye. One has CyHi. Figure it out.

When given the first verse and one of the beats of the year, Tauheed does not disappoint, mainly in the way he begins by listing women’s names and finishing with “Brandy, Moesha.” So great.

The video is set in postapocalyptic Atlanta, and I think 2 Chainz is the interim city council president. I’m completely fine with that. #Tity2Leader

October 9: BET Hip-Hop Awards. 2 Chainz is nominated for 11 awards. Wins four, including the “Rookie of the Year” award, which is wrong but also right.

No one else could deliver this hook as shamelessly and energetically in 2012 as 2 Chainz. The lyrics are just absurd, but he delivers. And you get the sense he’s telling the truth.

October 25: PERFORMANCE THAT I WENT TO AND MAY HAVE WEPT AT NO. 3: Samsung Galaxy SIII launch with special guest Kanye West and surprise guest 2 Chainz.

November 21: 2 Chainz given Source‘s “Man of the Year” cover.

The young boys wear long trench coats. 2 Chainz does not, because he is a grown-up and they are boys.

An extended version of Cruel Summer’s “The Morning” is released with just 2 Chainz. A video accompanies the new verses. Also, we see him in Europe and I think he crashes a wedding? Still unclear.

December 5: 2 Chainz is nominated for three Grammy awards, including rap album of the year. Just incredible.

And there are still 13 days left in the year. For most, that doesn’t mean anything. But for 2 Chainz, that could mean six more songs, two more videos, and an impromptu Kwanzaa concert with Sade and Al Jarreau on the White House Rose Garden on Saturday, because why not?