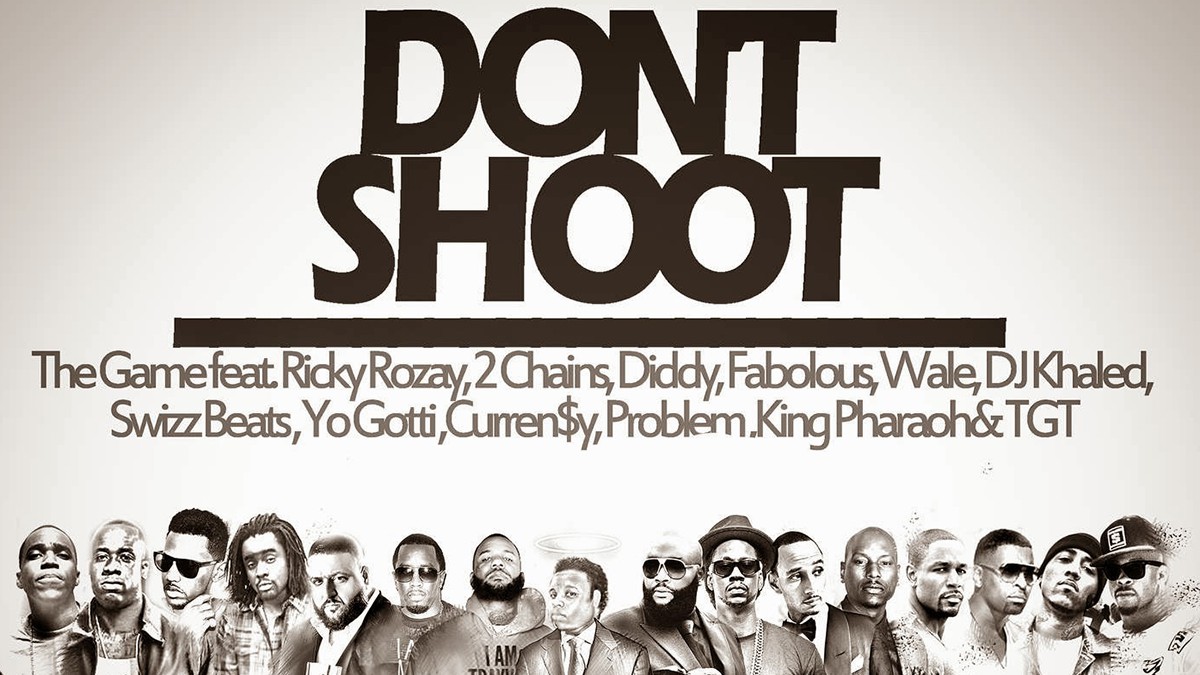 Every morning, for the past 18 mornings, I’ve listened to “Murder to Excellence.”

The song is the climax of Jay Z and Kanye West’s Watch the Throne. Its peak arrives right in the middle of the song, as the story (and the beat) switches from despondent and cautionary to triumphant and optimistic.

It’s not a perfect song. At points, it’s even messy. At the very beginning, Kanye repeats “black-on-black murder” into Jay Z dedicating his verse to Danroy Henry, a black 18-year-old shot and killed by a white police officer in 2010. Some may have mixed feelings about such strong racial commentary in the middle of an album that is largely dedicated to the flaunting of excess. But there are also points of the song that continue to resonate:

[Kanye West]
Is it genocide?
Cause I can still hear his mama cry
Know the family traumatized
Shots left holes in his face about piranha-sized
The old pastor closed the cold casket
And said the church ain’t got enough room for all the tombs
It’s a war going on outside we ain’t safe from
I feel the pain in my city wherever I go
314 soldiers died in Iraq, 509 died in Chicago

[Jay Z]
I arrived on the day Fred Hampton died
Uh, real n​-​-​-​-s just multiply
And they say by 21 I was supposed to die
So I’m out here celebrating my post-demise
If you put crabs in a barrel to ensure your survival
You’re gon’ end up pulling down n​-​-​-​-s that look just like you
What up, Blood? What up, cuz? It’s all black, I love us

Jay and Kanye aren’t sociologists, but both clearly understand society. Neither are race theorists, but each live in a world where race affects them, positively and negatively. What they’re saying occasionally takes irresponsible leaps and sometimes their arguments have holes. But listening to the song continues to feel good. Its existence remains important. Even without the knowledge of their true motives, they sound passionate. And they make you believe them. They might not be giving you what you need to hear, but for the past two weeks, this hybrid protest song, hood tale, and call for awareness has been what I’ve wanted to hear.

Listening to this song on a loop has been a perfect segue into the track released on Wednesday, “Don’t Shoot,” a Ferguson-inspired song assembled by the Game and featuring Rick Ross, Diddy, 2 Chainz, DJ Khaled, Wale, Fabolous, Swizz Beatz, Yo Gotti, Curren$y, Problem, King Pharaoh, and TGT.

I waited four hours before listening. Because I was nervous. That a response to the criticism about the lack of response from mainstream hip-hop artists was getting one giant crew together on one song didn’t help. Because of course they all hopped on one song. Rounding up rappers for an overwhelming megatrack isn’t new to the Game, so of course he used this opportunity to have the ultimate posse track. And of course Khaled is involved. And I’m sure he’s shouting over it somewhere.

Even before I listened, the cynicism was alive. Then I listened. And it was still there.

I heard each verse, and each sounded like they’d taken a different day of Twitter commentary and turned it into eight bars of fed-up-ness. The overriding feeling was insincerity. Because an act like this is something you want to be associated with, selfishly. It’s the idea of being on “the right side of history.”

And because of that, it was easy to focus on the tackier aspects. Because there’s so much to get hung up on. Like the fact that “Don’t Shoot” actually begins with a Khaled speech. The fact that Diddy finds a way to bring up Cîroc. The fact that the faintest mention of the “Maybach Music” drop appears after Rick Ross’s verse. The fact the “it’s murder” sounds eerily close to the Murder Inc. “It’s murda,” which then reminds you of the complicated nature of these rappers doing a song that stems from an act of gun violence.

But I also knew I was being harder on this song because it was hip-hop, something I care about and something that should care about what’s happening in Ferguson. I wasn’t giving it the same benefit of the doubt that I gave other examples of artists coming together for a cause. I wasn’t as rigorous with the 2001 “What’s Going On” cover to benefit AIDS charities and the American Red Cross. But this is essentially the same thing — a bunch of people with a variety of motives, coming together to make a song happen in the name of a cause. “What’s Going On” was Britney Spears, the Backstreet Boys, Fred Durst, Wyclef Jean, Mary J. Blige, Destiny’s Child, and others getting on the right side of history. Saying yes to the right offer to “do good.” And regardless of their motives — since it’s nearly impossible to determine — they were a part of the whole that behaved as if they cared by lending their vocals.

The same is true with the “We Are the World” redux for Haiti in 2010. I don’t know how Justin Bieber felt about the tragedy in Haiti right after it happened, nor have I checked up on him in the following years, but he did the opening Lionel Richie part and, in that moment, was on the right side of history. You can pinpoint one time — forever — when he was a part of something good.

Neither song is as good as the original. You could even argue that the “We Are the World” redux is musically disrespectful, seeing as the original is so flawless. But because it raised money for Haiti relief, the argument against the song’s existence is a hard one to make.

The proceeds from “Don’t Shoot” are going to the Michael Brown Memorial Fund. And it’s confusing whether that changes anything. Does charity provide a pass on the question of motives? And should a charitable donation make you appreciate any effort as just that — an effort? Should you be less cynical because this is all for a good cause?

It’s that same back-and-forth about ice buckets and ALS. Does it begin to feel more and more disingenuous as time goes on? Absolutely. Does it feel like people are doing it just to be seen or to say that they were involved — again, on the right side of history? Of course. But if this song directly routes a ton of money to the family of Mike Brown, it’s hard to denounce its existence.

And in that, I began to find reasons to validate the existence of “Don’t Shoot,” even if the song is no musical gem — a pebble compared to the diamond that is 1989’s “Self Destruction,” a similar collective effort. Because, even with a variety of imperfect lyrical content, there is something important in what they’re presenting, 10 rappers responding to this story in 10 different ways. The Game focusing on the act of going down there, Diddy about nonviolence, Ross about being black, Tauheed about the police, Fabolous about speaking out, Yo Gotti about St. Louis, Wale comparing the response to the ice bucket frenzy, Swizz about the disrespect shown toward black leaders, Curren$y about the lopsided jury, and Problem about his doubt that peaceful protest will change anything.

This isn’t a cohesive song by any stretch — which seems appropriate. It’s 10 different people expressing 10 different points of view, 10 different feelings colliding. It’s a parallel to what’s actually happening in and related to Ferguson, a unified cause that lacks a unified voice. A multitude of opinions, concise and vague, calm and angry, peaceful and aggressive, emotional and practical, researched and unfounded. And a group of people sharing a common desire, but without any clear consensus on how to react. Or what to do.

The song is simply a louder, more well-polished “Hands Up, Don’t Shoot” sign. Or in some cases, “Shoot Back.” And even with ever-lingering cynicism about the origins, the motives, and the players involved, the presentation is representative. It’s imperfect. And one of the reasons hip-hop is important is because of its imperfections. It’s emotional. It jumps to conclusions. And it often echoes your most unrefined, raw, original thoughts and, responsibly or not, broadcasts them for all to hear.