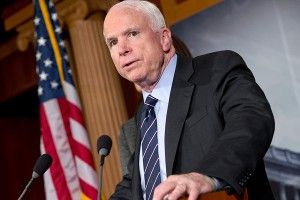 If you guessed “The Presidential candidate that survived five and a half years as a POW in Vietnam,” you guessed correctly. The AP reports:

The movie Zero Dark Thirty suggests the CIA’s harsh interrogation techniques led the U.S. to Osama bin Laden. Sen. John McCain watched the movie Monday night and says it left him sick — because it’s wrong. McCain … has insisted that the waterboarding of al-Qaida’s No. 3 leader, Khalid Sheikh Mohammed, did not provide information that led to the bin Laden’s compound in Pakistan. Yet the movie … indicates that’s how the United States found the al-Qaida leader … [McCain says] the name of bin Laden’s courier, Abu Ahmed al-Kuwaiti, came from a detainee held in another country. “Not only did the use of enhanced interrogation techniques on Khalid Sheikh Mohammed not provide us with key leads on bin Laden’s courier, Abu Ahmed, it actually produced false and misleading information,” McCain said in a speech on the Senate floor … “I do not believe [enhanced interrogation is] necessary to our success in our war against terrorists, as the advocates of these techniques claim they are.”

The torture conversation has been swirling around Zero Dark Thirty for weeks now, and with the movie kicking off its limited run today (it opens wide January 11), that conversation was surely set to blow up a bit anyway. But with McCain, who is of course singularly qualified to weigh in here, speaking up against ZDT, things have certainly gotten more interesting. A staunchly Republican senator decrying Hollywood’s depiction of war — we’ve seen that before. But that the senator is specifically decrying implicit support for waterboarding and other techniques long advocated by conservatives? That’s a new twist.

Boal … was so abrasive that sources say [Jessica] Chastain, who plays CIA operative Maya, once considered leaving the project. (Chastain disputes that, saying [on set] tears resulted from the stress of the prison setting and “the responsibility of playing this woman that I couldn’t talk about.”) What struck some observers, however, was the degree to which the 61-year-old Bigelow, the only woman to win an Academy Award for best director, listened to her far younger and less experienced partner. Chastain denies that a request to meet with Bigelow privately was rebuffed, but at least once, according to an on-set source, filming for the day was halted while Boal, Bigelow, Chastain and the film’s financier, Oracle heiress Megan Ellison, worked to smooth matters over. Ellison, too, was upset at Boal’s treatment of her — surprising, considering she put up $45 million to back the project.

Today, Boal insists his relationships with Chastain and Ellison are good, though he acknowledges some “spirited discussions” on the set. “I’m fully aware of the fact that I can have sharp elbows,” he says. But he notes Ellison and Chastain both enjoyed working with him, adding, “That isn’t to say I’m always warm and fuzzy.”

Going back to The Hurt Locker, Bigelow and Boal’s first collaboration, turned out some dissent as well:

The $15 million film was financed by Nicolas Chartier, who mortgaged his house to help pay for it. Sources say he and Boal clashed from the start over various issues, and Chartier at one point fired Boal, though he quickly was rehired after CAA and Bigelow interceded. “It was his first movie and my first movie, and it’s fair to say we didn’t get along,” says Boal. Nonetheless, Boal says Chartier was interested in working with him and Bigelow on the bin Laden film, though a source close to Chartier says the two have not spoken since Oscar night in 2010. In addition, Chartier, who did not respond to a request for comment, has told friends he produced SEAL Team Six: The Raid on Osama Bin Laden in part to spite Boal. That film aired to little acclaim in November on the National Geographic Channel.

The takeaway from the THR piece is that Bigelow, who hadn’t made a movie since her notable 2002 bomb K-19: The Widowmaker, was perhaps lacking in the appropriate swag at the time of The Hurt Locker, and therefore ceded more than a fair share of control to the blustering Boal. Considering the gender dynamics there, and the paucity of big-name female directors, that’s certainly interesting. On the other hand: he writes and produces ambitious, dope movies, so who cares Mark Boal’s a bit of a jerk?

And if we want another scapegoat altogether, how about Bret Easton Ellis? BEE just apologized for Tweeting earlier this year that Bigelow was overrated because of her looks, writing on The Daily Beast that he went “beyond douchiness.” Then he went ahead and explored his feelings about Twitter for a while. So, yeah. :(

OK, that does it for us! And that’s been our latest edition of This Week In Zero Dark Thirty!