In the Shallow ‘The Canyons,’ Lindsay Lohan Goes Deep 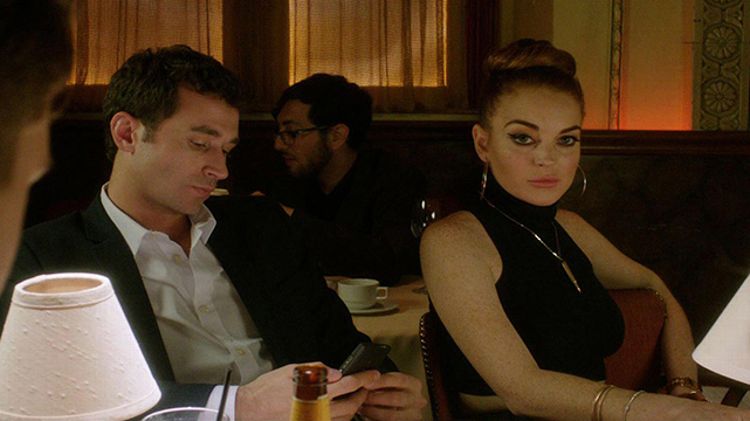 Right off the bat, no, The Canyons is not a very good movie. But it has some great moments that make it worth watching, and it looks mostly gorgeous for a movie costing $250,000. Yes, it’s impossible to look away from Lindsay Lohan in her scenes. She serves up a Norma Desmond vibe that draws you all the way in and then chokes you out. The opening sequence is fantastic on its own merits, a montage of shots of dead movie theaters that announces The Canyons as a digital eulogy for the act of going to the movies. It’s meant to be the antithesis of the clean and sterile ArcLight luxury moviegoing experience. The Canyons wants to bring back the soda stickiness of the floors, the balding patches in the crushed red velvet on the movie theater seats, the tactile grossness of commingling with the masses in pursuit of entertainment, but from the comfort of your own disgusting home (i.e., your mind).

Meanwhile, Lindsay Lohan, like a cronut, is all layers. There is her own public biography lurking just behind her character here. The movie is about voyeurism, reminding us that we are complicit in making Lindsay famous and keeping her famous. The world demanded to see her transform from a presexual young starlet into the exhibitionistic, self-destructive wildfire she became. Now she demands that the audience look at what she made herself into in pursuit of their fickle and flimsy love. It’s a monster movie of sorts. Lohan’s face is bloated and looks strange from fillers that her young face did not really need. She insisted on doing her own makeup, which means that her look never changes from scene to scene. It remains a porno kabuki mask of heavy eyeliner and stripes of dark blush. It really works, for some reason. The other actors never quite get on Lohan’s level, but she is on her own planet as an aging diva straight out of Tennessee Williams. At age 27, she is already on the verge of being washed up as a party girl. Which seems ridiculous, until you remember that Lohan has been washed up and come back 10 times already.

Natasha Lyonne, another child actor who suffered from addiction problems that nearly destroyed her career, summed up the plight of the child star succinctly and nicely on Vulture: “I certainly liked entertaining people and making jokes, but I don’t know necessarily if that’s what your child is prone to that you should necessarily put them in a real working industry at six years old. By the time I was 16, I was already an exhausted cynic.” Lyonne has an exhausted cynic’s voice, and so does Lohan. It’s the distinct Marlboro Red smoking rasp of a person who has lived life harder than most of her peers. Their Baby Herman voices bespeak the sordidness of life behind the velvet curtain, where young actors are regularly exploited sexually and financially, sometimes by their own parents. Children have no choice but to trust the adults around them, sometimes at their peril.

The conversations in The Canyons are vapid but pretty true to life for a certain faction of entertainment business aspirant. They sound like the echo of talk overheard in L.A. coffee shops every day. The aimless blather about upcoming projects, fuck buddies, agents, and juice cleanses that tourists always overhear (because it is usually overly loud) and mistake for being the whole makeup of L.A. And that is the crux of my complicated relationship to Bret Easton Ellis’s work. On the one hand, I respect him for accurately portraying a certain subsection of overprivileged Angeleno (super rich kids with nothing but loose ends), but I also always resented his work, and Less Than Zero in particular, for popularizing an image of L.A. as incredibly shallow, purporting to show an insider’s point of view. But mostly I resented it because I was so deeply in denial that the superficial, fame-seeking, drug-addled, sexually licentious but spiritually empty world he depicted in his work even existed at all in Los Angeles, which, duh, it totally does. He accidentally ended up glamorizing the thing he set out to satirize (50 million Patrick Bateman fans can’t be wrong).

The stakes of The Canyons are pretty small to start out with. A low-budget slasher movie may or may not get made. There is a menacing score by Brendan Canning that creates tension, but the movie could benefit from even more music. There are a couple of scenes at the beginning played without background music or even ambient sound that fall very flat because of it. The film-in-the-film’s producer, Christian (Deen), suspects that his girlfriend, Tara (Lohan), is sleeping with the male lead (Nolan Funk). Tara and Christian are locked at the groins in a Dangerous Liaisons–style sex war. He frequently employs a camera, and keeps upping the stakes. It turns out that Tara is no victim. She wants her sex life just as dark and weird and sexually experimental as Christian does.

The characters of The Canyons confuse money with glamour, love with sex, drugs with confidence, and sexual libertinism with sexual freedom. Unfortunately, the plot hinges on us caring whether Tara and Christian care about each other, and by the time we do the movie’s almost over. Too often The Canyons makes the worst mistake a potential camp classic can make: It is boring. There are some nice visual sequences throughout, but there are far too few memorable lines. While the dialogue leans toward stilted and ridiculous, it’s short on howlers. Sometimes it feels like an art film, and other times it feels like a horror-film take on Melrose Place.

The Canyons isn’t quite gonzo enough to reach its own goals, but we should commend it for trying at all. Compared to the hypnotic nihilism of Spring Breakers, The Canyons‘ attempts to show sexual lawlessness and total debauchery feel downright tame. Like a porno, its biggest problem is that there is very little suspense about who is going to have sex with whom. As soon as it’s established that Tara and Christian like to have group sex, the countdown begins to inevitably watching it take place. Lohan is naked several times in the movie. All the unnecessary artifice Lohan injected into her face looks even weirder in comparison to her natural breasts, which are just as perfect as they ever were, undamaged by the sun or surgery.

There is a spark of something in The Canyons that is very exciting to see. I didn’t know that we would ever see it again. It’s a brief glimmer of the appeal of Lindsay Lohan as an actress. There’s a split second of the alternate-universe Lindsay who worked hard at acting and stayed out of the club. A Lindsay who never went blonde, never had beef, cut ties with Dina at the first sign of trouble (birth?); an impossible Lindsay. Instead we get the Lindsay that exists: tougher and harder, but more vulnerable than ever. She acts her damn ass off, and even if she’s not always on point, she at least earns herself yet another chance. Unlike some of her other previous chances to make good, she deserves this one. We want Lindsay to stay sober and keep acting. However much her star has been dimmed by her issues, there is still something magnetic about her screen presence.