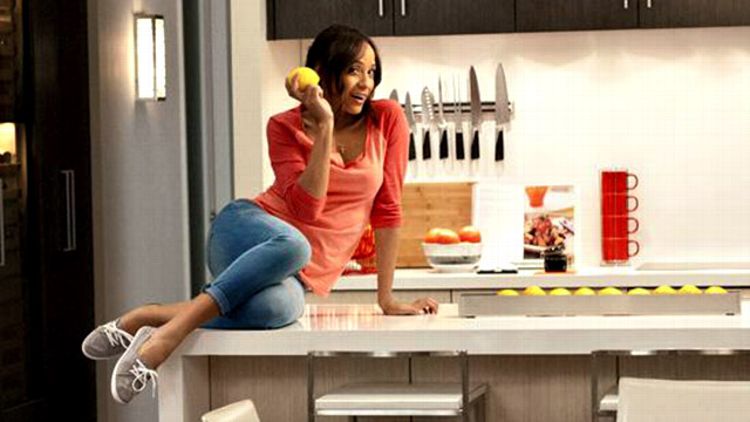 After every episode, they show teaser clips from the next episode. At the end of this week’s, one of the clips they show is the Rich White Woman who’s married to the Rich White Man who runs the prostitution ring. She’s holding a baby she stole from someone. Stolen babies is a go-to move for Lifetime. I mean, they have an actual movie where the actual title is actually Stolen Child.

Note: Just to be clear, stealing babies is NOT OK. Like, I’m saying, I got in so much shit one time because I picked up a kid that wasn’t mine at the play area in the mall. I only got, like, five steps before one dude lost his noodle. He was like, “Oh my God, oh my God, he’s taking that kid!” I was like, “BITCH, NO I’M NOT. I’M THE MEGALODON. WE’RE ALL PLAYING A GAME.”

Anyway, the point: Don’t pretend to be a megalodon. I learned that the hard way.

Marisol got fired by the people she was secret-investigating for the death of Flora, Rosie made love so aggressively to her boss that his heart stopped working, Carmen tried to kill a woman using dog fur because she was jealous of her, Zoila helped the woman she works for try to find a billion dollars because she had all of her money stolen by her money manager, and Valentina was invisible because the Rich White D she’s been chasing disappeared after he started doing cocaine.

Marisol: Marisol runs into Rosie at the grocery store. While they’re there, a younger woman starts calling Marisol’s name, saying that she took her class a couple years ago and that isn’t it funny seeing her now. Marisol cold denies it. Rosie, ever the smart one, goes home and searches Marisol on the Internet (she navigates a laptop computer with the same efficiency that a caveman would an iPhone — I kept expecting her, completely flummoxed, to bend down and start chewing on it). Turns out, Marisol is a prestigious English professor at a university. SHE EVEN HAS A PHD AND EVERYTHING, SO IN YOUR FACE, WHITE PEOPLE.

Rosie: Rosie spends the entire episode (1) quarreling with Marisol about being lied to, and (2) texting the Rich White Man she works for, whom she put in the hospital with her V. During one of her fights with Marisol, she drops her cell phone. Marisol finds it, then uses it to blackmail Rosie into not telling the other maids that Marisol isn’t really a maid and is really there just so she can collect evidence that her son isn’t guilty of murder. At the end of the episode, Rosie gets a package in the mail and it’s a picture from her son, and she’s like “Oh damn. That’s right. I have a son. Totes forgot.” Then she forgives Marisol.

Carmen is the worst.

Zoila: Zoila, no longer playing Whack-A-Mole with the Rich White D her daughter is chasing, is kind of just listless lately. She doesn’t do much this episode besides breathe and have curly hair.

Valentina: Valentina starts the episode by washing a load of laundry with cocaine (I swear to God) and then finding out it was cocaine and then promising the Rich White D (it belonged to him) that she won’t tell anyone and then in the next scene she tells her mom and so now the Rich White D is going to rehab and so that’s probably the end of the season for Valentina. :/

In the Shallow 'The Canyons,' Lindsay Lohan Goes Deep