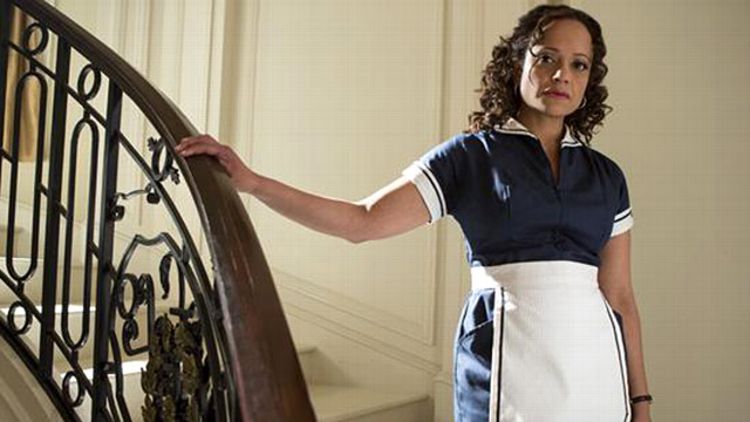 Last week, viewers of Devious Maids were granted a reprieve and so I didn’t have to watch it and so I was like:

But it came back on Sunday night and so I did have to watch it and so then I was like:

Valentina FINALLY got the Rich White D she needed to get to validate her Latina existence. Marisol saw a woman hang herself and then shouted, “OH MY GOD A WOMAN IS HANGING HERSELF.” Rosie felt bad about sleeping with a married woman’s husband because some scientists told some White people that Latinas are capable of experiencing guilt when they’re not too busy using up all of the welfare money so the writers wrote it into the show because that’s a little thing called being real. Carmen Carmened her way through another episode. And Zoila had curly hair.

Valentina: She wore a dress. That’s it. She got the Rich White D last episode so she doesn’t need to talk anymore.

Marisol: Marisol is still fumbling her way through solving Flora’s murder. She found out that the Rich White D that Valentina’s been after was the one that got Flora pregnant, though they never really explained how. No worries though. It’s only THE MOST IMPORTANT PART OF THE PLOT so whatever; just gloss right TF over it.

Zoila: Zoila spent the whole episode objecting that the Rich White Woman she works for is getting remarried to one of her exes. When the Rich White Man confronted her about it, his son (the Rich White D) punched him in the mouth and then whispered something in his ear. Were I to guess, I’d figure he said something like, “You wouldn’t happen to know where I can find a seven-foot-long piece of rope would you, because I’d like to hang myself for having to be on this show.”

Also, WRIIIIIIITERS: Pretty cool how the second time one of the Latinas stands up to one of the Rich White People on the show, she has to be rescued by a different Rich White Person. Pretty, pretty cool.

Me: Hey-o, baby-o.
Mom: What’s up, kid? I watched that show last night.
Me: You did!? OH MY GOD THANK YOU FINALLY WHAT DID YOU THINK CRAZY RIGHT??
Mom: Yes.
Me: I TOLD YOU!
Mom: My favorite part was when they were all sitting around eating tacos.
Me: Huh?
Mom: They were eating tacos and saying “Ay Dios mio” to each other. That was my favorite part.
Me: …
Mom: …
Me: … You didn’t really watch it, did you?
Mom: I did not.
Me: Thanks, mom.
Mom: No problem. Love you.
Me: I love you too. Peace, ruca.
Mom: Bye.

Zoila was at the market and couldn’t quite reach a bag of chips on a shelf slightly out of her reach. A Jewish man walked up and grabbed them down for her. He handed them to her and smiled and walked away. She started throwing up all over and shouting, “OH NO I GOT JEW I GOT JEW” and then one of the Rich White People in the store drove her to a hospital only except it wasn’t really a hospital, it was an immigration detention center that had been painted to look like a hospital. When Zoila realized what had happened, she shrugged, smirked her lips up on one side, then looked at one of the illegal immigrants in the cage with her and said, “Well, you know what they say. Fool me once, shame on Jew. Fool me twice, shame on me.”

(I mean, this scene technically didn’t happen in Sunday night’s episode, but would you have even known if I’d not said otherwise?)