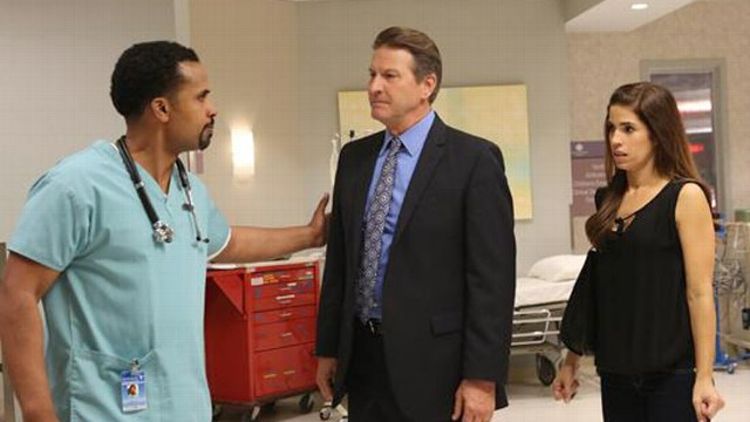 Oh, also, let me state: Yesterday was the first day of Hispanic Heritage Month, and today is Mexican Independence Day, and that’s dope (even if they gave us a fake month). But also Steve Gomez got killed off on Breaking Bad, Devious Maids has been renewed for Season 2, AND Canelo Alvarez lost to Floyd Mayweather. So, I mean, I see what you’re doing, America. I see it and I don’t like it.

Marisol found out who got Flora pregnant. Rosie decided she was going to marry a Rich White Man because a Rich White Woman ran over a different man (or something). Zoila made a frumpy face. Carmen: Who even cares? And since Valentina had finally secured the Rich White D in Episode 10 and she didn’t want to frighten it off, she spent Episode 11 perfectly still and perfectly silent like what you do when a butterfly lands on you and you don’t want to scare it away.

Valentina: Now that Valentina’s earned the right to regularly port the Rich White D, she’s working fervently not to let it go. To wit: The Rich White D found out that Flora (the murdered maid) was killed while pregnant with his baby, so he’s leaving to Africa to feel better about himself (and also to begin filming a spinoff show called Disobedient Diamond Smugglers, which is a show about African people who smuggle diamonds for Rich White People). Valentina has decided to go with him. “Pero, it took me diez episodes to get the Rich White D, mama! I can’t just let it walk out the door and into the V of another minority that needs validation,” is I think how she explained it to her mother. Brown pride.

Marisol: Marisol’s ultrasecret identity was discovered so then the guy who raped Flora sent A FUCKING SNIPER to kill her. The sniper, however, ended up shooting a Pregnant Rich White Woman instead. Ask me where he shot her. Ask me. IN HER STOMACH, bro. Hi, welcome to Devious Maids. Thanks for stopping by. Here’s a large shard of glass. Go ahead and use it to stab yourself in the jugular when you just can’t take any more of this.

Rosie: The Rich White Man who Rosie was having an affair with asked her to marry him. She was like, “No, I can’t, Mr. Spence. You’re married.” He was like, “Don’t worry about it, homie.” So then she was like, “That’s what’s up.” Then she accepted the engagement ring but didn’t want to wear it on her finger because she didn’t want to be disrespectful to the woman that he was still married to. One more time: She accepted a marriage proposal from a married man who she’d been sleeping with but she didn’t want to wear the ring because that’s too disrespectful. That’s a little thing called Latinas having class.

Carmen: Earlier in the season Carmen fell in love with the Black Man Maid that lived in the house with her. However, she told him she couldn’t marry a Black Man Maid because she had designs on a higher station in life. He quit and left to go get fame and power. He came back this episode and guess what: HE’S A MUSIC AGENT. Also guess what: Carmen doesn’t want to be a singer anymore, she just wants to marry a Black Man Maid who will make her happy. If he’d have punched her in the chest, that’d have been fine.

Me: Hey, Bob-a-loo.
Mom: Hey, kid.
Me: So, it’s Monday. This is where I’m like, “Did you watch the show?” Then you’re like, “Yep.” Then I’m like, “OH MY GOD, REALLY?” Then you’re like, “Nope.” Then I’m like, “Dang.”
Mom: I’d agree with that.
Me: Cool, cool, cool. How’s work?
Mom: Fine.
Me: Did you fire anybody today?
Mom: No.
Me: Remember when I worked there and you got mad at me for coming late and fired me? So then the next day I didn’t go to work and you got mad at me and yelled and I was confused because you’d fired me so why was I supposed to be there and you were like, “Guess what? You’re fired again!” But then you still made me go to work.
Mom: [Laughs.]
Me: Moms are so clutch. That was not that great of a time then but I like to think about it now. I’ll talk to you later, babe.
Mom: All right. Bye.

When the Rich White D asked his Dad why he raped Flora, Dad explained it by saying that Flora was a gift to him from his friend, a whore for hire. She’d decided against having sex with him when she’d learned he was the Rich White D’s father. So that’s why he raped her: “Whores don’t get to say no,” he clarified.

I guess that’s not really a “zinger” inasmuch as it’s just a “terrible, awful” thing.