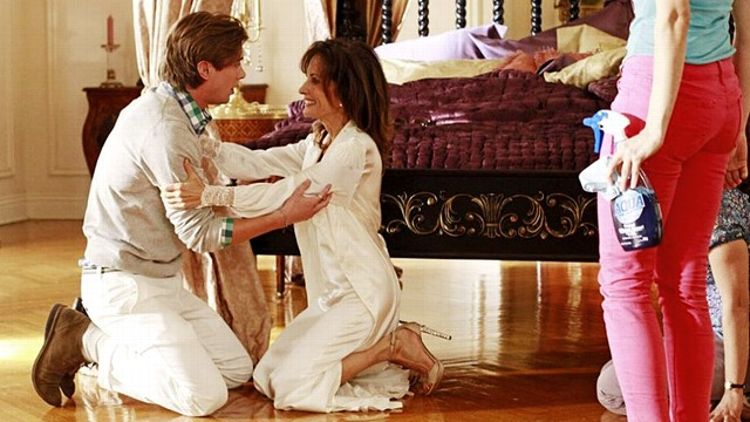 That’s it. It’s over. It’s done. The first season of Devious Maids is finished. I’d like to be joyous about this, but I can’t. I feel like how I imagine it feels to be interviewed by the police after a violent crime has been committed against you. Like, I’m definitely glad that it’s over, but I’m definitely not glad that it happened. Surviving through it won’t make me stronger, it just makes me see the world a little less brightly than I did before. :(

Valentina decided she wanted to follow The Rich White D to Africa, Marisol literally dodged a bullet (and the bullet ended up in a baby that was in a womb), Rosie ended the affair she was having with the Rich White Man she works for but she continued her affair with all the accents she’s employed this season, Carmen was awful, and Zoila was awful too.

Marisol: If you’ll remember, the last episode ended with the Pregnant Rich White Woman that Marisol was working for getting shot in the stomach by a sniper. Like, some people get shot in the arm or in the leg, and that’s cool, but this lady GOT SHOT IN THE BABY. Where’d your wife get shot? “… In the baby.” Boom! Emmy. THAT’S THE BEST SHIT OF ALL. Also: That’s a down-ass baby right there. Like, maybe the most heroic baby that’s ever been. That baby served in the utero Marines or something. Totally selfless. If I take a Cheerio from my baby son he loses his mind. There’s no way he’s taking a bullet for me.

Oh, but anyway: Marisol (finally) figured out that the Rich White Man that raped Flora is the one that killed her and blah blah blah whatever.

Carmen: The Rich Gay Man that Carmen works for asked him to pretend to marry him so the press would stop saying he’s gay. The Black Man Maid that Carmen was about to move in with wasn’t that excited about it. Neither was the one-legged Russian house manager, who, in the scene before, revealed that she was in love with the Rich Gay Man. Carmen wasn’t sure what to do so she spent most of the episode sighing.

Once it’s revealed which Rich White Guy killed Flora, the maids plot on videotaping him confessing to the crime. This doesn’t work out because Latinas aren’t smart enough to pull off such chicanery. Lucky for them, a separate Rich White Guy was in love with Flora and he rescues them because that’s what happens every time one of the Latinas finds herself in an odd situation: She’s rescued by a White person. Just like in real life.