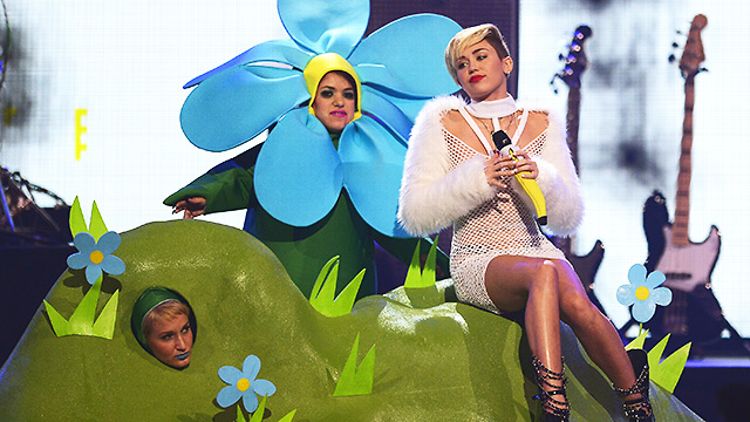 You might have read about the iHeartRadio Music Festival about a billion times over the weekend, prompting you to ask, “What the hell is the iHeartRadio Music Festival, or for that matter iHeartRadio, and why should I care?” The answers are: (a) an annual gigantic multi-day concert that takes place in Las Vegas and features headlining pop acts; (b) a Clear Channel Internet radio station/app that aggregates streaming radio from thousands of stations worldwide; and (c) there is really no reason that you should, but in its three years of existence it has become basically unavoidable because Clear Channel Inc. is a huge monster that owns everything in the universe.

The name iHeartRadio (a spin-off of iHeartMusic) is actually pretty horrible, because Clear Channel is the exemplary evil behemoth that ruined radio as a free-form art medium and turned it into the crappy payola-based system it is today. Since Clear Channel destroyed radio’s character, individualism, and quality, we instead get giant corporate music festivals like this one, hosted by the giant corporation named Ryan Seacrest. Last year’s festival became notorious after Green Day’s Billie Joe Armstrong broke down onstage in a drunken rant after mistakenly believing his time had been cut short. Armstrong peppered his stage banter with bons mots like “I’m not fucking Justin Bieber, you motherfuckers!,” his bandmates smashed their instruments, and Armstrong checked into rehab immediately. That was by far the most interesting and spontaneous thing to happen all night, raising hopes that this year’s festival might be more than the usual parade of super-well-paid headlining acts paying homage to the gods of Clear Channel.

No such luck. Anyway, this year at the iHeartMoney iMeanMusic Festival, the headliners were Katy Perry, Justin Timberlake, and Miley Cyrus. Henceforth, the relative highlights.

Just like Madonna passed the torch down to her, Britney arrived to anoint the newly crowned queen of pop, who is riding high on the success of “Wrecking Ball.” Yes, Miley and Britney share a manager (Larry Rudolph), and therefore a marketing strategy, but let’s pretend it’s just about sisterhood for a second. Britney looks better than she has in an era or two, having finally gotten a makeup artist who understands how to fill in her eyebrows. I’m looking forward to the Miley-Britney collaboration “SMS (Bangerz)” that’s been confirmed for Miley’s album even more now that a supposed snippet leaked featuring Britney rapping (yup) lyrics like “catwalk, slick talk.” GIMME MORE BANGERZ.

During his billionth performance of “Blurred Lines,” Thicke suffered a costuming issue that left his fly open for part of the song and exposed a tiny white sliver of Thicke belly to an effect that was more Al Bundy than D’Angelo. Thicke seemed preoccupied with his zipper during the song, never quite fixing the issue. Good thing he didn’t have to perform naked the whole time, huh?

Doing her new single “Dark Horse” in a kilt and kneepads, Katy had a rough time staying in tune. The sultriness of her second single was undermined by the performance itself, which was kind of … derpy. While she looked hot in a purple leather harness bustier, her dancing and posing seemed really half-cocked, and instead of sexy, it felt embarrassing. She seemed anything but self-possessed. At least when Miley twerks, she commits!

Sure, she twerked with little people and cried onstage during “Wrecking Ball,” but the really provocative moment in Miley’s performance was when she dared to stop twerking long enough to remind us she can really sing. Yes, she was wearing pasties, a Fifth Element–style white mesh dress, and a fur coat, and yes, she was sitting on a person inside a hillside costume while a person in a flower costume swayed behind her. But it’s still a big Vegas show, after all. Miley covered a song by ’70s singer-songwriter Melanie, best known for roller-skating jam (and Rollergirl‘s theme song) “Brand New Key.” Miley has done “Look What They’ve Done to My Song Ma” live before, but the lyrics “Look what they’ve done to my brain / Yeah they picked it like a chicken bone and they think I’m half insane” are even more poignant now that America’s chosen avatar of youth gone wrong decided to sing them at perhaps her peak moment of career control. It was a tiny spark of destiny hope for Miley fans who prefer her folk and country side. Just because Miley is evolving doesn’t mean she has forsaken her past completely. She’s eclectic, y’all.

Justin seems so much more comfortable onstage than he did when he was first premiering songs from The 20/20 Experience and getting his groove back. Maybe it was the ‘N Sync reunion that recalled his muscle memory for popping and locking. As some of the other acts’ performances demonstrated all too well, it is very hard to dance and sing at the same time and be excellent at either, let alone both. It’s not that we want Justin to stop acting entirely, it’s just that we want him to do this … more. But given his propensity for juggling as many things as possible, maybe he can still do both?