After Several False Alarms, We Might Finally Be Meeting the Real Britney Spears 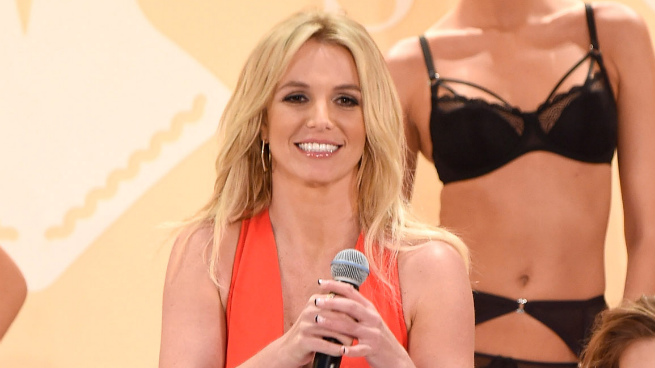 Quietly, stealthily, Britney Jean Spears has been staging a coup of her own empire. It coincided with Spears’s recent breakup from civilian boyfriend David Lucado, in the wake of rumors about a tape of him cheating on her at the club. TMZ claims Britney’s father, Jamie, who has been her conservator for six years, bought the the tape so it wouldn’t get out. He then showed it privately to Britney, who immediately dumped Lucado. Although the tape didn’t go public, TMZ reported on its existence and Britney confirmed by tweeting, “Ahhhh the single life!” that same day. She posted an Instagram video that felt like a selfie, a genuinely candid moment (not a Beyoncé “candid” ’gram moment.) In the video, Britney, with a braid crown and what looks like Las Vegas stage makeup (although who knows), says, “OK, if you’re ever having a really, really shitty day, find someone with shoes with hearts on them” and then points the camera toward a Catherine Keener–ish woman’s Comme des Garçons Converse. Spears says, “Made my day” in a pinched voice like she might crack up or tear up. I have watched this video about a hundred times because there’s something captivating about it. And someone who might be … the real Britney Spears?

Britney has already set up shop in the perfume industry, but she’s now getting into the world of lingerie, debuting the Intimate Britney Spears Collection, which comes in lines with names like “Ambrosia” and “Anemone.” The commercials for the lingerie are a campy delight; Britney intones lines like “I am an art — paint me in pastels” and “I am the dramatic beauty of a city at night.” They are hilarious, and I also watched them all a hundred times. One of the taglines is “This is the art of being a woman and remembering the feelings of a girl,” which sums up the ad campaign: Indulge in your own nostalgia for the era of your sexual awakening, as provoked by TRL-era Brit. Britney is airbrushed to high heaven and shot through gauze, and she looks fantastic. The ads remind us that she has a PhD in being a sexual icon, like Elizabeth Taylor’s “White Diamonds” ads did.

Britneyology is generally divided into two major eras: before and after Britney’s mental breakdown, which culminated in the 2007 head-shaving incident. It feels like we still don’t really know the full story of The Night They Shaved Bald Britney Down. Shady figure Sam Lutfi, who was Britney’s “manager” at the time, claims Spears shaved her head because she was using crystal meth heavily. This was according to the lawyer in Lutfi’s 2012 trial against Britney, which was dismissed. The breakdown era was presaged by a knee injury during a video shoot that led to Britney finally taking a sabbatical for the first time since she’d debuted as a pop star. During that time off, she married Kevin Federline, starred in a reality show, and started to behave erratically. Her weird behavior was a combination of several factors — suddenly having freedom from the rigid schedule she’d been on since her Mickey Mouse Club childhood, postpartum depression and possible drug use, and her genetic mental history rearing its ugly head. Britney was diagnosed as bipolar, put on serious medication after her 5150 hold, and generally saw her freedom reduced, little by little, to what one might allow a child.

The album Spears put out during her breakdown, the keenly titled Blackout, was a career high for her artistry — demonstrating everything about Britney the pop cyborg that we had come to love while also signaling the definitive end of her time as a Lolita. Britney may have been a woman under the influence, but she was a woman for sure, no longer a girl. But, now heavily medicated for her manic spells, she kept being put up onstage so we could compare her to the girl she had been and find her wanting. In truth, all Britney had done was make the grave mistake that any beautiful young girl can make: She grew up into her own person. Unfortunately, she was still the meal ticket for a lot of people, and as she put out albums like Circus and Femme Fatale post-breakdown, she seemed less and less interested in being “Britney Spears.” She openly dreamt about having the freedom to retire from public life, a freedom she lacked now that her father was her conservator. Britney’s family worried that she needed structure to keep her on track, and the Vegas residency felt as much like a way to monitor her whereabouts as like a cash grab for bottle-service money. Spears’s dancing never fully recovered from her knee injury, and her attempts to properly lip-sync, let alone sing, have reportedly been at an all-time low.

Last year’s Britney Jean was promoted as a look at the real, private, secret Britney, but turned out to be a Will.i.am-produced disaster. Britney Jean is the absolute worst of the latter-period Britney albums, although it has already attained a certain camp value as the album in which Britney is content to just phone it in. And her fans were content to let her, since what Brit fans care most about at this point is their icon’s health and happiness. Is coasting making her happy? Let her coast. Even though we expect idols like Britney to rise and rise forever, the reality is that at some point, the ambition usually tapers off. In Britney’s case, having peaked as a teen in front of the entire world turned out to be much more stressful than she made it look at the time. How do you keep topping yourself? Britney never had Madonna’s kind of blonde ambition. When Spears turned out to be a West Valley suburban soccer mom, it felt right, like seeing on Facebook that the hottest girls from high school are now mundanely pretty PTA leaders.

After Britney Jean, even the most ardent Britney fans were content to let her rest on her decades of smash hits and cultural influence in Las Vegas, where pop cultural acts go to be embalmed inside a giant rhinestone. It was also just generally assumed that, having ridden out her contract, Britney didn’t need to put out a new album after Britney Jean until she really wanted to. This week, insiders leaked that Britney was apparently recording new songs to put out with the best songs cut from Britney Jean (with Blackout producers Danja and Darkchild) as an EP or album, and hoped to “pull a Beyoncé” — i.e., release the new record without any advance promo. On her personal Instagram account, of which Spears has seemingly taken control, she posted pics of a “Girls weekend in Vegas!,” and onstage at her show, she made unscripted comments for pretty much the first time ever, referencing her recent breakup and talking about how excited she was to be single again. Between songs she said, “Everyone knows my boyfriend cheated on me. But the best thing about your boyfriend cheating on you is that you get to have a one-night stand!” And so began the new era of Britney: Cuteney, Carefreeney.

Brit has never really stopped promoting the Britney brand, even during her downtime, but something changed recently. She looks genuinely happy to be there, not checked out. And she has unleashed the rampantly goofy side of her persona, which always took the edge off her otherwise intimidating sex appeal, doing a Woody Woodpecker imitation, laughing really hard doing a Jimmy Fallon skit, and genuinely promoting the shit out of her lingerie brand, which she told GMA has been in the works for a decade. Her Southern vocal fry is in full effect; she admits that many times she wakes up and doesn’t feel like doing the show but has to. But that is what makes the new Britney different from the old one. She is no longer the physical technician she used to be, but the less she relies on her body, the more she comes to trust her sense of humor as the backbone of her brand. And her humor isn’t a defense mechanism or jaded reflex. She’s as openhearted as she’s ever been, even after several cheating boyfriends. She told an interviewer: “The perfect first date is going to the beach and having a picnic and going home and watching a really cool movie and then a great first kiss.” And that’s Britney for you — her perfect date sounds just like a great Britney Spears song. She’s still the cute, sweet, charming goofball from Louisiana she’s always been. This is the art of being a woman and remembering the feelings of a girl.