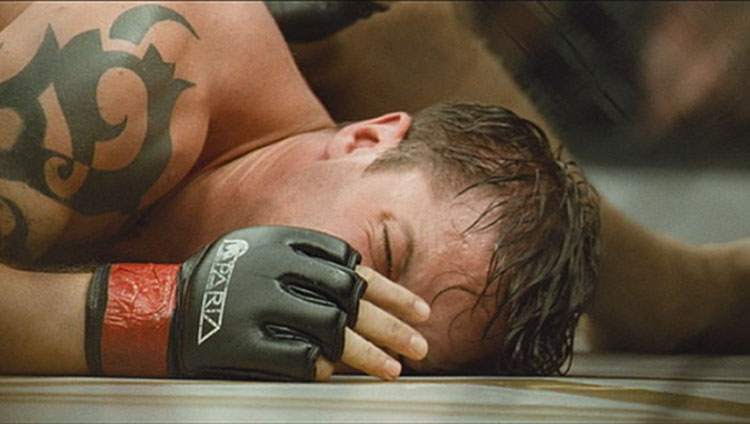 As an actor, Tom Hardy does many things well.

Accents, for example. Hardy’s accents are mealy corruptions of how people talk. Every Hardy character is unique in that nobody has ever spoken like him before. Sean Fennessey called one of Hardy’s voices “cartoonishly affected and yet weirdly enchanting”; they’re like punk-rock shows performed by children. We already know that The Drop, released this Friday, will provide another entry in that strange canon, even if the film doesn’t live up to the lofty heights set for it by the attachment of Hardy’s name and those of James Gandolfini and Dennis Lehane.

He’s constantly getting the shit kicked out of him.

It’s easy to forget that, pre–Dallas Buyers Club — pre-this — Leto was mostly known for getting pulverized like dough in film after film. For proof, enjoy this five-minute-long YouTube supercut of Leto being shot, beaten, electrocuted, stabbed, and generally rendered unto oblivion.

Post–Jordan Catalano, Leto’s willingness to die became a strange asset. Not every actor enjoys the idea of his own violent death onscreen, much less variations on it spanning, oh, a dozen films. Leto seemed to relish the endings his characters met.

Generally, Hardy has about as much in common with Leto as he does a packet of Beer Nuts. But in this, he’s similar: Through most of his major film roles, which span only about six years, he’s shown himself eager to embrace a less conventional version of masculinity than the one that’s thrust upon most actors of his physical beauty and charisma. The dudes of the great podcast Filmspotting highlighted his penchant for emasculation in their most recent episode. And I’ll take it one step further: In his films, Hardy often embodies figures who aren’t just emasculated — their manhood is deconstructed fully, sometimes to be reassembled, sometimes not.

The highlight of this, in my mind, is his role in Gavin O’Connor’s criminally underappreciated Warrior, the best sports movie of the last decade. In Warrior, a comically muscular Hardy plays an Iraq vet driven into a winner-take-all MMA tournament by a mix of berserker mania and self-destructive ennui. We expect these sorts of films to be violent — MMA is violent — but in the crucial match, Hardy’s body is treated like a crooked kid treats a doll. You’re sort of shocked his character survives at all, much less performs the way he does, and his rage becomes a foreign thing: It successfully reaches the point of incomprehensibility.

The hits go on. In Tinker Tailor Soldier Spy, he’s a disgraced MI6 operative, pathetic and groveling; the memory you leave the film with is one of Hardy diminished underfoot.

In Lawless, John Hillcoat and Nick Cave’s spectacular screwup, he’s a bootlegger named Forrest Bondurant who wears cardigans straight out of GQ and is rumored to be invincible, a rumor that is only reinforced when he survives someone slitting his throat. Forrest is almost a caricature of the Hardy archetype, so physically dominant that he cannot be killed, but so emotionally and psychologically impotent that Jessica Chastain, who almost seems to have been willed into being by the male gaze, has to undress and then force herself upon him.

In the hands of many actors, Forrest would be a golem, straight-faced and unintellectual; Hardy plays him like a castrato who grew up to be Thor.

And then there’s Bane.

This was a circus trick for Hardy, yet still the best part of The Dark Knight Rises. (Hardy was initially even harder to understand than he is in the finished product. If Nolan wanted to really be great, he would’ve let Hardy slur all his lines into sleet.) That he takes inhuman amounts of corporeal abuse from Batman is almost beside the point — that voice is enough of a signpost of spiritual abyss.

So far, 2014 has been more of this: You spend the entirety of Locke watching Hardy, and only Hardy, as he portrays a character who built the Platonic ideal of a masculine life to obscure his father’s failures and then sees it collapse in the space of a 90-minute drive down an English highway. In place of tangible damage, Hardy sports a nagging head cold, blowing his nose throughout the film so frequently that you start feeling in your own pocket for tissues. And based on The Drop’s trailer, we at least have to look forward to the indictment of Hardy’s masculinity by Gandolfini, an actor who knew something about such issues onscreen. Will Hardy get demolished? Quite possibly. At least bet money that he’ll cry.

After Several False Alarms, We Might Finally Be Meeting the Real Britney Spears