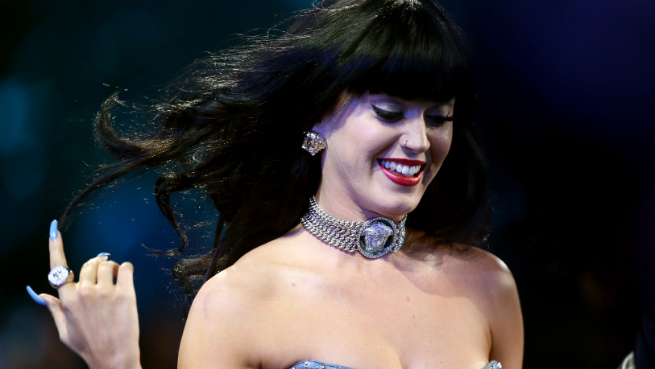 Finally, a Taylor Swift interpersonal drama we can actually believe! Rolling Stone published a profile of T-Swift, and she is quoted thus:

“For years, I was never sure if we were friends or not,” she says. “She would come up to me at awards shows and say something and walk away, and I would think, ‘Are we friends, or did she just give me the harshest insult of my life?'” Then last year, the other star crossed a line. “She did something so horrible,” Swift says. “I was like, ‘Oh, we’re just straight-up enemies.’ And it wasn’t even about a guy! It had to do with business. She basically tried to sabotage an entire arena tour. She tried to hire a bunch of people out from under me. And I’m surprisingly non-confrontational — you would not believe how much I hate conflict. So now I have to avoid her. It’s awkward, and I don’t like it.”

That was Act 1. Katy Perry, otherwise unprompted, seemingly responded with a tweet:

Watch out for the Regina George in sheep's clothing…

What a genius move from Katy. She managed to shade Taylor in the most Internet-friendly way: with a Mean Girls reference. The only strategy that would have been more impressive would have been working in a cat meme, which would have been particularly personal given Taylor’s well-documented affection for felines.

TMZ reports that this feud erupted when three dancers from Taylor’s tour quit to provide backup for Katy instead. Apparently they had only joined the Red Tour to fill time until Katy hit the road for her Prismatic Tour. “Page Six” says their tension began even earlier, when Katy started dating Taylor’s ex-boyfriend John Mayer. Taylor explicitly says the feud was about business, but maybe it’s really both. This is a fun one, so let’s hope for Act 3.

Expecting Mother of the Week: Catherine, the Duchess of Cambridge

In a way, I feel bad for the tabloids of the United Kingdom. What will they write about now that Kate Middleton is actually pregnant again? After months (years?) of mostly unfounded speculation, Clarence House announced that baby no. 2 is on the way. Much like last time, the royals had to issue a statement because “acute morning sickness” had forced her to cancel several public appearances. Prince Harry is hoping for a girl this time, assuming she’d be a challenge for Prince Wills.

Hospitalized Celebrity of the Week: Kanye West in Australia

Kanye West is on tour in Melbourne, Australia, right now, and he was rushed to the hospital yesterday. While initial rumors suggested he’d had a seizure or was on the verge of seizing, apparently he just had a migraine. When celebrities go to the hospital citing fairly mundane afflictions, it’s usually a cover-up. Exhaustion, dehydration, etc. But in the case of Kanye, everything he does is already highly dramatic and inflated beyond proportion. Why should he approach headache treatment any differently? He was released in time to perform at his scheduled show, so it can’t have been too serious.

The weekend after Labor Day was a big one for surprise weddings. Neil Patrick Harris used Twitter to announce that he and long-time partner David Burtka had finally wed. Fortunately, Kelly Ripa attended and divulged the details on her show. They rented a castle in Italy and Elton John performed. Their daughter, Harper, was the flower girl, and her twin brother, Gideon, demanded to be the orange boy, handing out oranges to all the guests. Brad Pitt and Angelina Jolie must be pissed that one of their kids didn’t think of doing something so adorable.

Meanwhile, in America, Fran Drescher married Shiva Ayyadurai, who holds the patent for inventing email. They were introduced by Deepak Chopra, of course. Ayyadurai actually holds the patent for EMAIL, which is different from lowercase email. His was not the first electronic messaging system, but it was the foundation for the format we currently use — the one that closely mimics traditional paper letters and mail. If Drescher could have foreseen the proliferation of Internet and email usage, Ayyadurai would have been a great character to distract Fran Fine from Mr. Sheffield on The Nanny. Can’t you hear a stupefied Charles Shaughnessy, sitting in his home office/study, questioning the very notion of electronic communication? Fran would have tried to explain EMAIL to him, and it would have turned into one of those slapstick moments that sustained the show.

Was anyone aware that the Woz and Serena were such close pals?

Apparently Caroline wasn’t taking her loss too badly, because the above photo was posted the same night that Serena beat her in the U.S. Open final. In fact, Caroline has been Serena’s running mate in New York this week. They stayed out until 3 a.m. Saturday, also partying with model (and Real Housewives of Beverly Hills daughter) Gigi Hadid and Nick Jonas. Apparently their partying was so thorough that Serena canceled all of her Monday morning-show appearances. She recovered by Monday evening, though, because she and Woz were back at it. The modern-day Thelma and Louise helped Chris Bosh celebrate his new line of ties.

The real winner here, though, is Wozniacki. Sure, she lost the U.S. Open, but in her ongoing semi-imaginary post-breakup competition for overall success with Rory McIlroy, she made up some important ground this week. First of all, I think we can all agree that Wozniacki seems like a solid hang, or, at the very least, that she can hang. Rory’s Irishness had given him an advantage in this category. Professionally, it’s difficult for her to keep up considering that he is amid an incredibly impressive string of victories and has the potential to be an all-time great golfer. But Caroline will not go gently into the good night. Caroline has put her ex on blast, criticizing him for making the breakup so public and for being so short. She hopes to date someone tall so she can wear high heels. There was nothing stopping her (unless Rory had some rules we don’t know about), but I suppose she felt uncomfortable given that she is 5-foot-10 and he is 5-foot-8. He may have more earnings and trophies, but at least she’s got Serena and, for this week, the press on her side.