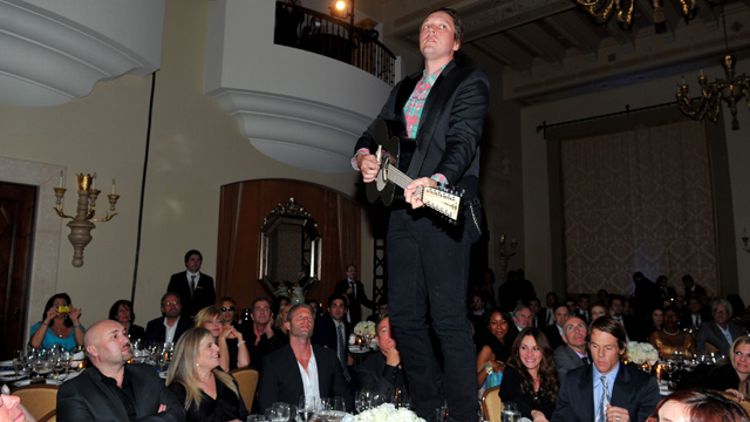 Last week, Arcade Fire began rolling out an advertising campaign for its upcoming album — which either doesn’t have a title yet or doesn’t have a title that’s been announced — as well as the mystery album’s first single, “Reflektor.” The plan all along was to unveil an Anton Corbijn–directed video for “Reflektor” tonight at 9 p.m. However, because this is the Internet, a carefully plotted-out series of commercials promoting the presentation of another, fancier commercial is bound to be fouled up somewhere along the line. Sure enough, audio of a seven-minute song that appeared to be “Reflektor” was discovered by a Pitchfork reader on Saturday. (It has since been removed from Bandcamp.)

And now (as in just now), an interactive “Reflektor” video directed by Vincent Morrisset has premiered online, where you can hear the song in its entirety. Pitchfork reports that the video was filmed in Jacmel, Haiti, and allows the viewer to manipulate the visually stunning images. Check it out here. (It was also just announced that Arcade Fire will appear on the season premiere of Saturday Night Live. Big news day for these guys!)

So: Is the song any good? I’d say it’s pretty good, though I’m curious to see whether it’s, ahem, a reflection of a boldly different Arcade Fire record or an outlier on an otherwise routine Arcade Fire record that the band wants us to think is a boldly different Arcade Fire record. Again, this being the Internet, “Reflektor” is already getting an overly thorough examination for clues about what lies ahead. Here are three narratives about the Arcade Fire album (which may or may not prove to be actually true) that I suspect will be spurred on by “Reflektor” in the days and weeks leading up to the record’s October 29 release.

1. Arcade Fire has finally loosened up and discovered syncopation

In 2007, New Yorker music critic Sasha Frere-Jones wrote a much-discussed article about how indie rock bands in the ’00s had supposedly abandoned “black” music influences, and used Arcade Fire as his Exhibit A. He compared Arcade Fire unfavorably to the Clash, which by its fourth album, Sandinista!, had decided “it was finished with punk rock” (i.e., “white” music, to use Frere-Jones’s binary terminology) and moved on to “dub, funk, rap, and Motown interpretations, along with other songs that were indebted — at least in their form — to Jamaican and African-American sources.” Arcade Fire, meanwhile, was sticking with Wonder Bread and mayonnaise as far as Frere-Jones was concerned.

“As I watched Arcade Fire, I realized that the drummer and the bassist rarely played syncopated patterns or lingered in the low registers,” Frere-Jones wrote. “If there is a trace of soul, blues, reggae, or funk in Arcade Fire, it must be philosophical; it certainly isn’t audible.”

While “Reflektor” can hardly be described as “black”-sounding — its clubby disco flourishes are decidedly European — it certainly features a lot more syncopation and “low registers” than is normally associated with Arcade Fire. (It should also be pointed out that Arcade Fire has finally arrived at the “experimental Sandinista!-esque fourth record” place in its discography.)

This weekend’s leak was preceded by reports that Arcade Fire previewed its forthcoming LP during a surprise gig last Wednesday at a Montreal salsa club — local music blog The Main likened the new material to Talking Heads and David Bowie, describing it as “unexpectedly dance-oriented, due to the upbeat rhythms of conga drums and electronic flourishes alongside their most poppy sounds.” (Spin believes Arcade Fire will be back at the same club under the name “The Reflektors” for a concert this evening.) So, before anything else, Arcade Fire have at the very least found a way with “Reflektor” to retroactively stick it to a music critic with a dubious theory about their music.

When it was reported that the former LCD Soundsystem mastermind was producing the new Arcade Fire record, some might have suspected that the follow-up to The Suburbs might take the band in a funkier direction. But I’m not sure anyone could’ve predicted just how profound Murphy’s influence would be, which — based on this one song — seems to be quite profound. At the risk of being a touch reductive, “Reflektor” sounds more like LCD’s last album, 2010’s This Is Happening, than like anything off of The Suburbs. The slippery bass and drum sounds, the percussive accents, the vintage synths, the ’70s art-punk vocals — Murphy’s presence looms so large on “Reflektor” that he practically seems like a member of the band, à la Eno with the Talking Heads in the late ’70s.

I first saw this suggestion floated by music critic Matthew Perpetua on Twitter, though it also crossed my mind when I viewed one of Arcade Fire’s new promo photos, which looked like a sort of homage to one of the many images on Achtung Baby’s iconic collage cover. Arcade Fire is presently in a position similar to U2 after The Joshua Tree — it’s a Grammy-winning arena-rock group that’s poised to become the most popular ex-underground rock band of its generation, even as its signature heart-bursting earnestness has been usurped by Mumford and “hey!” folk bands. A record that co-opts hip, dance-oriented sounds while also producing a memorable Bic-waver or two could be exactly the right move for Arcade Fire in 2013.

Or not! Who really knows at this point? After all, everything I just wrote about this Arcade Fire LP that I haven’t yet heard also applies to the last Coldplay record. (Except Coldplay got the real Brian Eno rather than a proxy to help with 2011’s Mylo Xyloto.) Either way, “Reflektor” definitely makes me curious to hear more.

UPDATE: And now the official, Anton Corbijn-directed video for “Reflektor” has arrived: