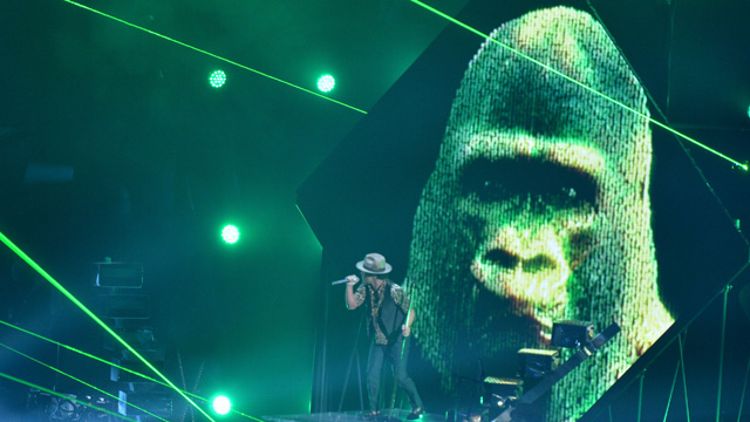 The Super Bowl halftime show is a pop institution, growing from its humble roots (your 1967 debut performer: the University of Arizona marching band!) to host wondrous curios (1989: “[Magician/impersonator] Elvis Presto, South Florida–area dancers, 3-D effects”) to being the leering, untamed spectacle we know and fear today. But for our purposes, we’re mostly concerned with the post-Nipplegate era.

In 2002, with ’N Sync (plus Britney, Aerosmith, Mary J. Blige, and, for good measure, Nelly), Justin Timberlake played nice. Two years later, he showed the known universe, and possibly beyond, a pretty good view of Janet Jackson’s right boob. Since then, the NFL has gone staunchly, proudly — and most importantly, effectively — conservative. Your next six Super Bowl performers: McCartney, the Stones, Prince, Petty, Bruce, and the Who, as sterling a run of unimpeachable legacy acts as could be imagined. 2011: a questionable toe dip into modernity, with the Black Eyed Peas. 2012: back to the unimpeachable, with Madonna. 2013: Beyoncé — yes, as relevant as ever, but also already canonized. And, announced over the weekend, 2014: Bruno Mars. Fuckin’ Bruno Mars.

At first glance, it’s a bit confounding: Has that impish fellow, with those preternatural mimicry chops, really cracked the rarefied air of our Super Bowl halftime? Look at it practically, though, and it starts to make sense quickly. Simply: We ran out of old people. Guns N’ Roses probably isn’t getting that call. AC/DC definitely isn’t (even though the former could really be something, and the latter would, indubitably, shred). As much as we scream and stomp our feet, Led Zeppelin’s still not reuniting. The Eagles fit the bill; maybe later on? From the less wizened: Coldplay? Mumford & Sons? Probably inevitable, too. But the Super Bowl halftime show is supposed to be an exuberant bout of technicolor mania. And looking at your options like that, all of a sudden Mr. Mars gets a whole lot more palatable.

Because, of course, the halftime show’s also supposed to be a carefully controlled exuberant bout of technicolor mania. And if there’s one thing that defines Bruno Mars, it’s professionalism. A slick, sterile, soulless professionalism. Reviewing his first album, Doo-Wop & Hooligans, New York Magazine’s Nitsuh Abebe, quite subtly, nailed Bruno to the wall:

He grew up singing in a family band and impersonating Elvis, and graduated from there to impressing girls at school, something he mentions a decent amount. In one interview he explained the puppy-eyed quality to his songs by saying, “I blame that on me singing to girls back in high school.” In another, explaining the trouble he had breaking into the music business, he circled back to it: “I was always like, girls like me in school” … On one hand, he takes entertaining young pop fans — making the emotional connections others might find corny — seriously. On the other, it also feels like he’s just trying to charm you. Like he’s running game. Like he’s just being cute enough to impress some girls at lunch. Like he’s the child singer who knows a few adorable moves will make the world open up and say awww.

Imagining this man in a meeting with the NFL money people, I see an all-encompassing hurricane of impeccable glad-handing and the glinting promise of a rare, beautiful unicorn: a pop star who’ll do what he’s told. Surveying the field before this weekend’s announcement, I’d have bet good money that Bruno Mars was a few years away from attaining Super Bowl status (say what you will about the Black Eyed Peas, but they earned that spot, one cloying, crushing single at a time). In the post-Nipplegate era, though, we can’t overlook how coveted a commodity simple reliability is.

So here’s where we’re at: There is little chance that Bruno Mars, consummate professional, will turn in anything more than steely-eyed competence at the Super Bowl. There is also no doubt that Bruno Mars, consummate professional, will expend every last ounce of brain matter to make his Super Bowl gig something more than that. And so maybe, somehow — leaping offstage, arms outstretched to the heavens, and dissolving, midair, into 10,000 fluttering butterflies? Showing us his right boob? — he’ll just go ahead and pull it off.

Can We Just Take a Second to Show You What [Not David Mamet] Was Wearing at Fashion Week?