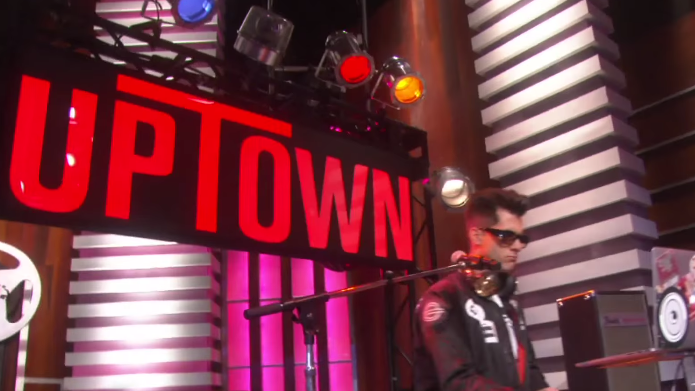 “Uptown Funk” just concluded a historic run. It sat atop the Billboard Hot 100 for 14 consecutive weeks, tying for the second-longest reign in the chart’s history. The other songs that earned the same distinction are “I Gotta Feeling” by the Black Eyed Peas, “We Belong Together” by Mariah Carey, “Candle in the Wind 1997”/“Something About the Way You Look Tonight” by Elton John, “Macarena (Bayside Boys Mix)” by Los Del Rio, “I’ll Make Love to You” by Boyz II Men, and “I Will Always Love You” by Whitney Houston. The only song that held on to no. 1 for longer is “One Sweet Day” by Mariah Carey and Boyz II Men, which stayed on top for 16 weeks. That song, if not canonical, is at least iconic. You’ve got Mariah Carey looking angelic in a white crop top, jean shorts, and canvas sneakers; the dulcet tones of peak Boyz II Men; and so much airplay that the song was inescapable.

That ubiquity is associated with all the songs I just listed, but a few of them were also associated with indelible pop cultural moments. Wade Boggs led Yankee Stadium in a group “Macarena.” Princess Diana’s death is tied to Elton John’s rewriting of “Candle in the Wind.” Whitney Houston achieved goddess status with her song from The Bodyguard. “I Gotta Feeling” was played at every bar mitzvah for a solid two years so the crowd could shout “Mazel tov!” together. Here in 2015, we’re coming off a four-month stretch that included the College Football Playoff, the Super Bowl, the NCAA tournament, the opening weeks of wedding season, and NBA All-Star Weekend. “Uptown Funk” was TNT’s unofficial song for the last one, but doesn’t a song this catchy deserve more than cable-only airplay? The song is still waiting for its moment.

“Uptown Funk” is essentially a perfect pop song. It’s as if Mark Ronson listened to the entirety of his album, realized that Michael Chabon’s lyrics were too impenetrable for most of his audience, and thus enlisted his old pal Bruno Mars to create a song tailor-made for the Top 40 crowd. They’d already worked together on Mars’s smash “Locked Out of Heaven” and a few other tracks from Unorthodox Jukebox. There are not many lyrics to learn (and you’ve likely heard some of them elsewhere), so you need only three or four listens to confidently sing along. It doesn’t matter that the lyrics don’t have a compelling narrative, because you’re too busy bopping along to the drums. Right now, Top 40 radio is filled with plenty of narrative-heavy songs from Taylor Swift, Ellie Goulding, and the rest of their ilk, anyway. Ronson and Mars are filling a need for an upbeat song that doesn’t make you think too much, or at all. It’s a tune about feeling good, drinking liquor, and letting your freaky flag fly. It’s about having fun, which is exactly what Ronson, Mars, and the electric backing singers/dancers do each time they perform the jam. The crew have performed live on essentially every major TV platform, but none was more energetic than the rendition on Ellen.

Bruno Mars, though officially a solo act, derives power from his hype men. His backing band became a staple of his stage presence for the Unorthodox Jukebox tour. For all performances, including the underappreciated 2014 Super Bowl show, he surrounded himself with six musicians blessed with the ability to rhythmically march and sway while playing their instruments. It’s an impressive feat, and I challenge anyone to find a more captivating onstage backing band. These guys radiate vibrancy. The “Uptown Funk” bunch, though ebullient in their own right, are slightly less cool without instruments and slightly more confusing. Wait, they’re really just here to sing?

Mars may be a natural stage presence, but one has to wonder where Ronson fits in to this display. Despite his bona fides and the fact that he cowrote this song, he appears here as the premiere hype man, DJing out of frame while Mars and the backup singers give the song a face. It was probably impossible because there are egos involved, but Ronson may have been better off making it solely a Bruno Mars song. The music is a testament to their potency in the studio, but Ronson is not filling the superstar role the way he needs to for total pop music domination. On that same Ellen episode, Mars has to show Ronson the proper way to hype an album.

Even though everyone knows “Uptown Funk,” it remains an eminently catchy song rather than a dominant one. I’m not sure we’ll look back at its time atop the Billboard Top 100 and think of it as era-defining the way that some of the others in its class have been memorialized. The rest of Ronson’s Uptown Special lacks the radio-ready quality that makes “Funk” easy to take for granted, and thus the song will likely stand alone as Ronson’s only hit single. Six months after its release, the “Uptown Funk” moment will probably never come. We’ll just have to continue living in a world where Bruno Mars’s talent as a consummate performer goes underappreciated, while Mark Ronson will have to bask in his riches and accolades if not public adoration. We’ll probably keep hearing “Uptown Funk” for years to come as marching bands and wedding bands cover it, but the true glory of its pop perfection may never be appreciated. “Uptown Funk” is underrated.

‘The Juliet Show': Charlamagne Tha God on the NBA, ‘Empire,’ Tidal, and More