A Viewing Guide for the Dull, Disjointed Arcade Fire Documentary 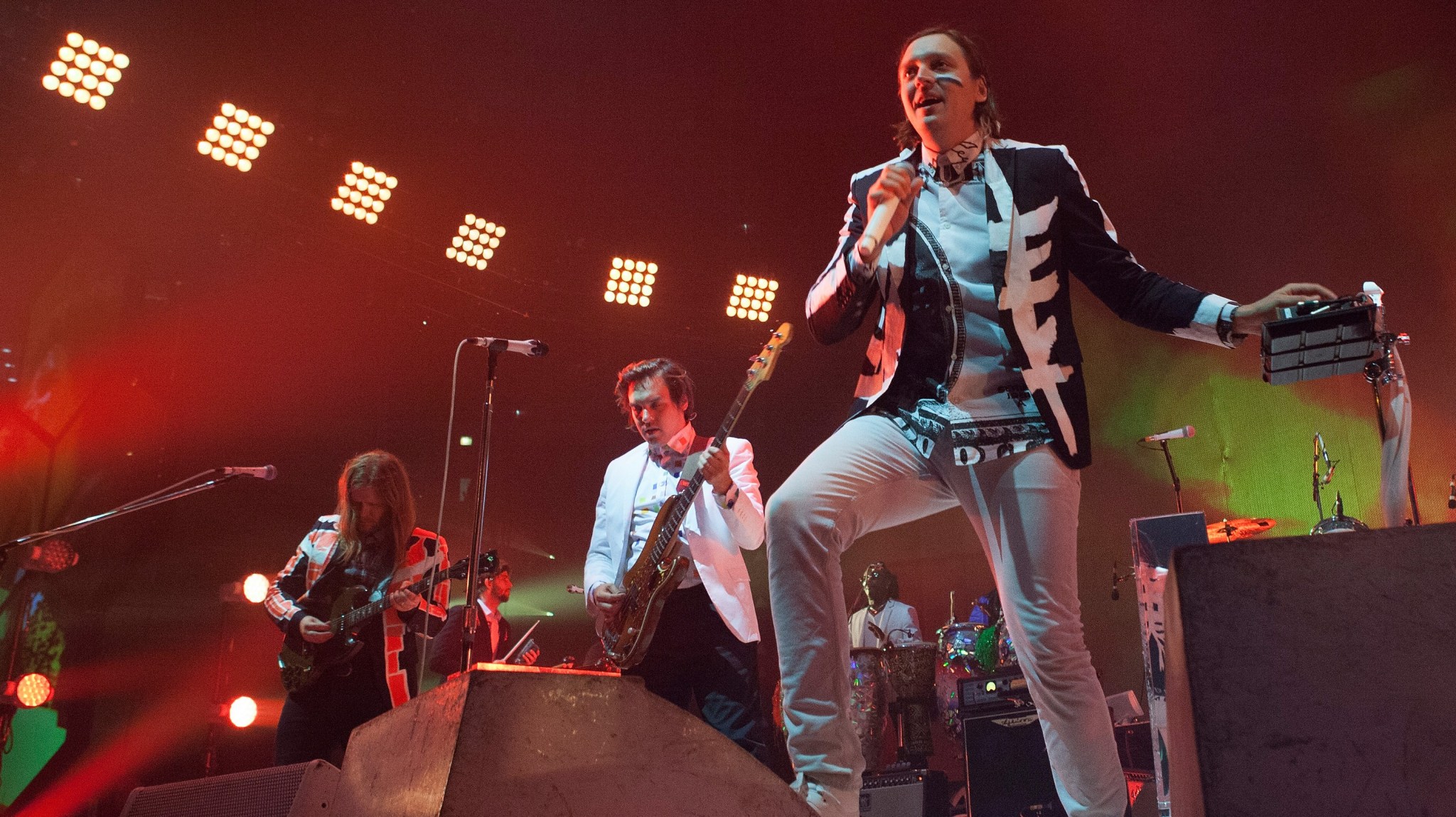 About 20 minutes into The Reflektor Tapes, an inscrutable sorta-documentary about Arcade Fire’s 2013 album Reflektor and its support tour, frontman Win Butler ruminates off-camera about the challenge of reconciling the “philosophical, intellectual stuff I think about and the physicality of trying to make body music.” The former is illustrated via a lengthy Kierkegaard quote that flashes onscreen, the latter undermined by the film’s wan-looking black-and-white cinematography.

Also off-camera, somewhere: Bono shakes his head in exasperation and demands that millennials get off his back already.

If you’re looking for a straightforward narrative about how Arcade Fire went down to Jamaica and recorded its chart-topping fourth LP, The Reflektor Tapes is not for you. If, however, you’re into weirdly chopped-up voice-overs by rock stars nonsensically philosophizing about rock stardom laid over slow-motion footage of water and storm clouds, then The Reflektor Tapes might very well be your Stop Making Sense.

“Our lives are a lot crazier than we ever let each other in on — just in the nature of living, you know?” Butler murmurs at the film’s start. The rest of The Reflektor Tapes contemplates Arcade Fire with precisely that level of clarity and insight.

Why did I bother watching a movie about an album I once described as “a conga line into a quiet study where a stack of required reading awaits”? My love-hate relationship with Arcade Fire parallels my feelings about similarly over-reaching 21st-century rock behemoths like the Killers, Kings of Leon, Coldplay, and Muse, all of whom have tried to keep the genre relevant to mainstream pop culture. Prestige-wise, Arcade Fire has been elevated above those bands, but if you took away the Album of the Year Grammy and added wicked guitar solos, Arcade Fire would be Muse. Both are wildly pretentious and prone to unintentional hilarity in their pursuit of vaguely fascist and arguably anachronistic stadium-rock transcendence.

I don’t mean that strictly as a criticism! I like anachronistic stadium-rock transcendence, and on swaths of 2004’s Funeral, 2007’s Neon Bible, and 2010’s The Suburbs, Arcade Fire achieved more of it than any band this century. I appreciate the reference points Arcade Fire draws from, and cheer for it to pull off its lofty ambitions, because so few bands have the means or imagination to aim so high. But when Arcade Fire fails, it fails just as big.

The Reflektor Tapes is pretty meager by comparison — the closing credits take up more than 10 percent of the film’s scant 75-minute running time. (Counting the hidden track, the album is 10 minutes longer.) But The Reflektor Tapes nonetheless attempts to make a case for Reflektor being a profound statement by a band supposedly so famous that the members don’t have to be identified. And the foundation of that case is rock precedent — just as Reflektor is an amalgam of Berlin-era Bowie, the Talking Heads’s Remain in Light, U2’s Achtung Baby, and the collected works of James Murphy, The Reflektor Tapes is reminiscent of other myth-building rock documentaries. Here’s a viewing guide.

U2: Rattle and Hum

What’s enjoyable about Rattle and Hum is inseparable from what’s embarrassing — it’s like Glitter for straight white dudes, a folly of megalomania that no band consciously sets out to emulate. The potential for a Rattle and Hum is hardwired into every band that gets super popular and subsequently gets taken way too seriously. The Reflektor Tapes unwittingly resembles Rattle and Hum in the following ways:

Dont Look Back and Eat the Document

D.A. Pennebaker’s pioneering documentaries about Bob Dylan in the mid-’60s established a common trope of the “anti-myth” brand of mythmaking rock doc, which is cutting away from a musical performance at the exact moment that an audience might start enjoying it. The Reflektor Tapes does this again and again, which is a shame, because the members of Arcade Fire are a lot more exciting playing “Wake Up” onstage than they are talking about “the Arcade Fire aesthetic” off of it.

This chronicle of Radiohead’s misery during the OK Computer tour is the Dont Look Back of the ’90s, only it’s duller and uglier to look at it. Attention, Meeting People Is Easy: The Reflektor Tapes sees you on the glacial pacing and aesthetically displeasing visuals and raises on both counts.

This is not really an influence on The Reflektor Tapes, but Butler slyly references this exhaustive multi-part documentary in a clip of Arcade Fire performing “Rococo.” Butler counts off the song by repeating “sugar plum fairy,” just like John Lennon in The Beatles Anthology before recording “A Day in the Life.”

Talihina Sky: The Story of Kings of Leon

OK, this isn’t an influence at all. But it’s a more entertaining version of The Reflektor Tapes, positioning the members of an enjoyably dumb rock band as important sages of our time. Talihina Sky is also recommended for people who enjoy watching good-looking people in cool haircuts drink whiskey — as if there were a better reason for watching a rock documentary.

Filed Under: Music, Arcade Fire, Reflektor, The Reflektor Tapes, u2