Brooklyn and Boston: After the Trade 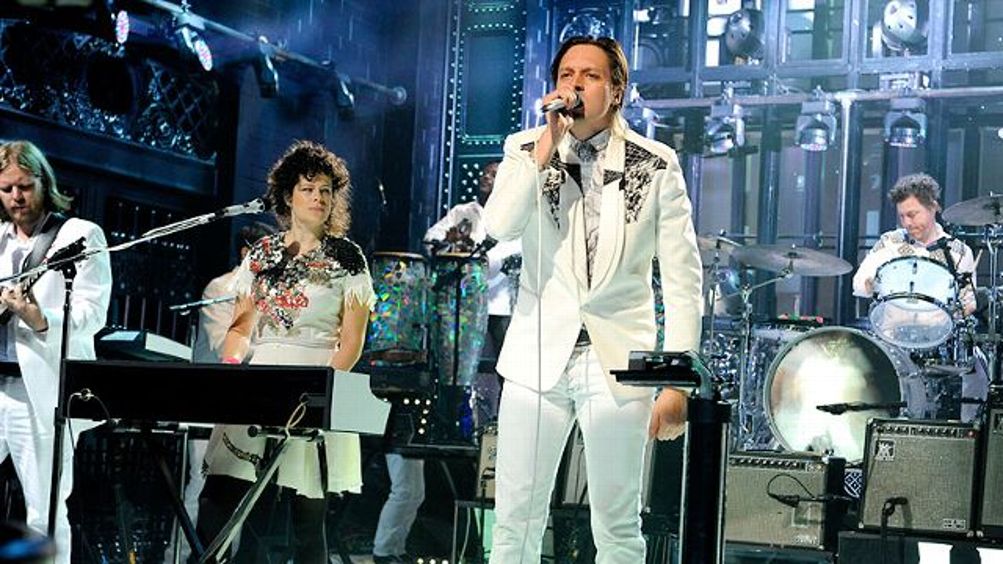 Why do so many arena-conquering rock artists wind up trying to prove to the world that they can also dance? Case in point: When Arcade Fire released the club-ready title track from its new album, Reflektor, as a single last month, it was immediately recognizable as the Grammy-winning indie band’s inevitable “loud clothes and louder disco” period. The reference points seemed obvious — the partnership with LCD Soundsystem’s James Murphy as the album’s producer recalled Talking Heads enlisting Brian Eno for their excursions into Afropop on records like Fear of Music and Remain in Light and U2 using Eno as a guide into Europop and industrial grime on Achtung Baby. While the comparison was less common, it wouldn’t be insane to point out that Coldplay made a similar creative decision just a few years ago, employing Eno when it started dabbling in electronic music on Viva la Vida and Mylo Xyloto.

Anyway, I think there are two reasons why rock stars who have reached the highest level of prestige and popularity in their respective eras have chosen to go this route:

1. Dance music (unlike rock music) is non-hierarchical; it idealizes the audience, not the performer. Rock artists who feel insecure about being perceived as bloated or pretentious have long co-opted the genre’s rhetoric (and a few superficial signifiers of the actual music) in order to appear less elephantine and restore some of their populist luster.2 Also, unlike rock, dance music is naturally campy and ironic, which makes it seem more self-aware and (in the right hands) smarter. Ultimately, it is a costume — figuratively as a pose and sometimes literally as a sartorial option3 — for rock bands that want to look less like rock bands while remaining essentially rock bands.

2. There’s an undeniable honesty to a sinewy beat or pulverizing bass line that more traditional rock instrumentation doesn’t necessarily have. In other words, if people dance, it’s because the music has elicited an involuntary physical reaction in their bodies. It’s like comedy — if something works, you laugh. For a band that has graduated to an arena environment, with its phony applause and fake encores, creating music that people can’t help responding to (or not responding to) is plainly appealing. It is conceivably the only way to feel like what you’re doing is still real.

Arcade Fire has been obsessed with “real” over the course of its four albums, which have dealt with (in chronological order) death (it unites us), religion (it keeps us apart), the breakdown of culture into a series of physical and emotional niches (it must be transcended), and, on Reflektor, the innate alienation of experiencing life strictly via telecommunication devices (see previous album’s lesson). Reflektor‘s origin story is appropriately epic for an Arcade Fire album — it was inspired by the band’s travels in Haiti and mostly recorded in an abandoned Jamaican castle. (No mere recording studio could house this much ambition.) Lyrically, Reflektor alludes to the 1959 film Black Orpheus and Kierkegaard’s prescient 19th-century essay on the reflective age. Coincidentally, it’s not a party record, though there is one track (“Here Comes the Night Time”) that nods in the direction of Haitian festival music. But really, Reflektor is a conga line into a quiet study where a stack of required reading awaits.

Given that Reflektor arrives three years after The Suburbs, which cemented Arcade Fire as the top (and perhaps only) “big ideas” rock band of the young century, it’s a little surprising that only one song (“Flashbulb Eyes”) explicitly addresses the group’s recent fame. (Win Butler apparently harbors actual fears about cameras stealing his soul, like the kids in art school said they would.) But upon closer inspection, the whole album is clearly affected by Arcade Fire’s newfound rarefied status. Reflektor, like previous Arcade Fire albums, is about a grand search for enlightenment, but unlike previous Arcade Fire albums, it does not achieve it.

I’m still not sure whether this was intentional. Yes, this album is “sprawling” and “less direct” and more about giving you soundscapes to get lost in than arriving swiftly at a satisfying hook. And this undoubtedly represents a departure. The charge of listening to Arcade Fire before now — particularly live, though also for long stretches of their uneven but spectacularly hammy albums — was knowing that no band was going to work harder to blow you the fuck away, or succeed at doing so more often. On Reflektor, however, the focus has shifted from bombastically scaling mountains to methodically traversing low-flung valleys. Instead of the orchestral sweep of the first three records, Arcade Fire has rebooted as a rhythm-oriented outfit. This requires an entirely new skill set that this band simply does not have.

As an Arcade Fire fan that was converted (after not being entirely persuaded by Funeral or Neon Bible) by the insightfulness of The Suburbs and the band’s stirring live shows, I find Reflektor to be frankly dispiriting. I’ve tried repeatedly to commune with this endless, oddly chilly record and have felt constantly rebuked. (I’ve taken to calling it Deflektor.) It is a singularly uninviting entry in the band’s catalogue — as body music, it’s downright lethargic, moving with the awkwardness of a dancer who shakes his hands twice as much as his hips. There is virtually no sense of drama in these songs, which is shocking for an Arcade Fire album. They simply plod along for more than six minutes at the same laborious pace, a collection of diffidently performed grooves in search of a point. (If you wanted the French-Canadian 20/20 Experience, voilà.)

As overblown as Arcade Fire has sometimes sounded in the past, there was never any question about its commitment. Even if you believed this band was operating on a script written in 1981 for grandiose rock bands, at least you never noticed them reading the cue cards. But Reflektor just feels … forced. It’s the “we’re winking at ourselves and you” record that bands are required to make after success has painted them into a corner. (Check the groan-worthy part in “Normal Person” when Butler trolls, “Do you like rock and roll music? Because I’m not sure I do.” It’s, like, meta.) It’s just that on Reflektor Arcade Fire doesn’t sound liberated, but trapped. 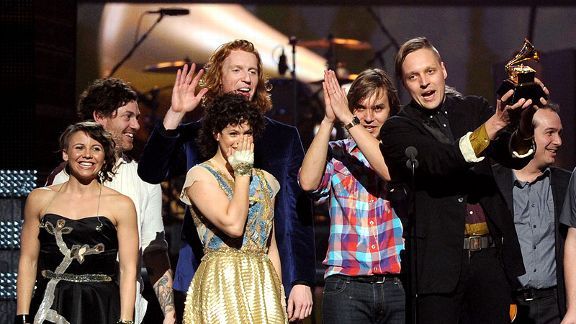 If the heat isn’t working, the problem usually resides in the engine room. Arcade Fire’s rhythm section has never been asked to be more dynamic than what’s required on Reflektor — there are stabs at Jamaican dub (“Flashbulb Eyes”), flinty punk (“Normal Person”), New Wave power pop (“You Already Know”), and homages to the dead-eyed Drive soundtrack (“Porno”). While this adventurousness is admirable when considered in a vacuum, as music it exposes a deadly weakness for a band mounting a project like Reflektor: Arcade Fire is chronically unfunky. That walloping “We Will Rock You” beat on “Wake Up” surely was murderous, but the mysteries of syncopation continue to elude them. James Murphy must’ve realized this between accepting the job and cashing the paycheck, as he appears to have left his excellent collection of cowbells at home. Why bother? Listening to Arcade Fire maneuver its way through a panorama of polyrhythms on the title track or the draggy “It’s Never Over (Oh Orpheus)” is like watching a 747 try to fit into a tight pair of hot pants.

More troubling than Reflektor‘s clumsiness is its discernible lack of exigency. Since Funeral, Arcade Fire has been on the same “major statement every three to four years” album cycle that U2 established in the ’80s. We’re used to this band reappearing with a fully formed conception of its latest self with the regularity of the Olympics or a presidential election. By that standard, Reflektor is dreadfully undercooked. Again, it’s possible that this is by design, and that Arcade Fire is trying to be a little spontaneous for once. The most enjoyable parts of Reflektor sound the most tossed-off, particularly the jangly “You Already Know” and the glam-rocking “Joan of Arc.” But spontaneity just isn’t Arcade Fire’s way. This is a band that thinks hard about everything and wants you to know it’s thinking hard about everything. What’s more likely is that Régine Chassagne is going to spend the next two years climbing in and out of mirror boxes for concert audiences around the world. And every time she does this, it will be reminiscent of This Is Spinal Tap and PopMart.4 As a dubious set of concepts, Reflektor has locked up Arcade Fire, and you can already detect rigor mortis setting in.

I’m not going to declare this album a disaster. After playing Reflektor a dozen times in the past five days, there’s a 62 percent chance I’ll want to play it again. But it’s easily the worst album Arcade Fire has made. If Reflektor was intended to make Arcade Fire appear less bloated, it’s a failure. If it was meant to distill the band’s music down to a purely physical essence, it’s a failure. If it was supposed to present the band in a more down-to-earth, approachable guise, it’s a failure. In each case, I’d argue that this record does the exact opposite. This is the most distended, most fumbling, and most distant edition of Arcade Fire yet. Reflektor is the one thing I never thought Arcade Fire would be: fake.