So, What Was New at Coachella II? 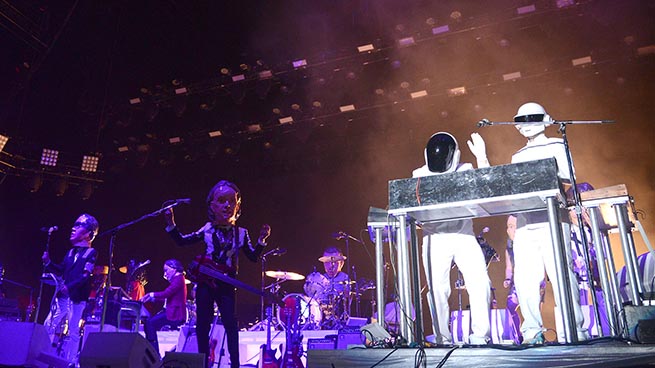 In the festival’s third year doing the back-to-back-weekends thing, Coachella II featured the same players and vaguely different experiences. The biggest talking point, the bit to soothe your weary Southernplayalisticadillacmuzik-loving heart, is that Outkast smoothed out the kinks that hovered over Coachella I. According to plenty of reputable sources, André 3000 and Big Boi seemed to have a better time, trimming their set list, shortening their solo sets, and inserting “Hey [SONG OF THE MILLENNIUM] Ya” into the middle of the evening rather than tacking it on at the end. You may now breathe easy (… or slightly easier), prospective attendees of summer 2014 Kast-fests.

Last weekend, Jay Z showed up to kick it with Nas for a few songs. This time, because Hov has a fair and beneficent uncle role to uphold, he showed up for a five-minute medley during Pharrell’s set. (Usher, Pusha T, and T.I. popped up, too.) Hit the 2:10 mark in this clip if you don’t believe me.

Then there was the part where Daft Punk may or may not have appeared at the beginning of Arcade Fire’s set, for whatever reason.

“It is unclear, however, whether the two were in fact Daft Punk members Thomas Bangalter and Guy-Manuel de Homem-Christo or if Arcade Fire were simply punking the Coachella audience,” Billboard writes. Then, to pile on to the confusion: “Towards the end of the set, Beck appeared to sing a cover of Prince’s ‘Controversy’ with the band. The artist wore the same pope costume that Breaking Bad actor Aaron Paul donned the previous weekend.” Beck appeared to sing … but he definitely wore a very specific costume. Looks like we’ve got our Great Mystery of Coachella II 2014.

And now we’ve built up to the most unexpected portion of all, the Replacements. Front man Paul Westerberg — who reportedly seemed pretty bitter about poor attendance during their set last weekend — chilled on a couch and allowed Billie Joe Armstrong to handle mic duties for most of the set. “We’re the world’s greatest Replacements cover band,” said Westerberg, whose official explanation for his couchiness was a back problem, which is the most ’80s-band-reuniting-in-2014 thing that could ever happen.

We Went There: The Live Read of Quentin Tarantino’s (Probably Not) Abandoned ‘Hateful Eight’ Script

‘Parenthood’ Cry of the Week: The Final Cry